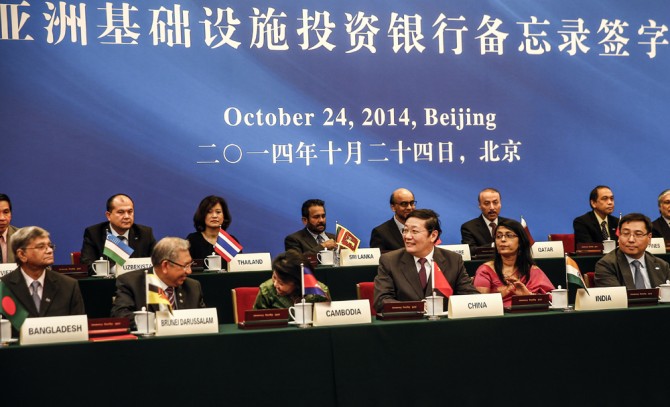 When the UK ignored the special relationship and threw its weight behind the China-led Asian Infrastructure Investment Bank on March 12, it secured the future of a project crucial for Beijing’s long-term goals.

Historians may call March 2015 a watershed for China, and the rest of the world.

After more than three decades of Reform and Opening-up, China has won the support of major Western powers as well as its Asian neighbours to transition from ‘‘apprenticeship,’’ where it plays by the rules of a game set by others, to ‘’leadership,’’ which empowers Beijing to set its own rules. The UK, meanwhile, has defied its closest strategic ally and emerged as one of China’s strongest supporters in West.

Six years after the Great Recession began, China’s efforts to establish the Asian Infrastructure Investment Bank (AIIB) have unleashed a political storm. While a multilateral investment platform designed to more efficiently develop Asia’s infrastructure is welcome, and long overdue, suspicion and opposition from Washington has kept many US allies at bay, until March.

Indeed, when 21 mainly Asian countries signed a memorandum to from the AIIB in Beijing on October 24, 2014, three crucial players were absent: Australia, South Korea, and Japan, the three major US strategic allies in Asia.

The US ostensibly trumpeted the transparency of financial institutions such as the World Bank and the International Monetary Fund, intimating that the newly created AIIB would fail to meet the high standards required of an international lending bank. US Assistant Secretary of State for East Asian and Pacific Affairs Daniel Russel said that it was ‘‘up to each individual country’’ whether or not they would join, but also reiterated US calls for ‘‘high standards.’’

Many have pointed out that the real motive behind Washington’s opposition is concern that the AIIB would be competing directly with both the US-led World Bank and the Asia Development Bank, and that China would use its new ‘‘tool’’ as a soft power channel.

The UK, which found itself rebuked for signing up to the AIIB, has been a major beneficiary of China’s rise, with bilateral trade doubling in the past few years, to reach a projected US$100 billion by the end of 2015. The UK government has plans to turn London into the biggest European offshore market for the Chinese yuan, and has become the first country to issue yuan-backed treasury bonds, some US$500 million at the last count.

In short, London has every reason to exploit opportunities created by the AIIB. Even though a formal charter is still to be negotiated, the China-led AIIB will exist mainly to fund Asian energy, transport and infrastructure projects. Britain’s decision to be the first European nation to throw its weight behind the project, overruling the misgivings of its own Foreign and Commonwealth Office, gave it a crucial early bird advantage.

It’s worth noting that the UK has a wealth of experience in establishing financial infrastructure and dealing with overseas development. By offering the considerable resources of the City of London to the AIIB, the UK’s membership will likely benefit all concerned, though its support for a China-led multilateral development project has come at a price.

The UK’s move clearly wrong-footed the United States, prompting an unusually frank rebuke from Washington, accusing the UK of ‘‘constant accommodation’’ of China. However, the ball was already rolling, and Europe’s two biggest economies – France and Germany – soon followed London’s lead. After staunch US ally South Korea announced its decision to join the bank, Australia, which had previously been publicly lukewarm towards the project, also signed up.

Both the IMF and the Asia Development Bank have now voiced their readiness to cooperate with the AIIB. US Treasury Secretary Jacob Lew has also made a visit to Beijing and confirmed that the US ‘’looks forward’’ to working with the AIIB.

China’s triumph is testament both to its economic clout and its increased prominence on the international stage. If three decades of Reform and Opening-up have enabled the country to seize the development opportunities presented by globalisation then the establishment of the AIIB marks the beginning of China’s transition from rule-follower to rule-maker.

China has spent decades observing and integrating itself into international norms. Now it needs to improve and innovate on what has gone before. For the first time in its modern history, China is combining diplomatic and economic strategies designed to take the country further along a development path that can incorporate US strategy in the Asia-Pacific region and accommodate its own ‘‘new normal’’ of slowing domestic growth.

On the same day that Chinese President Xi Jinping gave his keynote speech at the Bo’ao Forum for Asia, with the theme ‘‘Asia’s New Future – Towards a Community of Common Destiny,’’ China published its official road map for its One Belt, One Road initiative – re-establishing a new overland Silk Road economic belt through Central Asia to Europe alongside a 21st century Maritime Silk Road linking Asia’s key maritime trading hubs.

With a growing war chest of foreign exchange reserves to draw upon, China, increasingly frustrated by the restrictions imposed by other international financial platforms, set up the BRICS Development Bank in 2013, created the AIIB in October 2014, and announced its Silk Road Fund of US$40 billion in November 2014. The latter two institutions will be crucial to China’s realisation of its grand economic plan, although, for now, they remain supplementary to the existing world order, with the actual rule-making yet to come.

It may be premature to declare what Joseph Stiglitz termed ‘’the Chinese century,’’ but China certainly has the desire and capacity to re-draw the global trade map along its own lines. The global financial crisis exposed the inherent limitations of US- and Eurocentric capitalism, and the inherent weaknesses inside the global financial system. Will China be able engender deep enough reform to produce a new paradigm?

What is certain is that as of 15 April, 57 countries have signed up to join the AIIB. When it comes to money, it seems, China has no shortage of eager partners.

China Report | by China Report Chatham House: China’s Economic Challenges
Experts at a China conference organised by the global think tank – Chatham House – are cautiously optimistic about China’s economic future. Forty years of economic reform and growth have […]
Cover Story | by Yu Xiaodong Global Scope, Local Priorities
In its latest defence white paper, China envisions greater military capability and a global role for the PLA In the past couple of decades, China’s defence policy has been a […]
China Report | by Li Jia and Liu Yutong Private Power
Despite unabated political tension, cultural exchanges between China and Japan have increased in recent months. These ties are expected to help ease diplomatic strain A 3,000-member Japanese delegation of tourism […]
China Report | by Yu Xiaodong An Asian Century?
Amid border disputes and a strategic rivalry, China and India seek to improve economic ties and develop mutual trust “India is ready for business,” Narendra Modi told a group of […]