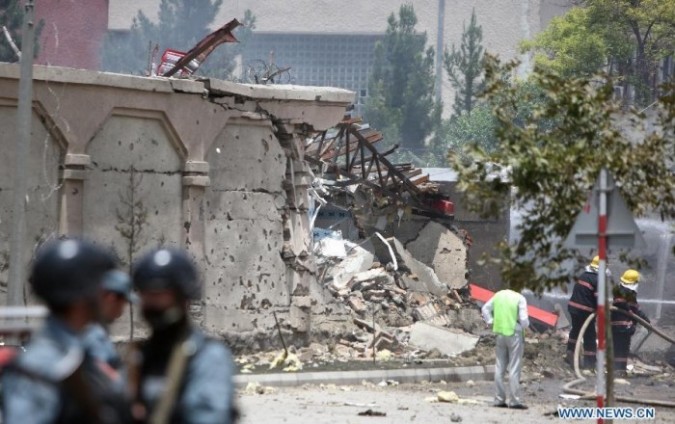 A Taliban attack on the Afghan parliament in Kabul has ended with the deaths of all six gunmen. Insurgents reportedly detonated a car bomb outside the parliament as politicians gathered to debate the appointment of a new Defence Minister. After entering the compound through breached gates, attackers were repelled from the parliament building itself before entering an adjacent building and firing down on the chamber. Police evacuated politicians while trying to fight off the gunmen. The battle is reported to have lasted for around an hour. Aside from the six gunmen killed, 18 people are reported to have been injured. A separate explosion has also been reported in Kabul by local media. The Taliban has said that the attack was intended to coincide with the debate over the new Defence Minister’s appointment. The dramatic attack’s timing was intended to serve as propaganda for the militant group. Militant violence has increased in Afghanistan following the withdrawal of US and NATO troops last year.

Thousands of non-EU nurses working in the UK could be forced to leave the country under new immigration rules. The introduction of new restrictions would mean that workers will have to leave Britain if they are earning under £35,000 after six years. The Home Office says that the rules are aimed at reducing net migration by reducing demand for migrant labour. The Royal College of Nursing (RCN) union has criticised the plans, saying they would “cause chaos” for the National Health Service (NHS), reduce nurse numbers, and waste millions of pounds spent on recruitment. The RCN estimates that 3,300 NHS nurses could be affected by the rules by 2017, with the figure doubling by the end of 2020. The RCN emphasised the national shortage of nurses in its criticism of the rules.

Greece, Europe and the National Health Service (NHS) are the topics in the headlines today. The Guardian reports that “Last-ditch talks” are being held to avert a Greek debt default. Brussels is hoping to offer a “six-month reprieve” and €18 billion in rescue funds, the paper writes, as Greek Prime Minister Alexis Tsipras weighs up a response. The Financial Times writes in its headline that Tsipras has been urged to strike a deal ahead of Monday’s emergency summit to discuss the issue. According to the paper, EU leaders have told Greece they will not negotiate a deal during the summit itself, and that an agreement should be reached in advance. The Independent leads with news that new government immigration laws will cost the NHS “thousands of nurses”. Under proposed Conservative immigration laws, non-EU staff on salaries under £35,000 after six years will be deported. The Daily Telegraph leads with a demand from a group of business leaders and economists that Britain should “Seize EU powers, or walk away” from Europe. The group have said that if the Prime Minister “must be prepared to pull Britain out” of Europe if he cannot win “key concessions”. The Times leads with news that Knife crime is on the increase in Britain “as stop and search falls”. Metropolitan Police Commissioner Sir Bernard Hogan-Howe has said that youth knife crime has risen following government pressure to reduce the number of stop-and-search checks.

On the Yulin dog meat festival: most UK media outlets have featured some coverage of the Yulin dog meat festival, following animal rights concerns for the event. The BBC writes that the festival is underway amid an “uproar” from animal rights activists. The festival itself “began in recent years”, the BBC reports. The Independent writes of an “international outcry” over the festival. The Independent and The Daily Telegraph feature a report of a woman, Yang Xiaoyun, who spent £700 to rescue 100 dogs from the festival. The Guardian features a video report on Yang, and notes elsewhere that opposition to the festival is “rising among China’s growing middle class”.