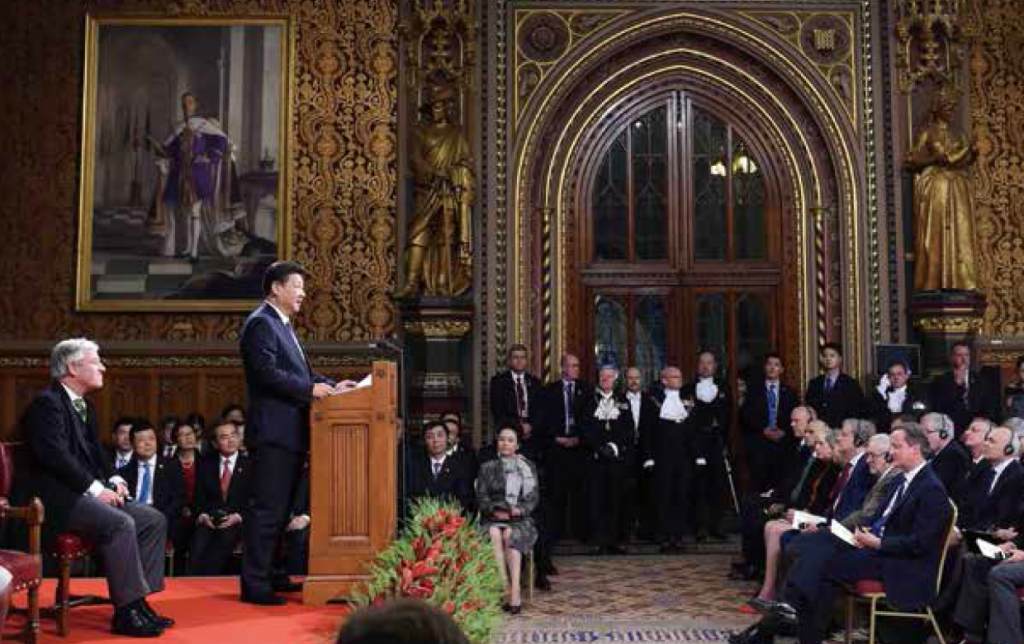 Global power shift doesn’t happen in a day. We have just witnessed one chapter of the historic event, as President Xi Jinping concludes his state visit to the United Kingdom, once the seat of an empire on which the sun never set. Xi is the third Chinese head of state to have been the Queen’s guest since 1999, but even to the casual observer, the attention lavished upon him this time round could not go unnoticed.

Jiang Zemin was the first to set foot on the British Isles, for a three-day visit as part of a six-nation tour. At the time, China was number seven globally in terms of economic output, behind Italy. When his successor Hu Jintao arrived in London six years later, double digit growth had helped China to overtake Italy, France, and the UK (just), to claim the number four spot.

During Hu’s visit, his British hosts were preaching moral diplomacy and lecturing their Chinese guest on democracy and human rights, reducing him to a defensive posture in which Hu argued that China’s situation required his government to focus on poverty relief.

Ten years later, President Xi, leader of the world number two economy, was greeted by the same monarch, but amidst pomp and ceremony of a very different kind. Her Majesty’s government, as well as top politicians and business figures, have adopted a totally different approach to the Chinese leader, who was accorded a 21-gun salute and a private meeting with the UK Prime Minister at Chequers, his country residence.

In return, Xi’s hosts were handed trade deals worth more than £40 billion.

This has led to some complaints and even derision that the UK is kowtowing to China in order to fund large infrastructure projects like the Hinkley Point nuclear power station and the controversial HS2 high speed rail link from London to central and northern England.

Broadcaster and writer Martin Jacques commented that the UK had taken “a long and deep breath” regarding its approach to China after relations nosedived in the wake of a meeting between Prime Minister David Cameron and the Dalai Lama. The government, especially Cameron and his chancellor George Osborne, came to the conclusion that it is in the national interest to change tack. Their first opportunity came in March this year when the UK government shocked its US ally by electing to join the China-led Asia Infrastructure Investment Bank (AIIB). It appears that the UK is re-aligning its strategic interests when it comes to a global shifting of power structures, just as it did when it threw in its lot with an ascendant USA in the run-up to the Second World War.

Something deeper, more fundamental and more encompassing appears to be at play. During President Xi’s state visit, the Chinese president repeatedly called upon both sides “to seize the hour and seize the day,” to build a new relationship in order to deal with the many problems humanity faces. His British hosts might have substituted “global strategic partnership” in the place of what the Chinese delegation referred to as a “comprehensive strategic relationship,” but the rhetoric focussed on dealing with global issues such as climate change, drug-resistant disease, and education and development in Africa.

The UK is playing to its strengths in acting, in a sense, as a would-be kingmaker by being one of the first European governments to throw its support so obviously behind China. Voicing approval for Xi’s showpiece trade initiative – the One Belt, One Road strategy – and overhauling unpopular visa restrictions on Chinese visitors to the UK (whose universities currently accommodate some 150,000 Chinese students), are just the start. New support for Chinese language learning and cultural exchanges, specifically the Chinese government-sponsored Confucius Institutes is also designed to open up British hearts and minds to a stronger bilateral relationship.

On its part, China is finding a guide and companion in fulfilling its desired role as a truly global leader. When the “golden decade” comes to a close in 2025, when Hinkley Point is expected to go online, China may very well have become the world’s number one economy, and Britain might find itself with privileged access to a coveted marketplace.