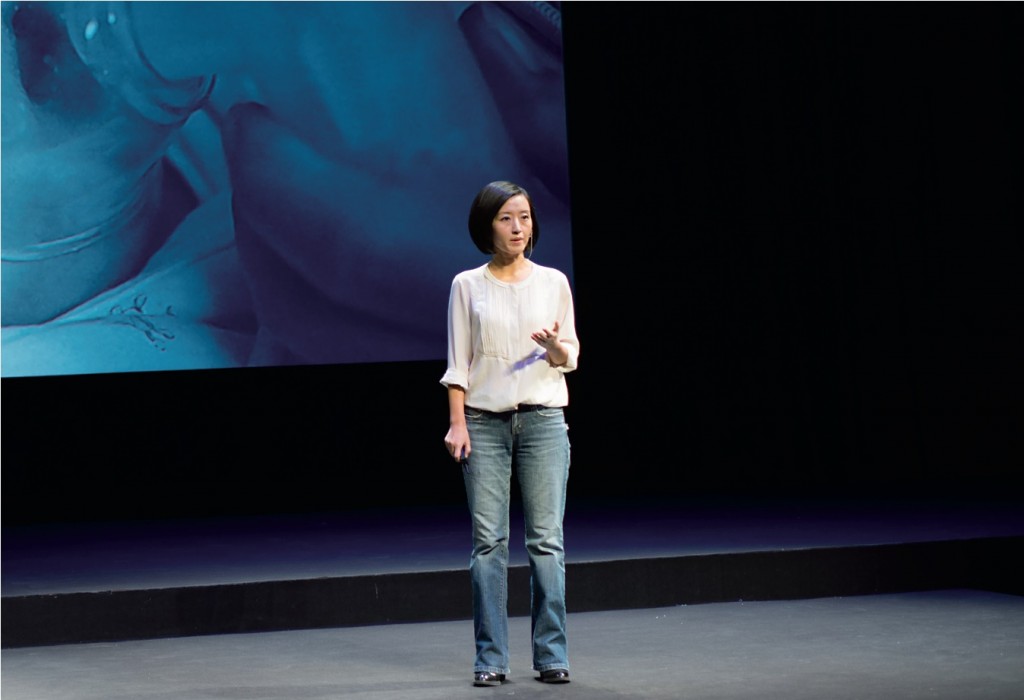 An independent documentary discussing China’s air pollution problem, released online in February and erased from most video sharing websites in March, has rekindled debate over how best to tackle the country’s most pressing environmental issue

Within three days, Under the Dome received over 150 million views and attracted millions of comments from netizens. Then, on March 6, 2015 the documentary was swiftly removed from most Chinese video sharing websites.

Over the previous decade, as an investigative reporter for the State-owned China Central Television (CCTV), Chai Jing earned her household-name reputation through coverage of major national news stories including the Severe Acute Respiratory Syndrome (SARS) outbreak in 2004, the 2008 Wenchuan earthquake, coal mine accidents and issues surrounding environmental pollution caused by coal mining in her home province of Shanxi. In 2009, Chai quit reporting and took up a position as an anchor on popular CCTV current events talk show One on One.

Chai finally resigned from her job with CCTV in 2014 following the birth of her daughter. Under the Dome, named after a US TV series based on the novel by Stephen King, marks her return to the public eye. Chai’s “Dome” is the smog that frequently obscures the sky above many places in China.

Under the Dome is presented in the format of a TED Talk, combining a lecture with computer animation embedded with graphical data and animation interspersed with recorded interviews. Chai’s film opens with a slideshow demonstrating the PM2.5 (units of particulate matter no more than 2.5 micrometres in diameter found in the atmosphere) curve for Beijing in January 2013, when the city experienced 25 days of unacceptable smog in a single month. Chai discovered her pregnancy that same month, and seeing 25 provinces and cities in China blanketed by heavy smog at that time added to existing fears after her unborn daughter was found to have a benign tumour already growing on her body.

“I’d never felt afraid of pollution before, and never wore a mask,” says Chai during her presentation. “But when you carry a life inside you, what she breathes, eats and drinks are all your responsibility, and then you feel the fear.”

PM2.5 is widely accepted as being particularly hazardous to public health as it can penetrate the alveolus – the gas exchange region in the human lung. “I perceived smog through my daughter’s eyes,” Chai recalls, describing how her newborn daughter would be confined indoors on smoggy days, often slapping the window, as Chai perceived, to express her desire to play outside.

“This is a personal grudge against smog,” Chai tells her audience, adding that she made Under the Dome in order to answer three major questions – what is smog, where does it come from, and what should we do about it.

To back up her claims, Chai interviewed professionals from academic institutes in China and abroad, approached government think tanks, State ministries and environmental departments, took field trips to polluting factories and even former smog hotspots like London and Los Angeles, where she looked at the history of industrial air pollution, and explored potential solutions possibly applicable to China.

Through the use of multimedia platforms, scientific data and interviews with researchers and government officials, the documentary identifies the wide usage of substandard and low quality fossil fuels and the lack of government supervision as the primary contributing factors to China’s smog problem. Chai calls for government action in regulating polluters, improving the enforcement power of relevant government departments and individual participation in combating pollution. According to Chai, Under the Dome is also an “answer” that she has been preparing for when her daughter grows up. Many attribute the power of Chai’s film to her willingness to place her family at the centre of the project.

Chai’s film premiered on the website of the People’s Daily, and swiftly inspired an unusually passionate public and mass media response. Soon, clips were circulating across China’s vibrant social media landscape, and Chai was being lauded by users of instant messenger WeChat and microblog site Sina Weibo for funding the project with her own money. Others singled out her bravery in being willing to speak out on issues such as the power of the State energy lobby and bureaucratic obstructions to cleaner air – problems which rarely gain prominence in official media coverage of pollution.

Indeed, Chai’s status as a concerned parent rather than a TV reporter was seen as helping her connect with a broad audience. Painting air pollution as a clear and immediate threat to all Chinese people, regardless of social status, Chai struck a chord that few celebrities-turned-activists have been able to. Actor Sun Yizhou commented on his microblog account on February 28: “Everyone watch. Regardless of where you are from, whatever your social position, this is a fate that we must collectively face.”

“So profound! There has never been such a comprehensive dissection of PM2.5,” ran another Weibo post applauding Chai’s work.

While the praise was fervent, criticism also emerged as Chai’s film became increasingly ubiquitous. Some questioned the morality of Chai explicitly linking her daughter’s tumour to air pollution. Others accused her of being a lackey of the State, given the official support afforded her project by numerous government organs, particularly Party mouthpiece People’s Daily Online. Peking University professor Wu Jing called the film a typical example of celebrities “promoting themselves” for commercial gain or to obtain public funding while masquerading as concerned citizens.

Some even accused Chai of hypocrisy for “pretending to care about China’s problems” even though she chose to have her baby delivered in the US. Others spread rumours that Chai was a smoker, and chose to drive a gas-guzzling SUV.

When most links to Chai’s film in its entirety were expunged from the Chinese Internet, however, much of this criticism subsided. In professional circles, environmental advocates, including China’s new minister of environmental protection Chen Jining, sent personal messages to Chai to thank her for raising public awareness of environmental issues. Nevertheless, certain scientists and industrialists pointed out factual inaccuracies in Under the Dome, while others accused Chai of singling out the coal and oil industries for attack while neglecting other major contributors to the pollution problem.

The ongoing debate surrounding Under the Dome has come alongside a major leadership reshuffle in China’s Ministry of Environmental Protection. Minister Chen Jining, a former president of Tsinghua University, even likened the documentary to Silent Spring, ecologist Rachel Carson’s landmark exposé of profligate use of synthetic chemical pesticides which helped inspire a generation of environmental activists in the 1960s.

The film’s release, which just preceded the annual gathering of the National People’s Congress and the Chinese People’s Political Consultative Conference, popularly referred to as the “Two Sessions,” was interpreted as a bid to have China’s smog problem become a leading item on an agenda dominated by the economy and the Party’s ongoing anti-corruption campaign.

Despite being removed from most Chinese video sharing websites, the film’s social impact has already been felt in a number of fields. An environmental protection hotline mentioned in the film, which allows members of the public to notify the authorities of illegal emissions, was flooded with calls following the film’s release. Although this national hotline has existed since 2001, many have claimed that if it weren’t for Under the Dome, few members of the public would have known about its existence.

“The hotline does play an effective role in supervising local environmental protection bureaus taking action to combat pollution,” Beijing resident Yan Yan, 35, told ChinaReport. A passionate environmentalist, Yan has personally called the hotline on a number of occasions since 2005 to report air and water pollution issues in her community. According to Yan, all these cases were followed up on by her local environmental protection bureau.

According to Zhong Chonglei, head of the Beijing Environmental Monitoring Team, all calls made to the hotline are recorded and forwarded to relevant local departments within 24 hours, with a follow-up by government personnel also guaranteed.

On 1 March, 2015 the Ministry of Environmental Protection also launched a new public WeChat account to allow users to upload photos and written descriptions of pollution, with all reports accessible to local authorities who can then inform users of any follow-up action taken.

Chai’s documentary has even been credited with helping boost the share price of many “environmentally friendly” companies. On 1 March, more than a dozen stocks in the fields of pollutant treatment, air quality monitoring and green technology saw huge increases, with several stocks jumping 10 percent or more to reach their daily trading limits.

In her documentary, Chai Jing tells the audience how “smog” was once described by weather reporters as “fog,” with most ordinary Chinese citizens, herself included, barely noticing the horrendous air pollution blanketing their towns and cities. “Smog” as a concept only really entered the Chinese psyche in 2012, when the US embassy in Beijing publicised its PM2.5 monitoring data to indicate the local air quality. Under pressure from social media, the municipal government began to publish its own data, and a rash of record-breaking readings in recent years has turned smog into a national issue.

According to a report by the World Health Organization, it is estimated that 2.8 million of the premature deaths caused worldwide by air pollution in 2012 were clustered in China and the Western Pacific region. Statistics from China’s Health Ministry indicate an annual number of premature deaths due to air pollution of 350,000 to 500,000.

Zhang Jin, deputy managing editor with Caixin Media, commented that Chai’s delivery, not her source material, was what made Under the  Dome groundbreaking. “Frankly speaking, the content and viewpoint presented in the documentary are not new… [yet] its influence is much stronger than ours. We can only learn from Chai’s technique in delivering information.”

While air pollution was a leading topic of discussion in the State media in 2012 and in the first half of 2013, the Party’s national security and anti-corruption agenda soon took precedence, with coverage of environmental issues being softened or sidelined even as face masks and air purifiers rapidly become features of everyday life.

Action has, however, been taken. A new environmental protection law enacted on 1 January, 2015 was hailed as China’s toughest environmental law yet. In late February this year, inspectors from the Ministry of Environmental Protection summoned mayors from two northern cities, urging them to crack down on violators of the national environmental law. However, grassroots activism, despite being showered with outward praise, remains unwelcome in the corridors of power. Days after Under the Dome was erased from China’s video sharing websites and online media outlets, minister Chen Jining called for “greater transparency” in the fight against pollution, and encouraged greater public participation in anti-pollution efforts.

Although Chai Jing’s efforts have kept the pollution debate alive, the fact that the same government supporters who gave her a platform have since attempted to mute her message shows that China’s political establishment remain sensitive to criticism when it comes from the general public. The long-term effectiveness of Under the Dome to engender real change on a national level will hinge primarily on whether or not Chai’s work can be rehabilitated into mainstream discourse.

China Report | by Li Teng and Wang Yan In Nature’s Name
Government officials have been caught profiting from composing fabricated environmental assessment reports, a practice that the Ministry of Environmental Protection has finally vowed to curb. ChinaReport speaks to whistleblowers who […]
China Report | by Wang Yan Toxic Torrent
An increase in citizen reporting and NGO activity has exposed water pollution as one of the most hazardous side-effects of China’s economic miracle. With heavy-polluting industries often forming the backbone […]
China Report | by Wang Yan An Inevitable Flashpoint
An explosion at a controversial PX chemical plant, its second accident in 20 months, has further fuelled criticism of ongoing government support for construction of potentially dangerous and environmentally unproven […]