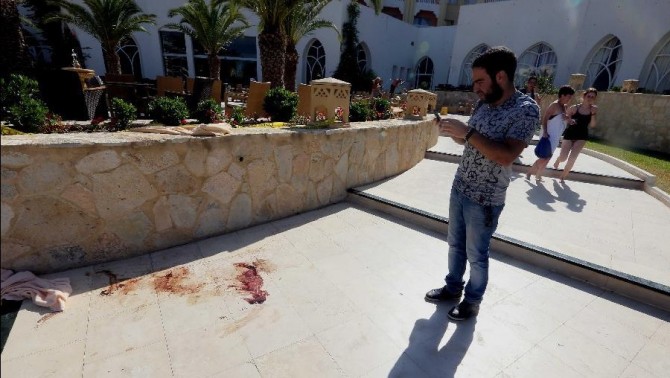 The UK should expect a high death toll from the Tunisian terror attack, Prime Minister David Cameron has warned. 38 people are confirmed to have been killed after gunmen stormed a beach resort and the Hotel Imperial Marhaba. Eight Britons are among the dead. Speaking after an emergency response meeting, the Prime Minister said that the UK was working with Tunisian authorities, but that many of those killed were British. The Prime Minister condemned the attack, and reiterated the government’s aim to fight radicalisation. Islamic extremist group Islamic State (IS) has claimed responsibility for the attack, with the gunman identified as Seifeddine al-Razqy. Razqy was shot dead by police during the attack. Tunisia has increased security following the attack, the second major terrorist attack on tourists in the country in recent months.

Greek Prime Minister Alexis Tsipras has called for a referendum for Greece to decide whether to accept a bailout deal offered by creditors. Greece seeks further funding to make a €1.6 billion debt repayment to the International Monetary Fund (IMF) by the end of June – a payment it has already said it cannot afford. Negotiations have faltered over what Greece feels to be the harsh austerity conditions required by creditors in order to secure a bailout package. While Tsipras has said he is against the terms of the bailout deal, the referendum will put the matter to the Greek public when it is held on 5 July. It is not known if Greece’s current bailout deal will be extended after it expires at the end of June.

China’s central bank cut interest rates again on Saturday, the fourth rate cut since November 2014. The People’s Bank of China also reduced the minimum cash reserve rate, with both acts of monetary easing hoping to shore up China’s lowest growth rates in 25 years. Beijing’s monetary easing highlights concerns that bankruptcies and job losses could be caused by high borrowing costs. The move could also be intended to ease concerns following massive falls in China’s stock market over the past two weeks. Some observers have expressed scepticism that official lowering of interest rates will reduce the real cost of borrowing in China.

Friday’s terror attack in Tunisia, in which 38 people were killed, dominates the headlines today. The Independent dubs the massacre “Bloody Friday”, and notes that extremist incidents also took place in France and Kuwait on the same “day of terror”. The Guardian writes of a “Massacre on the beach” in its headline, reporting that the attacker “came from the sea to launch attack”. The Daily Telegraph writes in its headline that one gunman was “Laughing as he fired”. The paper notes that with five Britons among the dead, the attack is the “worst single atrocity since 7/7”. The Times calls the killing a “Slaughter on the beach”, reporting that the gunman in the attack has been named as Seifeddine al-Razqy. The Financial Times is the only major paper to lead with a different story, reporting that Deutsche Bank’s Chief Executive is “suspected of lying” to German authorities over the Libor rigging scandal.

On China’s stock market fall: fears for the Chinese stock market have received coverage from several media outlets in recent days, following a significant drop in the markets on Friday. The BBC features its coverage in the Business, rather than the China-specific, section of its website, writing that investors showed concern about “another wave of new listings absorbing liquidity in the market”. The Guardian reports that the plunge comes amid “fears share prices are unsustainable”. The “frenetic” buying of stocks was previously driven “by a state clampdown on property investment”. The Independent features a commentary piece with “Five facts that show how the bubble arose – and why it might be bursting”. The Daily Telegraph reports that China’s equity bubble is ‘imploding’. The Chinese stock market is edging into “correction territory”, the paper writes.