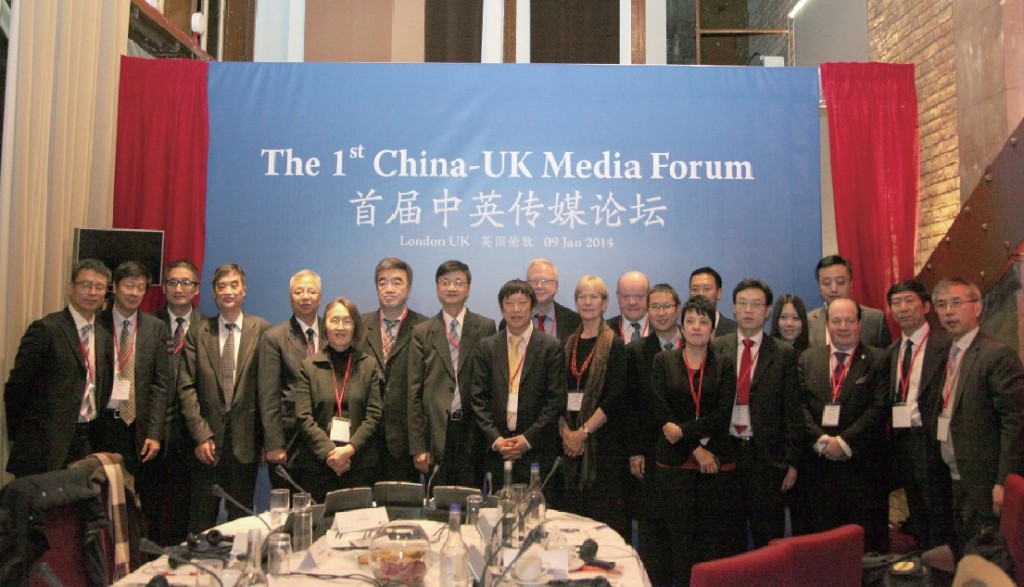 It isn’t often that a meeting takes place inside, rather than on, a bridge. But the presence of leading Chinese and UK media figures in the north tower of Tower Bridge, high above the River Thames, was intentionally symbolic.

The choice of this London landmark can be interpreted in several ways – its towers representing two prominent nations with proud histories; the stolid design of the structure hinting at an intractable attachment to past glories; the wish for communication portrayed by a bridge that divides and separates as well as descending and joining.

An observer of Chinese and British media would say that the links between them are far from perfect. A certain amount of communication is possible, but some concepts – most of them lost in translation – run off a cliff when attempts are made to turn them into common ground.

By the end of the Tower Bridge meeting, some construction work had been done. But before even that could commence, repairs were the priority.

Communication was the main issue the inaugural UK-China media forum wanted to address. A measure of the urgency was the strength of the Chinese delegation, which included prominent China Central Television (CCTV) presenter Bai Yansong. Even the combative Global Times editor Hu Xijin admitted, “We need to see how we are perceived by the other side” in his opening address.

The president of the China News Service, Liu Beixian, said those present were “keen to continue learning from each other, deepening cooperation and together responding to changes and challenges in the global media landscape.” On the opposite side of the table, leading British journalists and media executives – some fluent in Chinese – conveyed the difficulties of reporting on China and satisfying the growing demand for news as it opens up to the outside world. As the global head of video at Thomson Reuters, Tim Santhouse, pointed out, independence from biasand trust in the veracity of information were key.

Information consumers now have more first-hand experience of each other’s countries than ever before. Last year, as director of BBC news James Harding noted, 97 million Chinese travelled abroad. British TV shows such as Downton Abbey and Sherlock are hugely popular in China – the latter has even spawned a Chinese wave of somewhat lurid slash fiction. A steadily increasing number of Britons travel to China, do business there and learn Chinese. The British Minister for Culture and Communication Ed Vaizey – referring to film and culture rather than news – said he was very pleased that the British media were having an impact in China.

Ambassador Liu Xiaoming believed British and Chinese people were “moving on from simplistic and superficial understanding” of one another: the Chinese now saw Britain as creative rather than reserved, while the British saw China as dynamic rather than obscure. The media of the two countries, he said, should use this enthusiasm and fresh knowledge to drive forward China-UK relations.

That statement encapsulated the divergence between the countries’ two media systems. While it is routine for Chinese leaders to direct state media to bolster an aspect of government policy, it is anathema to British journalists to do as they’re told by anyone, even (indeed especially) if they agree with the idea they’re being asked to promote.

What the forum did not lack, however, was engagement. In robust exchanges, the Chinese side voiced irritation at the tone of much British reporting on China, while the British countered that China needed to realise it was not being singled out for harsh treatment.

Through the Looking Glass

Hu Xijin commented that “Anglophone” coverage of China tended to describe it as ”an authoritarian, inhuman regime. We are pushing very hard to resolve problems, but you always pick out things such as China is hateful. You mislead the public, and make them feel negative about China.” When the turn came for London bureau chief Li Wenyun of Party mouthpiece the People’s Daily to speak, she pointedly referred to “prejudice against the Chinese Communist Party,” describing how Britons were sometimes “shocked” when she told them who she worked for.

The president of the China Youth Daily Chen Xiaochuan, accused the British media of a “superiority complex.” He said his own daughter had turned down a position at Reuters because of what he called “deep stereotypes.” At the same time, he admitted that Chinese people were often “too sensitive.”

The British side, meanwhile, had complaints of their own. Managing director of Mail Newspapers Guy Zitter voiced horror at the prospect of his newspaper being treated by the Chinese as the “political equivalent of the Guardian or the BBC.”

“My perspective is very different. Don’t lump us together as a single entity,” he said. The BBC’s new China editor Carrie Gracie said the interrogative nature of British reporting was “more down to cultural difference than ideological suspicion.” Chinese friends had asked her why recent questioning of Chinese diplomats appearing on British media had been so fierce. Her response was simple. “Anyone on Today or Newsnight is interrogated and challenged – it’s a style of broadcasting.”

The editor of the bilingual China Dialogue, Isabel Hilton, agreed, pointing out how the previous British prime minster Gordon Brown had been “savaged” by the media: “The press is there to interrogate political power. It’s a mistake to see it as an anti-Chinese phenomenon.”

Access to China was another bone of contention. Carrie Gracie said the BBC wanted while reporting inside China itself was “frustrating; we can never get enough people in to do the story.” Isabel Hilton added that inaccuracies in western reporting of Tibetan unrest in 2008 “were largely down to Chinese reluctance to let reporters in.”

The Times’ diplomatic editor Roger Boyes implored the Chinese side to “open up your country in a way that allows us to present a more rounded picture of you. You need to ask us how to get into our media and become part of the conversation instead of complaining about it.”

For presenter Bai Yansong, CCTV became “a global station” the day after Nelson Mandela died. Like most other international broadcasters, CCTV spent the whole day covering the story – but for CCTV this behaviour was not routine. In 2001 the broadcaster had been slow to report the September 11th attacks in the United States. “To me that was a lesson I feel regretful about.” In 2008, when a huge earthquake struck Sichuan, China offered continuous coverage and media access. China was “progressing,” he said, but its media needed more curiosity and must report what he described as “moving events.”

“We need to talk more about being open,” he added.

Openness was also requested by Isabel Hilton, to explain why the website of ChinaDialogue had been blocked in China since April last year. Its trenchant coverage of environmental issues is widely read inside and outside the country. She attributed a subsequent rise in global readership to the deployment of “Great Firewall-jumping” software by readers in China. “If there is to be openness to dialogue, please allow the Chinese people to read what we do.”

The Chinese media delegation voiced surprise but distanced themselves from any censorship. One Chinese speaker wondered at what point frank criticism might turn into “ill-intended attack.” Another protested that not all Chinese media represented the government. “We criticise the government every day but not necessarily in the way you do. You like to point the finger but we are more subtle.”

If the impact of social media on British life has been substantial, it is even greater in China, where 618 million people are now online, a rise of nearly 10 percent in a single year. Half a billion Chinese access the Internet on mobile devices alone, indulging in celebrity gossip or unmasking corrupt officials.

This occurs despite the censorship and surveillance of the Internet in China, much reported-on in Britain to China’s irritation. At the London forum, blocked western social media sites such as Twitter were dismissed by the Chinese contingent as “an irrelevance.” According to Ma Weigong of China Radio International, China – through applications such as WeChat – was a world leader in social media in its own right.

But the social media discussion included areas of rare agreement between the two sides – notably, that its advent had changed everything. Dai Xiaojing, the president of SEEC Media Group, said there were strong signals that print media were now in decline and that mainstream media needed to innovate. For Mail newspapers, Guy Zitter agreed: the media must “adapt or die.”

Of concern to the British side was the criminalisation in China of those deemed to be “spreading rumours” – a measure that Western media have attributed to the exodus of netizens from (public) Twitter equivalent Weibo to (private, but not immune from censorship) applications like WeChat.

Isabel Hilton said the flight of Bo Xilai’s former police chief Wang Lijun to the US consulate in Chengdu had surfaced as rumour but was in fact true, as was the Bohai Bay oil spill which went unreported by mainstream media for nearly a month. Several of the Chinese representatives denied that this represented rumour, but attributed “frustrating” delays in their coverage to “not being allowed to verify facts.”

Ma Weigong said it was a mistake to think China did not have freedom of speech. “People have a lot of criticisms. With social media, you can’t say the country is entirely controlled by the government.”

With such differing perceptions and backgrounds, how could British and Chinese journalists work more closely together? For the BBC, James Harding said collaboration was needed because of a “transformation” in the way news was gathered. In the era of Snowden and Assange, the people who might expose information had changed. Several speakers suggested journalistic swaps and scholarships between Britain and China.

Closing the meeting, Hu Xijin said the two sides would continue to be critical of each other “because that’s what we do. But we don’t need to make it a clash between countries. No country is as bad as you think, not even North Korea.”

(Vivien Marsh is a former BBC journalist turned doctoral researcher at the Department of Journalism, the University of Westminster)

China Report | by Wan Jiahuan China’s ‘Trump’?
Having long been an iconic figure in China’s media industry, Hu Xijin may not be the most influential newspaper editor in China, but he is no doubt the most controversial. […]
Cover Story | by Yu Xiaodong Global Scope, Local Priorities
In its latest defence white paper, China envisions greater military capability and a global role for the PLA In the past couple of decades, China’s defence policy has been a […]
China Report | by Li Jia and Liu Yutong Private Power
Despite unabated political tension, cultural exchanges between China and Japan have increased in recent months. These ties are expected to help ease diplomatic strain A 3,000-member Japanese delegation of tourism […]
China Report | by Yu Xiaodong An Asian Century?
Amid border disputes and a strategic rivalry, China and India seek to improve economic ties and develop mutual trust “India is ready for business,” Narendra Modi told a group of […]