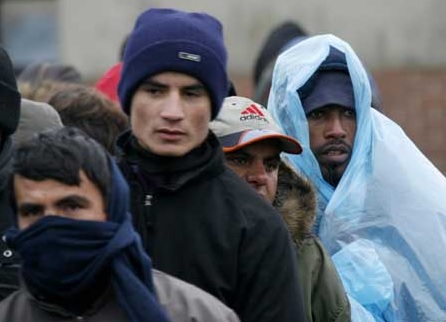 Prime Minister David Cameron has warned that illegal immigrants would be removed from the UK, after migrants in Calais attempted to reach Britain by storming the Channel Tunnel for the third consecutive night. One Sudanese migrant was crushed under a truck on Tuesday while attempting to access the tunnel. Several hundred migrants were turned away from fencing near the Channel Tunnel’s freight terminal on Wednesday night. France has deployed riot police to assist in securing the tunnel, while UK politicians from the Conservatives and UK Independence Party have called for the deployment of British soldiers to the town. Speaking from Vietnam, the Prime Minister said that Britain had invested in fencing and security in Calais. Refugee solidarity groups have criticised the Prime Minister for dehumanising Calais migrants.

Malaysia has urged caution following the discovery of debris that may be from the missing Malaysia Airlines flight MH370. Aircraft debris was found on Wednesday on the island of Réunion, a French territory in the far west of the Indian Ocean. Local media reported the discovery of a badly damaged suitcase on Thursday. The aircraft wreckage, identified as a flaperon, is almost certainly from a Boeing 777, Malaysian authorities have said. To date, flight MH370 is the only Boeing 777 to have disappeared over water. Flight MH370 disappeared en route from Kuala Lumpur to Beijing on 8 March 2014 with 239 people on board. The wreckage is to be sent to France for identification.

Myanmar released 155 Chinese citizens jailed for illegal logging on Thursday, in a move that could ease diplomatic tensions between the two countries. China had made a diplomatic protest over the loggers’ life sentences last week. The 155 Chinese loggers were part of a wider amnesty for 7,000 prisoners in Myanmar. 210 of those released are foreigners, while 13 are reported to be prisoners of conscience. Relations between China and Burma have soured over recent months, as Myanmar wages war with rebel militias in its border region with China. Some Chinese civilians have been killed by stray shells in the region.

Money and politics are the main issues in the headlines today.

The Independent: “Britain reopens the door to dirty money” – anti-corruption campaigners are said to be furious after Business Secretary Sajid Javid said the government was considering relaxing the Bribery Act.

The Daily Telegraph: “End to the pension fee rip-offs” – those who wish to cash in their pension funds should face lower exit fees for doing so, with a new fee cap to be announced by the Prime Minister.

The Times: “Moderate trade union comes out for Corbyn” – Jeremy Corbyn is now “the clear favourite” to win the Labour Party’s leadership contest after securing the backing of Unison, the UK’s second-largest trade union.

The Financial Times: “Fed leaves options open on when to pull rates trigger” – while the US Federal Reserve has said it will raise interest rates this year, it is still yet to indicate when this rate rise will be.

On Ai Weiwei: Ai Weiwei has been denied a six-month business visa by the UK Home Office, and has only been granted a 20-day visa for the UK. The BBC reports that Ai’s visa was denied “because he failed to declare his ‘criminal conviction’”, and while Ai was detained by Chinese authorities in 2011, he “has never been charged or convicted of a crime”. While this may be an “embarrassing bureaucratic blunder”, it means Ai will not be in the UK when China’s President Xi Jinping visits in October, the BBC writes. The Guardian reports that Ai has accused UK authorities of “turning their backs on human rights defenders” with the rejection. The Daily Telegraph notes that Ai’s 20-day visa ensures he can attend his exhibition in London, where an absence would generate “negative headlines”.