By Wang Yan in Paris 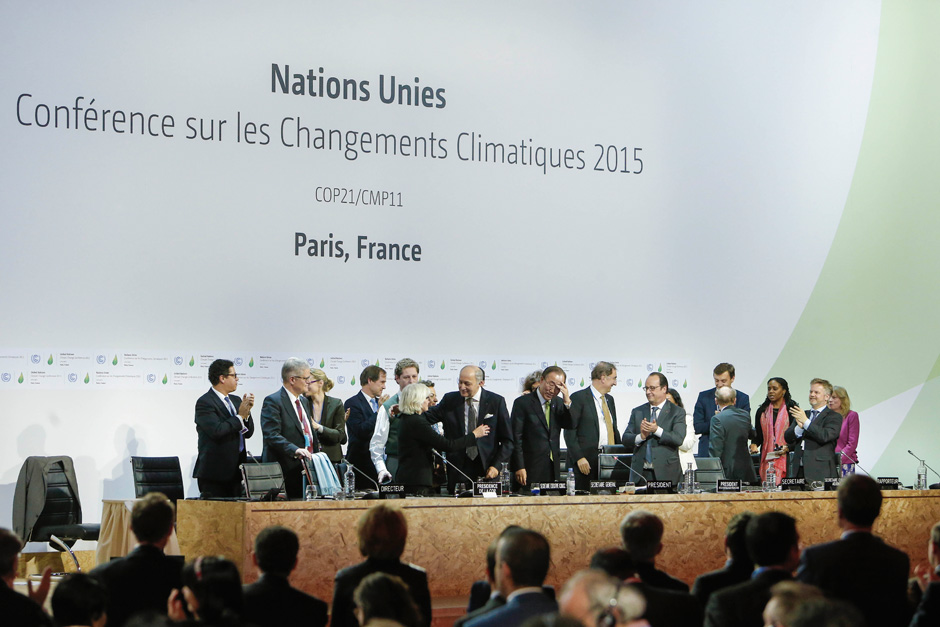 Most of the Chinese delegation would prefer to forget the Copenhagen climate summit in 2009. As the world’s major emerging polluter, China came under intense pressure from other nations, particularly the US, as well as the worldwide media to make firm commitments to reduce emissions and submit to transparent monitoring by independent bodies. While China’s representatives continued to state that, as a developing nation, they could not be expected to implement the emissions reductions programmes being demanded of developed economies, perceived weakness from Beijing quickly saw China labelled in the international media as the major holdout preventing a breakthrough deal.

Six years later, in Paris, Chinese President Xi Jinping made a high-profile speech at the opening ceremony of the 2015 UN Climate Change Conference, stating that his country had invested “years of efforts in domestic mitigation and adaptation to address climate change,” and set out plans for a Chinabacked US$3.1-billion South-South Climate Cooperation Fund (SSCCF) designed to help other developing countries respond to climate change.

In Paris, it seemed, China had learned from the lessons of Copenhagen, and its representatives were at pains to demonstrate willingness to step up as a leading nation in the fight against climate change – not just domestically, but globally.

In the early 1990s, as man-made global warming was emerging as a political issue, China’s greenhouse gas emissions accounted for 3 to 4 percent of the global total, dwarfed by those of industrialised economies. Breakneck growth soon changed this in a single decade, catapulting China to the top of the leaderboard in the early 2000s, and earning it the rank of 67th worldwide in terms of per capita emissions. The eyes of the world were increasingly trained on China, and calls grew for its leaders to play an instrumental role in the global effort to address climate change.

China gradually began to experiment with cleaner energy to wean itself off coal, using government subsidies to lower the manufacturing cost of renewables such as solar panels, and funding R&D in renewable tech. Analysts began to look to China, with its vast manufacturing capacity, as a potential solution to, as well as a major contributor to, global warming.

“China’s conservative attitude in Copenhagen was due to the traditional mindset of being afraid of losing its ‘share of the pie,’” international NGO The Climate Group’s Wu Changhua told ChinaReport during the Paris talks. “Nobody thought the renewable energy [tech sector] would see such massive growth. Now, countries are creating a much bigger ‘pie’ with the green economy, meaning a bigger share for each participant.”

Observers like Wu believe the Chinese leadership is now seeing the potential economic benefits of being a renewable energy tech pioneer. China is creating jobs, cutting pollution and improving energy efficiency and public health at a time of economic slowdown. The country’s most recent actions to tackle its urgent domestic pollution problem are in line with the global climate change agenda outlined in Paris and can contribute to solving an impending global climate crisis, Wu told our reporter.

In just a few years, China has started to make dramatic emissions cuts and play a leading role in the ongoing attempt to avert a global ecological disaster.

Having notched up almost a decade of experience in international negotiations on climate change issues has also enabled China to gradually deepen its scientific understanding of the issue as well as its engagement on a more equal footing with its global peers.

According to Wang Binbin, manager of the Climate Change and Poverty Team of Oxfam Hong Kong, China’s role and significance in global climate negotiations had apparently been enhanced in Paris. “In 2009, the three major forces included the US, the EU and developing countries, but since then China has emerged from [the] developing [camp] as a separate, major force in the game alongside the EU and the US,” said Wang.

“China’s performance at such occasions is [now] eye-catching.”

During the negotiations in the late 1990s and early 2000s that led to the Kyoto Protocol, China’s delegation was dominated by the country’s foreign ministry, due to the central leadership’s viewpoint that climate change was a political and diplomatic issue rather than an environmental or economic one. Since Copenhagen, however, the country’s top macroeconomic planning agency – the National Development and Reform Commission (NDRC) – replaced the foreign ministry as the negotiators’ overseer. As Yang Fuqiang, a senior expert on climate change and energy from the Natural Resources Defence Council told our reporter, China’s consistent refusal to agree to any demands or targets earned it the nickname “Mr. No.” China’s argument, familiar to any observer used to dealing with the country’s Ministry of Foreign Affairs, was that to acquiesce to multilaterally set emissions targets, independent monitoring or any other demands would constitute “a violation of China’s national interests.”

In the run-up to Paris, China’s delegation has learned negotiating skills from its Western counterparts, realising how to compromise and balance the diplomatic situation, including accepting certain conditions formerly dismissed as unacceptable – like outside monitoring and verification (MRV) – as a bargaining chip. In Yang’s opinion, this signifies major progress for China, though he admitted that the country’s delegation still lacks expertise in raising original proposals and offering solutions to climate change. “Most of the time, China remains a follower of schemes or proposals tabled by Western nations,” he said.

“China does not collect the necessary data or conduct sufficient research on global climate change issue. As a major power, China urgently needs to support its think tanks and NGOs in going abroad and carrying out indepth research in related fields.”

Another significant change our reporter observed in the Chinese delegation was negotiators’ relative openness and willingness to communicate with both domestic and international media.

Apart from a number of press briefings convened by the Paris delegation itself, Chinese negotiators also accepted invitations to press briefings held by international organisations such as Earth Journalism Network, a US-based network of environmental journalists. On December 10, during this briefing, Gao Feng, China’s Special Representative for Climate Change Negotiations, answered reporters’ questions with candor.

Clues as to what precipitated China’s change of heart on climate change can be found in the text of the Communist Party’s 12th Five-year Plan (2011-2015). Stated environmental policies laid out in this document have gone from vague, generic goals to discussions of a concrete climate policy framework that factors in specific instruments to drive emissions reductions.

China is now on track to meet or even exceed the numerous climate and energy targets it set for the 12th Five-year Plan (2011- 2015), such as pledges to increase domestic forestation by 21.66 percent, reduce energy intensity by 16 percent, reduce carbon dioxide emissions intensity by 17 percent and increase the proportion of non-fossil fuels in the primary energy mix to 11.4 percent, all targets it vowed to meet by 2015. Open Climate Network estimates that China reduced energy and carbon intensity by 13.4 and 15.5 percent in 2014.

China’s changing reality has enabled the country to agree to meaningful international commitments without these conflicting with national policies. China’s Intended Nationally Determined Contributions (INDC) plan, submitted to the UNFCCC in June 2015, was acknowledged as ambitious and substantial.

Prakash Javadekar, the Indian minister for environment, forests and climate change, told our reporter that his government appreciated China’s “voluntary movement” towards cutting its emissions.

Jon Creyts, managing director at the Rocky Mountain Institute, a US nonprofit research and educational foundation, explained during a telephone interview with ChinaReport that meeting such ambitious INDCs will require China to “significantly improve” its energy efficiency and accrue a massive buildup of renewable energy infrastructure.

“To hit the 20 percent non-fossil fuels [energy use target] by 2030 means roughly about a gigawatt of solar and a gigawatt of wind per week between now and 2030,” said Creyts. “It is a very different development model than… what is already used by developed countries, because China’s emissions would peak at a per capita [average income] level of about US$15,000 per person, less than half the [level of] developed countries.”

In the past two years, bilateral agreements between China and the US on climate change have made progress. Local governments, under pressure from residents sick of pollution and rampant development, have become increasingly bellicose about cementing national climate commitments. For example, the formation of an alliance of 11 high-emissions Chinese cities, including Beijing, Shenzhen, Zhenjiang and Wuhan, led to a pledge that these cities’ emissions will peak well before 2030 or even 2020.

As a tool to facilitate emissions cuts, China’s planned national-level cap-and-trade carbon market, to be launched in 2017, will likely include more than 10,000 enterprises representing six major industrial sectors that use energy levels equivalent to burning 10,000 tons of coal each year. According to Jiang Zhaoli, deputy director general of NDRC’s department of climate change, a unified MRV system will be adopted for this national carbon market that will process some four billion tons of greenhouse gases.

China also appears to be stepping up efforts in its scientific community to address the hotly debated MRV issue. From 2011 to 2015, a total of 800 million yuan (US$123m) was invested in the so-called “Strategic Priority Programme for Verification of Carbon Budget and Related Issues on Addressing Climate Change,” which involved over 2,000 Chinese scientists. Lü Daren, a senior researcher with the Institute of Atmospheric Physics, China Academy of Sciences, explained that the programme’s major tasks include the building of carbon emissions inventories, satellite observation of carbon dioxide clouds, historical emissions research and the establishment of policies enhancing future green and sustainable development. This research is aimed to improve or bypass China’s notoriously unreliable data providers, and standardise testing of the quality of fossil fuels and other related substances.

Lü cited evidence catalogued by his colleagues that suggested Chinese coal is of much lower quality, and thus contains less carbon than that burned by developed economies – a result found by taking thousands of samples from 100 different coal mines across the country, with the findings published in Nature magazine in August 2015, leading some to conclude that China’s CO2 emissions have been overestimated by international agencies over the past decade.

Lü Daren told ChinaReport that his study would continue beyond its official end date in December 2015. At a side event held in Paris on December 11, Li Junfeng, director general of China’s National Centre for Climate Change Strategy and International Cooperation, emphasised that the significance of the five-year scientific programme was to pave the way for future study, and for China accepting international MRV to monitor its emissions.

By making big promises, which appear backed up by significant progress, and also making a major adjustment to policy priorities, China seems determined to ensure that its response to climate change gains momentum in the coming years. But even the most optimistic observers have admitted that it will take more than a change of heart to truly thwart the onward march of global warming.