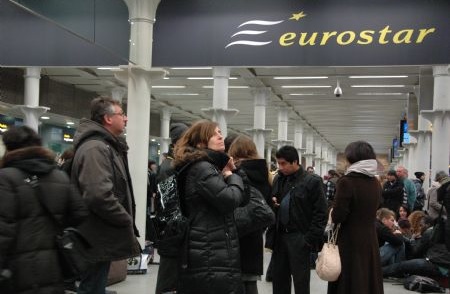 At least one person has been killed after 1,500 migrants tried to enter the Channel Tunnel on Tuesday night. It is understood that the man of Sudanese origin was killed by a freight vehicle leaving a cross-channel ferry. Freight services have been disrupted following the incident, while passenger services face delays. In the UK, parts of the M20 have been closed in Kent to allow parking space for delayed trucks, while Home Secretary Theresa May is to chair a meeting of the government’s Cobra emergency committee to discuss the crisis. The migrant situation in Calais appears to be growing in severity, with migrants now regularly attempting to enter the Channel Tunnel. 2,000 migrants attempted to enter the tunnel on Monday night, while nine migrants have died near the Channel Tunnel terminal since June.

Two convicted terrorists were illegally held in solitary confinement in prison, the UK’s highest court has ruled. Kamel Bourgass and Tanvir Hussain were held in segregation for up to seven months. The five judges considering the case unanimously declared that holding prisoners separately for such a length of time was a breach of prison rules. The Court of Appeal had earlier rejected the two prisoners’ claims. Bourgass is serving a life sentence for murdering a police officer, while Hussain is serving a life sentence for his involvement in a terrorist plot.

China’s stock market bounced back by 3.4 percent on Wednesday, after investors reacted positively to Chinese authorities’ attempts to stabilise the market. Stocks in China’s Shanghai Composite Index fell by 8 percent on Monday, with a further fall on Tuesday. In the wake of the fall, China’s securities regulator announced probes into illegal share ‘dumping’ and pledged to buy stocks. This week’s events mark a return to turbulence after several weeks of calm on the Chinese stock market. In late June and early July, authorities were forced to intervene after a precipitous stock sell-off that wiped up to US$4 trillion off share values.

A broad mix in the headlines today.

The Guardian: “Alarm over risk to patients of overtired GPs” – strained NHS resources are the focus in the Guardian, with the chief of the Royal College of GPs warning that GPs are overloaded with work, raising the risk of “fatal errors”.

The Financial Times: “Death knell for boardoom pensions” – government ministers are considering scrapping pension tax breaks for higher earners, after rumours some executives are already planning to stop saving for their pensions.

The Times: “Thousands of migrants storm Calais terminal” – 148 migrants have reached Britain in the “biggest security breach yet” of the Channel Tunnel, with at least 1,500 migrants trying to enter the tunnel on Tuesday night.

The Daily Telegraph: “EU focus must be single market” – Chancellor George Osborne has said that free trade should be at the centre of renegotiating the UK’s relationship with the EU, rather than political integration.

On Chinese tourists in the UK: The Daily Telegraph reports that “Almost half of Chinese tourists to the UK plan to even more in British shops over the next year”, according to a new survey. “Three quarters of Chinese consumers in the UK have bought at least one luxury item worth more than £500 in the past year”, the paper reports. 46 percent of Chinese visitors said they would spend more on their next visit, while about one third of visitors said they would spend the same amount. When it comes to objects bought by Chinese tourists, the paper reports that “Bags are the most sought-after luxury purchases… followed by clothing, beauty products and technology devices”.