By Zhou Tian and Xie Ying

“Dad, don’t use Arthur, he’s stupid and slow,” exclaimed the 10-year-old daughter of Tian Feng, a researcher of youth issues at the Chinese Academy of Social Sciences.

Tian was surprised that his daughter, a primary school pupil, knew anything about the Arena of Valor, the mobile phone game he was playing. “My classmates are all talking about it,” she told Tian.

A multiplayer online battle arena (MOBA) game similar to the American PC game League of Legends and the Defense of the Ancients, Arena of Valor was developed by Chinese Internet and gaming giant, Tencent.

Five players form a team to fight five others in a fantasy land populated with versions of heroes from Chinese legend and history. Also known as Honour of Kings, it was initially launched in the West as Strike of Kings, later renamed Arena of Valor.

The title has enjoyed soaring popularity nationwide since its launch in 2015. As part of an annual data release by Tencent on April 20, Ma Xiaoyi, Tencent’s senior deputy president, claimed that Arena of Valor had clocked up more than 200 million registered users in China, making it the world’s most popular MOBA game. Yet, according to Jiguang Data, China’s leading big data service provider, 25.7 percent of players were under 19 years old. 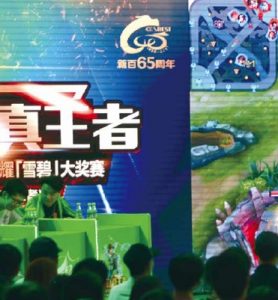 Figures from China’s biggest search Gaming engine Baidu also showed that school children (7-13 years old) made up 7.72 percent of the total number of users who searched for Arena of Valor.

Although these figures did not mean that pupils are the largest user group of the game’s players, they were significant enough to cause concern among teachers and parents. Such worries were amplified after multiple media reports revealed how children were becoming addicted to a dangerous level.

For example, a pupil in Shenzhen was found to have stolen 20,000 yuan (US$3,080) from his parents’ safe to play Arena of Valor, and a 17-year-old boy in Guangzhou was reported to have played the game for 40 hours in a row until he was sent to the ICU of a hospital due to a sudden stroke.

More recently, a 13-year-old boy in Hangzhou, Zhejiang Province, suffered a leg injury after he jumped from a four-storey building to evade his father’s attempts to ban him from playing.

Following a barrage of negative news, Jiang Xiaoxiao, a middle school teacher in Hangzhou, posted an open letter online, attacking Arena of Valor for being “as harmful to children as underground internet cafes were in the past.” The letter was soon echoed by state media including the People’s Daily and Xinhua News Agency and triggered heated debate as to whether or not the game was indeed “electronic heroin” that “poisons” teenagers.

Magic Touch
Following Jiang’s letter, many teachers came forward to complain about the addictive nature of the game. “My students are always talking about the game, so rapturously that I decided to try it, only to find that I nearly got hooked myself,” an anonymous teacher at a public primary school in Hangzhou told the local paper Qianjiang Evening News.

Another teacher at a local private school revealed that although she had forbidden her students from talking about the game in class, they played it immediately after class and some even played it in the middle of the night to prevent detection by their parents.

Born in the 1970s, Tian Feng has been a game player for around 30 years and makes gaming a part of his life. He told our reporter that he did not think Arena of Valor was that appealing at first sight. “As for its design and content, I don’t think that Arena of Valor is any more innovative or interesting than other games,” he said, “but it is indeed easier for players to get addicted.”

“The battles in the game are relatively fair,” he explained. Although users can buy items to strengthen their heroes, it is controlled within a reasonable range. The game unfolds via a system that matches players of similar levels, which enhances its playability and adaptability.

According to Tian, one of the attractions for young players who have little of their own money is that the game can be played extensively without costing too much. This sets it apart from other online games which make large profits by selling in-game add-ons. Arena of Valor makes money by selling “skins,” which only change the heroes’ appearance instead of increasing their skills or strength.

“My classmates are all playing Arena of Valor. If you don’t then you get left out,” Su Xiaoying (pseudonym), a sixth-grade pupil in Tianjin, told China Report. According to Su, nearly all the boys in her class play the game. “At first, only one boy played it, then his two best friends followed, and soon the whole class,” she said. “They even set up a chat group on WeChat [Tencent’s mobile messaging app] to talk about the game,” she added.

Social Contact
Enhancing social contact is another reason Tian believes Arena of Valor is so popular. As a result of developing online chat tools, Tencent links all its games to its messaging tools, enabling users to play with their friends via WeChat or QQ (Tencent’s PC messaging platform) buddy lists, and with the help of GPS technology, Arena of Valor also supports playing with strangers in a user’s neighbourhood.

Thanks to the game, Tian has got back in touch with one of his university classmates who he has not seen for seven years. “If not for the game, we might not have had anything in common to restart the conversation, since we have been in different cities and social circles after graduation,” Tian said.

Tian’s words were echoed by a game designer who goes by the web-name “Teacher Ke.” He told China Report that Tencent benefited greatly from its huge base of QQ and WeChat users, which enables the company to easily have its users “flow” to any of the games it develops or operates.

According to Tian, Arena of Valor is also designed to encourage social interaction within the game. “The game focuses on team battles, and a fixed team is generally easier to win than a team assembled by the game. It encourages players to look for fixed partners. With more and more cooperation, the team members become increasingly acquainted with each other and their friendship will be enhanced offline,” he said.

His words are backed up by media reports which revealed that playing Arena of Valor together has become a major source of entertainment among students and young people. “My classmates talk about Arena of Valor all the time – the heroes, the tactics and the skins to buy…

Then recently, several of my friends in other classes also started to play the game, at the prompting of their classmates, and I found that I couldn’t join in the conversation if I didn’t play it,” Wang Sijing (pseudonym), a sixth-grade pupil in Henan Province, told China Report.

The other sixth-grader, Su Xiaoying, also revealed that a boy in her class had been acknowledged as the “senior player” by buying skins or heroes for other classmates. Very few children have the means to make online payments which makes it hard for them to make in-game purchases. This boy has filled his WeChat and QQ profiles with posts about Arena of Valor. “Playing is a child’s instinct and a part of their social life …

That’s why Arena of Valor spread so quickly among students, just as kungfu novels did in my childhood – if you didn’t read those novels, you would have been viewed as an outsider,” Tian told China Report.

“If current young people talk about Arena of Valor as soon as they meet each other, it means that the game will become an icon of that generation,” he added, saying that he will not stop his daughter if she wants to play it.

Controversies
Tian is in the minority among parents. Wang Sijing’s mother, for example, cannot understand Tian. “I will not allow my daughter to play the game… It is not necessary for us to blindly follow every trend,” she said. “When government departments have few means to control the game at source, I, as a guardian, must help my child distinguish what is good and what is bad,” she said.

State media seemed to stand on the side of Wang’s mother. The People’s Daily, for example, published five commentaries about Arena of Valor, saying that the game has too many negative elements and might “disrupt” people’s lives if not managed effectively.

Xinhua also delivered similar commentaries, saying that recent mass criticism against the Arena of Valor is a “pain point” of the unchecked growth of mobile phone games.

Many people, especially industry insiders, however, indicated it is unfair to blame the game when it gets children addicted. “It is simply a game, just as films, TV series and kungfu novels are… I feel it is wrong I am blamed just because some of the players have become addicted to the game,” Li Min, producer of Arena of Valor, wrote in an open letter following the criticism.

He announced that Tencent will launch a new “anti-addiction system” to control the amount of time children play. “We keep making efforts to produce great games which deliver happiness and love, but it needs time,” he wrote at the end of the letter.

Li’s letter has aroused great sympathy among a great number of players and netizens who argued that “just as some people use a knife to kill, it is not the knife’s fault.”
Liu Xuying, a former senior game designer, was more straightforward.

“I don’t think that a game maker is responsible for educating children. What they are responsible for are the investors and the game’s playability. It is the parents who should take charge of their children’s education,” he said.

His idea faced a counter-attack from opponents. “Accruing as many as 200 million users, Arena of Valor is influential enough to take the responsibility of properly guiding children… I think that is what a good game should do,” Ren Wenqi, a lecturer of the Gansu Institute of Political Science and Law, told China Report.

On July 4, Tencent launched what Li Min had called the anti-addiction system, restricting players below the age of 12 to a maximum of one hour of gameplay per day. However, the so-called “strictest ever system” was allegedly “cracked” the very first day. Media said that many children had easily bypassed the system by using their parents’ ID cards to register or by just buying an ID on the black market.