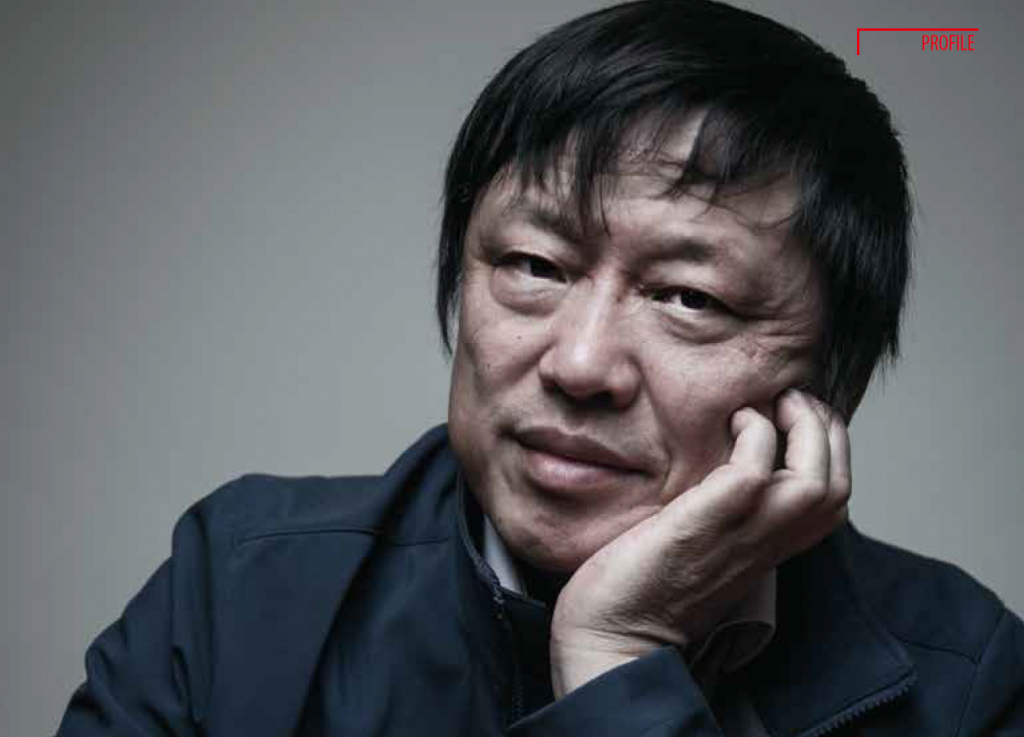 Having long been an iconic figure in China’s media industry, Hu Xijin may not be the most influential newspaper editor in China, but he is no doubt the most controversial.

As editor-in-chief of the State-owned Global Times (GT), widely known for its nationalistic stance, Hu’s reputation as a hawk constantly calling for tougher foreign and defence policies is grounded in his highly personal style of writing.

Unlike his peers at other major Chinese print media outlets, few of whom are actively engaged in actual writing, Hu personally writes the paper’s editorials, using such a provocative style that his work reliably attracts widespread attention from China’s firebrand online commentariat.

In one of his most controversial editorials, for example, Hu argued that the media should be the “watchdog” of China’s “national interests,” which led critics to call him “a government dog,” who would “fetch the Party’s Frisbee no matter how far it has been thrown.” Playing on Hu’s self-proclaimed “patriotism,” the editor has frequently been referred to as “a patriotic rogue” on Weibo, China’s leading microblog platform.

Not only has the GT long been compared to Fox News, but Hu himself was recently likened to Republican presidential candidate Donald Trump, largely due to his aggressive editorial style.

Unlike Trump, though, Hu’s battlefield has been largely confined to print media and China’s blogosphere. But in November, Hu ventured into the realm of visual media – which commands China’s largest audience by far – by launching a personal talk show called Hu Talks on Youku, China’s YouTube equivalent.

With the debut episode attracting over 300,000 views, and the second attracting 500,000, Hu has revealed his new ambition to extend the GT’s influence to the newly emerging market of online TV.

In his interview with ChinaReport, Hu said the criticisms against him and the GT have stemmed from a simplified perspective of political ideology.

“People like to label me with political tags, such as ‘patriotic rogue,’ ‘government dog,’ or ‘leftist,’” Hu told ChinaReport. “They don’t realise that these simple political labels ignore not just the complexity of me as a person, but also the complexity of China as a country.”

Born in 1960, Hu studied Russian literature at the People’s Liberation Army (PLA) Institute of International Relations at Nanjing, an alma mater, Hu claims, which laid the foundations for his “patriotic” values.

Then, in 1986, Hu entered Beijing Foreign Studies University to pursue further graduate study in Russian literature and language. His studies coincided with massive student movements in China, culminating in the Tian’anmen Square Incident of 1989. During this period, Hu said, he was among those who hoped for Western-style democracy in China.

“Like most university students at that time, I also admired the West,” said Hu. He recalled how he and fellow students engaged in heated discussion about the “democratic experience” of the Philippines, and how China could “learn from it.”

But, Hu said, his admiration for Western-style democracy was later dashed during the three-year period between 1993 and 1996 when he served as a correspondent for the Russia and former Yugoslavia offices of the People’s Daily, the official newspaper of the Communist Party of China. Hu told our reporter that he personally witnessed the “painful price people in these countries had to pay” during the collapse of the Soviet Union.

In contrast to the war, conflict and chaos he witnessed in the former Eastern Bloc, Hu said he was surprised and thrilled to see the economic vitality and political stability he found on his return to Beijing in 1996. That year, Hu joined the newly launched GT as deputy editor-in-chief, before landing the top job in 2005.

Hu said these formative experiences crystallised his fundamental political beliefs regarding China’s development. These beliefs, he told ChinaReport, can be summarised thus: “China’s reform cannot be conducted without political stability.” This viewpoint is obviously in accordance with the Party line, and is consequently sharply disputed by his opponents.

As one of the first to adopt an outward-looking focus on international news in a period when China started to open its doors to the outside world, the GT evolved from being a small tabloid to one of the most widely read newspapers in China during the 1990s.

According to Hu, the most important single event that changed the fortune of his paper was the NATO bombing of the Chinese embassy in Belgrade on May 7, 1999. Five US guided missiles hit the embassy, killing three Chinese reporters. The bombing enraged the Chinese public, leading to major protests, and the GT, with established ties in Belgrade thanks to Hu’s previous posting there, was able to offer readers extensive coverage.

Hu said that the paper’s circulation doubled overnight after the incident. Two million people were reading the GT in 2001, 4.5 times the number in 1998.

The late 1990s also saw the rapid polarisation of political ideologies among the Chinese public, as nationalism, democratic liberalism and neo-leftism emerged to become the three dominant schools of political thought in the country.

Such divisions made themselves apparent even in China’s closely regulated media landscape. While liberals were best represented by figures such as Hu Shuli, editor-in-chief of Caijing – now Caixin – magazine, the GT became the flagship publication for nationalists, while neo-leftists rallied behind websites such as Utopia (wyzxwk. com).

Despite the fierce online criticism Hu has encountered, the GT has emerged to become one of the most successful newspapers in China’s recent history. It is estimated that the paper’s circulation in 2014 was about 2.4 million, making it China’s third-most popular newspaper, trailing only behind Reference News, an edited compilation of translations of foreign media reports, and Party mouthpiece People’s Daily, the GT’s mother publication, a subscription to which is mandatory for most Party offices and government officials.

Just as public opinion in China is divided, the GT’s success is also subject to different interpretations. For liberals and democrats, its success is attributable to its tabloid style and populist editorial approach that focusses on promoting and selling nationalism.

For Hu and his supporters, the popularity of the GT is an objective reflection of China’s public opinion. According to Hu, fierce online criticism of him and his publication is an illusory distortion of public opinion. “A minority of people who hold strong political opinions can easily dominate political debate in the public domain,” Hu said. For him, the GT’s success is evidence that the “silent majority” of the Chinese public is on his side.

Besides the GT’s evident nationalist bent, another point of debate regarding the paper’s role concerns its English edition. Launched in 2009, following increased interest in China in the wake of the 2008 Beijing Olympics, the GT’s English edition has become a significant source of quotations for international publications.

While many of the GT English edition articles are taken directly from the Chinese edition, this incarnation, rather than focussing on events abroad, devotes much of its attention to China’s domestic affairs. To the surprise of many, the English version appears to be far more critical of the Chinese government than the Chinese edition, while also presenting a less hawkish perspective on international news.

Not only has the English edition criticised the authorities on a variety of issues, such as extralegal detentions and food safety scandals, it has covered various politically sensitive topics that remain taboo for the Chinese-language print media, including a special report for the 20th anniversary of the Tian’anmen Incident, and unprecedented feature coverage of China’s emerging LGBT community.

To Hu’s critics, the discrepancy between the paper’s Chinese and English versions, tailored to suit the different tastes of Chinese and English-speaking readers, has betrayed the “opportunistic” nature of the GT’s approach to journalism, which many say also underlies Hu’s decision to venture into visual media.

During the debut broadcast of his talk show, Hu rejected this idea, and re-emphasised that his goal is to “reflect the reality” of Chinese society.

Hu did, however, admit that the secret to his and the GT’s success has been taking a “market-oriented” approach. “Our influence in the Chinese media industry relies on [our success in] the market,” said Hu. In 2010, he was quoted as saying that he paid tens of millions of yuan in dividends and a further 53 million (US$8.2m) in taxes.

Being one of the most-read newspapers in China, the GT is also one of the country’s most financially successful news groups. In 2011, as its influence increased, the paper exchanged shares with people.cn, the online arm of People’s Daily, and now holds 14.5 percent of the website’s shares. In 2012, people.cn conducted its IPO, which Hu said brought “tremendous financial benefits” to his paper. By early December, the GT’s share of people.cn alone was valued at US$613 million.

Hu admitted that his recent decision to venture into visual media is also “market-oriented.” “It is very likely that video will become the main battlefield in China’s media landscape,” said Hu, “We need to be ahead of the rest.”

But compared to his iconically provocative style found both in his editorials and his interactions with netizens on Weibo, a noticeable change of style in Hu’s talk show – a much milder tone – has not gone unnoticed. He even uses cartoons to help make points, in an apparent effort to project a more amiable image.

“In the Internet age, when politicians sometimes need to be entertaining, you’ve got to have a sense of humour [to become popular],” Hu told ChinaReport.

However, after attracting 300,000 and 500,000 viewers with his first two episodes, viewer numbers fell back to 100,000 by the time Hu’s third episode aired online. Now, some are questioning if Hu might return to his provocative style in order to boost his ratings in China’s increasingly cutthroat online media environment.

International | by Viv Marsh Building Bridges
It isn’t often that a meeting takes place inside, rather than on, a bridge. But the presence of leading Chinese and UK media figures in the north tower of Tower […]