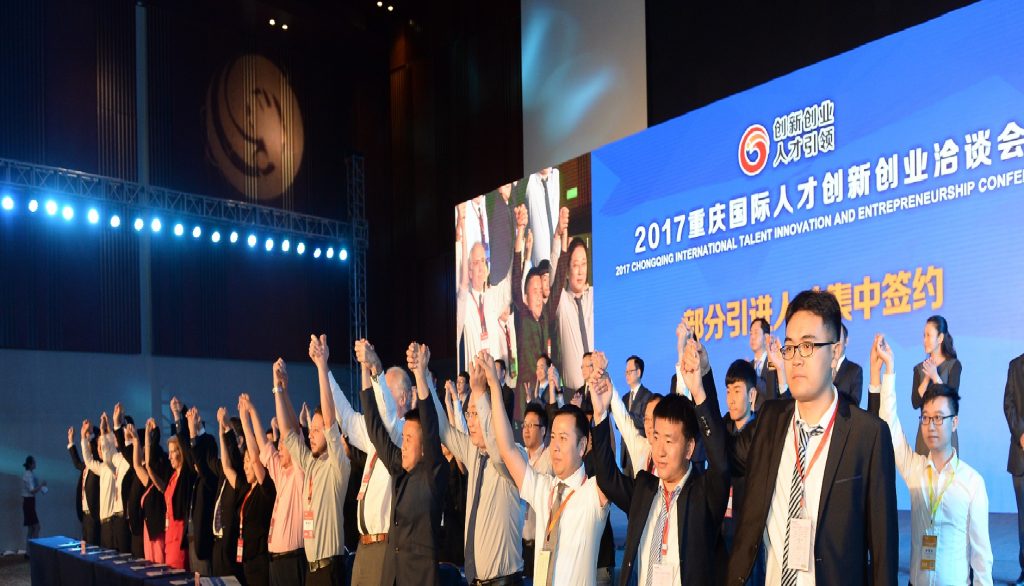 Chongqing has geared up for even faster growth by making an effort to attract international talents. This follows the implementation of a series of favourable policies to lure investments in key sectors such as advanced engineering and finance.

From September 9th to 10th, the 2017 Chongqing International Talent Innovation and Entrepreneurship Conference was held at the Yuelai International Convention Centre in Chongqing.

The two-day event attracted more than a thousand prospective job hunters from home and abroad, as well as 179 employers across Chongqing municipality, offering more than 3,000 job openings, including 1,146 ones that urgently needed to be filled.

The conference saw the signing of 31 projects right there on the spot, as well as the arrival of 20 high-level potential employees from abroad, from the US, Brazil and South Korea among other countries. During the event, 781 job seekers also reached preliminary agreements with 179 prospective employers, including some on the Fortune’s Global 500 companies list.

With the theme of “talent-led innovation and entrepreneurship,” the 2017 event was aimed at attracting outstanding talent and teams and projects, as well as building a well-known brand for Chongqing’s talent courting effort.

Nearly 60 percent of the job seekers were doctorate candidates or above, and 73 percent of them had overseas’ study or research experience, mostly in 24 developed and talent-rich countries and regions, such as the US, Canada, UK and Australia. Their areas of speciality included information technology, biomedicine, manufacturing and new energy.

This year’s conference, the third since its creation in 2015, has added new activities to its portfolio, that is, a communication meeting for invited guests, a symposium for innovation teams and employers, and an exhibition on the improvement of the talent-friendly environment and achievements of the city’s innovation and entrepreneurship endeavours.

This year’s event is, above all, characterised by a variety of activities, with themed lectures, symposiums, as well as exhibitions on Chongqing’s talent-friendly policies, and achievements in the city’s on-going innovation and entrepreneurship effort, said Zhang Yide, director of the Talent Work Section under the CPC of Chongqing Municipal Committee.

Zhang also added that another highlight of this year’s conference is the adoption of multimedia tools to boost its profile both online and offline. The organiser provided news and information of the event on social media. It has also produced feature-length and short videos that have been published in domestic and overseas media outlets.

Competition Intensifies
A key activity of this year’s International Talent Innovation and Entrepreneurship Conference was the final round of the innovation and entrepreneurial competition.

31 projects made their way to the final competition in Chongqing, covering a wide range of industries, such as high-end equipment manufacturing, artificial intelligence, big data and cultural tourism.

Three finalists were selected from 98 projects that took part in the semi-final competitions, held in July and August in six competition zones across the world, namely three overseas ones (Silicon Valley, Cambridge and Singapore) as well as three domestic ones (Beijing, Shanghai and Shenzhen).

Artificial Intelligence (AI) became a widely sought-after category at this year’s competition, with its significantly strong presence in the projects that were submitted, as well as
those which made the way to final stages.

AI has become a battleground of the global tech scene. As a key part of what is dubbed the Third Industrial Revolution, AI has brought hopes for major changes to a wide range of industries. China has already rolled out the blueprint for the development of AI.

With the support of the central government, the AI industry is hoped to dominate the tech world in the years to come. Chongqing has put its weight behind developing its innovation, which has laid a solid foundation for the promotion of AI in the city. Officials believe the conference will help attract AI specialists to Chongqing, propelling the development of the sector.

Another notable trend at this year’s competition was a significant rise in R&D projects centring on new materials and new energy.

Chongqing has put its weight behind fostering these long-term beneficial industries, and the effort has seen preliminary results. In the city’s Liangjiang New Area, for example, the R&D and industry incubation of graphene and silicon materials has already started to bear fruits, which are expected to provide a boost to the local economy. Experts say some of the projects, which involve pollution treatment and R&D on new materials, could potentially help Chongqing strike a balance between development and environmental protection.

Projects that made their way to the final were all selected based on two criteria, namely their representation of state-of-the-art technology, and relatedness to Chongqing’s economic industries, thus making them potential drivers that could propel the city’s future development.

For instance, a project presented at one of the semifinals held in Silicon Valley, with the theme of improving the efficiency and cutting emissions of the diesel fuel injection system, is deemed as a potential boost to Chongqing’s booming auto industry.

At the same time, the competition also came as a promotion of Chongqing’s new developments, as the panel of judges also explained to participants at all competition venues the city’s industry upgrades, valuing of talent and favourable policies for talent and entrepreneurs.

‘Golden Brand’
The Chongqing International Talent Innovation and Entrepreneurship Conference is a key talent recruitment initiative launched by the local government. The previous two sessions, held respectively in 2015 and 2016, attracted a total of 347 talents and 212 projects to take roots in the city, making the event a key platform and a “golden brand” for Chongqing’s effort to attract talent and boost innovation and entrepreneurship.

Drawing on past experiences, this year’s conference focused on connecting talent with projects. The organiser also worked with overseas talent recruitment agencies to raise its profile abroad. Its effort to lure talent from near and far has enjoyed wide recognition from all sides.

By leveraging this talent recruitment platform, Chongqing is taking solid steps in pushing forward its effort to attract talent from around the world. The conference has become a showcase for the city’s global vision, strategic planning and open stance, providing strategic support for its gathering of high-level talent from home and abroad, and creating a core talent base in west China.

Thirst for Talent
With a fast-growing economy, continued improvements in its industrial structure, and the on-going supply-side reform, Chongqing has a high demand for talent.

In 2017, Chongqing introduced an ambitious talent recruitment initiative. Titled the Swan Goose Plan, it seeks to attract between 1,000 to 2,000 skilled workers from home and abroad; some eligible talent recruited through this programme are entitled to a reward up to twice their annual tax contributions.

The city has also formulated a set of measures to attract qualified overseas returnees and provide funding support for their innovation and entrepreneurship projects.

Apart from the effort to attract talent from elsewhere, the city is also actively looking to foster local talent. Chongqing Craftsmen 2020 is another major talent endeavour in the city.

Through this programme, the local government pledges to improve the innovation mechanism and build a talent-friendly environment, foster high-end talent and provide policy incentives to highly-skilled workers to better serve the city’s key economic fields, such as its pillar industries, strategic emerging industries, services industries and agricultural industries.

As part of the talent plan, Chongqing will foster 2,000 local craftsmen with a global vision and global competitiveness, based on the city’s multi-channel and multi-level international
cooperation on key strategies and projects, such as the Belt and Road initiative and the China-Singapore (Chongqing) Demonstration Initiative on Strategic Connectivity.

In the meantime, the brain gain scheme also seeks to attract 500 high-level skilled talent as well as 5,000 urgently-needed skilled talent from abroad.

Officials say the talent roadmap marks a number of shifts in the government’s talent recruitment effort: companies have now replaced universities and research institutions to become the main recruiters for talent, and market recognition is a more important criterion for talent, who used to be judged based on their educational credentials and professional titles.

Another major change is that the plan shows a preference for urgently-needed R&D specialists, instead of experts, lecturers and company executives, who used to be more valued in past talent recruitment initiatives.

At the same time, the plan also has a higher level of coordination among Chongqing’s districts and counties, reflecting their various positionings based on the idea of reaching common and differentiated development across the city.

New Attraction
Chongqing’s effort to attract talent came amid the escalating war for talent among China’s second- and third-tier cities, against rivals such as Xi’an, Wuhan and Chengdu which are rolling out competitive packages for highly-skilled and experienced professionals, who normally prefer to stay in the country’s more resource-rich first tier-cities, such as Beijing, Shanghai and Shenzhen, despite the skyrocketing house prices and long daily commutes.

Nevertheless, Chongqing has become a preferred destination for talent: the city has seen impressive economic development in recent years and has been the quarterly leader multiple
times among other provincial regions in terms of GDP growth. A rising economy, a comprehensive range of industries, and the robust support from the local government have guaranteed development opportunities for businesses and individuals alike.

Apart from all this, Chongqing is a dynamic city with a range of unique attractions: a mild climate, a rich culture and beautiful landscape, as well as a mouth-watering local cuisine, with the hot pot as the most widely known and enjoyed the food.

According to official data, Chongqing’s GDP grew 10.5 percent from a year ago in the first half of this year, with newly-added jobs totalling around 422,000. Its industrial profit rose 23.3 percent on an annual basis during the same period. In the meantime, the city has been a leader in terms of GDP growth among the country’s provincial regions for ten consecutive quarters.

Towards the end of 2016, Chongqing mapped out a blueprint, which identified a range of emerging industries that will be the focal areas of development for the city in the future, including a range of emerging industries, such as core electronic parts, the Internet of Things, smart devices, new materials, high-end transport equipment, new energy vehicles, biomedicine and green equipment.

Demand for skilled workers will continue to soar in Chongqing, as the city’s economy roars ahead. According to the guidelines compiled by the local government, by 2025, Chongqing is estimated to be in need of around 250,000 highly-skilled workers, including 60,000 R&D specialists, 80,000 technicians and 110,000 skilled workers.