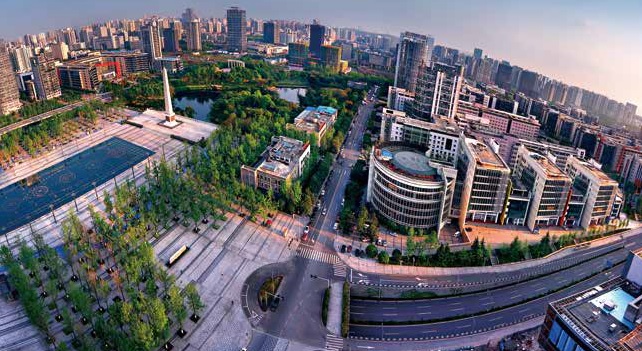 The newly announced pro-business policies, which are now in force, are believed to be the most favourable issued by the New Area since it was established in 2010. “We hope these four policies will have an aggregation effect, and draw in a wave of businesses and investors”, said Tang Zongwei, deputy director of the Liangjiang New Area Administrative Committee.

Along with efforts to foster a positive policy environment, the Liangjiang New Area is also picking up speed in improving city functions and facilities, while responding to the central government’s calls to streamline administration, balance regulation, and improve services, in a bid to create a top-notch business environment more attractive to companies and investors.

Reasonable Choice
Since its creation seven years ago, the Liangjiang New Area has completed its first phase of construction, aggregating the modern manufacturing industry and the modern services industry, and forming a sound, structured industry framework in the development zone.

The Liangjiang New Area’s economic output totalled 226.1 billion yuan last year, a 10.9 percent increase on the year before. By the end of 2016, it had secured 3,300 investment deals, with contractual investments nearing 1.2 trillion yuan (around US$179 billion), including US$25 billion from overseas investors.

At the same time, the auto industry, electronic information, and equipment manufacturing, the New Area’s three major economic pillars, continue to roar ahead at a rapid speed. These industries now account for 92.1% of the New Area’s total industrial output.

Chen Lüping, vice mayor of the Chongqing Municipality and head of the Liangjiang New Area Administrative Committee, called businesses and investment solicitation the “fundamental path” for the New Area’s development, citing the example of China’s southern coastal Guangdong province, which has thrived on export processing and compensation trade.

“All the less developed areas are hoping to soar through business and investment solicitation. Even now, this is still a priority for developed areas, such as Guangzhou, Shenzhen, Pudong, and Binhai,” Chen added.

In addition to rolling out favourable policies and building clarified and well-structured investor-friendly policy mechanisms, Liangjiang seeks to integrate all the available human resources by creating incentives and exploring innovative methods of business and investment solicitation.

The New Area has set up a special task force to lead and coordinate ongoing efforts to lure businesses and investors. The Liangjiang New Area is also actively formulating pro-business incentives while exploring policy innovation in business and investment solicitation.

Connectivity Edge
The pro-business policies come at a time when the Liangjiang New Area faces increasing global competition: since the global financial crisis, the developed world, notably the U.S. and France, have become increasingly aware of the importance of the role of competitive local manufacturing industries in job creation, and have therefore developed their own favourable policies to encourage the re-shoring of their manufacturing sectors.

On the other side of the global outsourcing chain, Southeast Asian countries have caught the attention of multi-national companies thanks to their lower labour costs. But compared with global competitors, the new Liangjiang district enjoys multiple unique advantages.

Transportation network, labour costs, and the financial environment are believed to be at the core of a region’s attractiveness to businesses and investors, and the Liangjiang New Area ticks all the boxes.

As the hub and core area connecting the Belt and Road regions with the Yangtze River Economic Belt, the Liangjiang New Area boasts a well-functioning multi-facet transportation network, incorporating airways, waterways and railways.

As a key node on this transportation network, Chongqing Jiangbei International Airport saw an annual throughput of 35.9 million people in 2016 – more than half the population of Great Britain.

The figure made the airport the ninth biggest airport in China on this measure, and one of the busiest airports in the world. With its new terminal area and a third runway in operation, it will be able to serve 45 million passengers and handle 1.1 million tons of cargo and mail annually.

Financial Muscle
Finance has been described as the blood of the real economy, and both rely on each other. The Liangjiang New Area has actively developed its financial sector, which has in turn provided strong support for local industry.

The Liangjiang New Area has led efforts by creating a 20 billion yuan equity investment fund focusing on strategic emerging industries in 2015. It has also brought in funds from Chongqing totalling 80 billion yuan, in efforts to boost the mutually reliant and beneficial relationship between the finance sector and the real economy, injecting fresh momentum to its pillar industries: auto, electronic information, and advanced equipment.

The Liangjiang New Area has partnered with Internet and retail giants such as JD, Alibaba, Baidu and Suning, in their attempts to explore online micro-lending, and their businesses have grown rapidly.

Talent Pool
Compared with previous business policies, the new golden terms have focused on addressing the pain points of industries’ development and business concerns. The new measures are carefully calculated around local conditions to ensure they are implemented smoothly.

Talent introduction is a top priority. Apart from promising heavy subsidies for key projects, the four sets of policies have also focused on inviting talent and creating an innovation ecosystem. High-end talent will be entitled to a five-year special reward. At the same time, people recruited under the scheme will be considered for rewards based on a number of factors, such as equity returns and team performance.

In an ambitious talent introduction plan mapped out in 2016, the Liangjiang New Area set the goals for the 13th Five Year Plan, that is, inviting 20 top-notch talents from home and abroad, 20 leading domestic innovation and start-up teams, around 10 advanced R&D institutions focusing on strategic emerging industries, with the New Area’s talent base reaching 1 million.

Differentiation Strategy
In addition to highlighting the New Area’s focus on improving its industrial structure, the newly released policies have also raised the thresholds for project support. Officials say the move is intended to avoid homogenous competition with other districts of Chongqing, which will contribute to differentiated development models and common prosperity across the region.

Investor Magnet
The Liangjiang New Area has been in the spotlight since its creation: as China’s first inland national-level new area, Liangjiang is endowed with the mission of building a key base for advanced manufacturing and modern services and serving as a gateway to China’s vast inland region.

The New Area’s effort to build a preferred destination for global investment has seen fruitful results: In 2016, the Liangjiang New Area had received overseas investment from 21 countries and regions. During the same period, the region’s actual utilisation of foreign investment topped US$3.2 billion, near a fifth of Chongqing’s total.

The U.S. is a major source of investors. The New Area is home to more than 30 US companies, many of which focus on auto, electronic information, biomedicine, business information services, and advanced manufacturing.

Liangjiang is also looking to forge close ties with Germany. Chongqing is one of China’s oldest industrial bases, with decades of experience in machinery manufacturing. As the city upgrades its economy, its industry structure could supplement the German manufacturing sector.

For German companies eyeing expansion in inland China, Chongqing is also an ideal place to set up operations, with its geographical location, talent pool, and other resources to help German companies quickly leverage their advanced technologies in the local market. More than 40 German companies have invested in Liangjiang New Area.

Singapore is another country that has increased its footprint in Liangjiang. With the signing of the China-Singapore (Chongqing) Demonstration Initiative on Strategic Connectivity in November 2015, the third government-to-government cooperation project between the two countries, Chongqing, the operation site of the initiative, has seen increasing ties with the Southeast Asian city-state, whose technology and management expertise could provide valuable experience for Chongqing’s development.

With the gradual implementation of the connectivity initiative, quite a few Singaporean companies and China-Singaporean joint ventures have set up operations in Liangjiang.
Chongqing-based businesses are also taking advantage of the offshore centre in financial cooperation and innovation, in a bid to broaden investment channels and cut financing costs.

Yet analysts say there’s still untapped potential for cooperation between Chongqing and Singapore. Amid the growing recognition of the Belt and Road strategy and the ongoing construction of pilot free trade areas, Chongqing’s finance, aviation, logistics, and telecoms industries are embracing fresh opportunities, and these areas are the focal points of the China-Singapore Connectivity Project.

Industry insiders say Chongqing and Singapore share many similarities in industrial structure and regional location, which are set to lay a solid foundation for future cooperation.