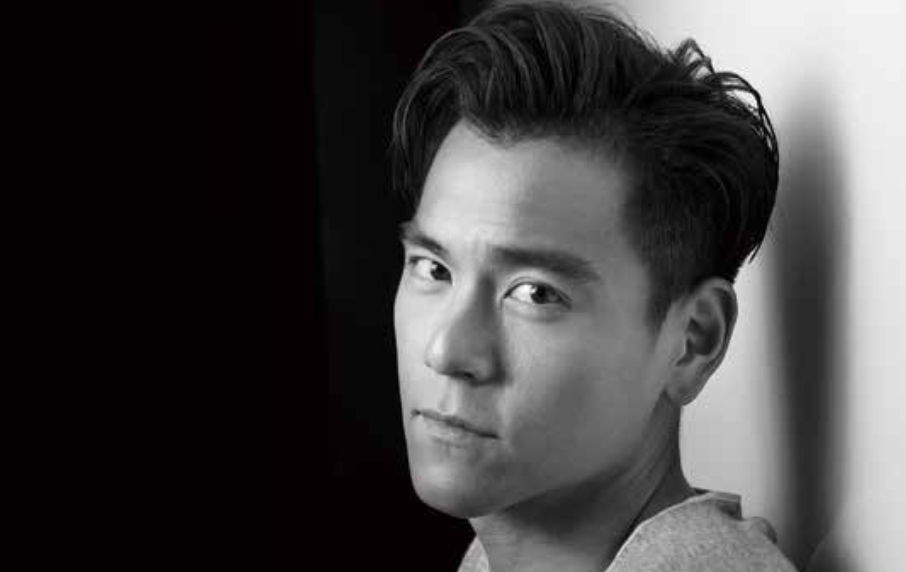 Eddie Peng Yu-yen was fifteen minutes early for the interview.

He was wearing a light-grey T-shirt and black jeans, showing off a recently acquired tan for his role as “Blackie Lau,” a guerilla outlaw in the recently released war film Our Time Will Come.

Another film, Wukong, also premiered this July, in which he played the rebellious Monkey King Sun Wukong, the subject of dozens of Chinese films.

His perfect physique with clean-cut looks, beautiful athletic body, and his signature pecs and abs has made him one of the biggest eye-poppers in the Chinese film industry.

The media prefers to call him xiao xianrou, which literally translates as “little fresh meat,” a term that evokes a desirable young man, fearless, successful, and, most importantly, enviably good-looking.

For years, Peng has worked hard to shed the “little fresh meat,” “sexy icon,” and “boy-next-door” persona and stunned both industry players and audiences with his impressive work ethic as an actor who always goes to extremes to hone the skills required for each role.

The 35-year-old has taken 15 years to grow from a fledgeling face to a mature actor and starred in a wide variety of hits along the way.

“I would never have imagined that Ann Hui would invite me to be in her film. This is a great honour for me,” Peng told China Report about his latest production Our Time Will Come, a wartime film based on a true story, directed by the award-winning Hong Kong director Ann Hui, which focuses on the resistance movement in Japanese-occupied Hong Kong during WW2.

Released on July 1 on the Chinese mainland, the film was branded as a “celebratory gift” for the 20th anniversary of the Hong Kong handover.

This is the first time that Peng cooperated with Hui, 70, the pioneer of the Hong Kong New Wave film movement and one of the most celebrated directors in Hong Kong film history along with contemporaries such as Wong Kar-wai and Tsui Hark.

Hui has produced a varied body of work that tackles social issues in Hong Kong and the rest of Asia with humanity and subtlety.

Peng played Blackie Lau, a legendary assassin in the local resistance group who took part in a mission to evacuate a group of intellectuals from Hong Kong in 1942. Peng’s eyes sparkled with excitement when talking about the role.

“Playing this role was particularly challenging for me. I don’t look like a guerilla fighter and can’t speak Cantonese at all.

I couldn’t get the hang of it to start,” Peng said. To prepare for the role, Peng consumed three biographies of Blackie Lau to get a clearer image of the outlaw hero.

To get closer to the historical guru of Lau, Peng paid particular attention to the smallest details.

He insisted on a natural suntan to darken his skin, instead of just using makeup, and crafted fake muddy fingernails and crooked teeth to be more convincing as the legendary guru.

Filming Our Time Will Come, for Peng, was a precious lesson in acting. “I am the type who tends to think a lot when acting, but sometimes thinking too much might restrain a performance.

The director [Ann Hui] often told me that ‘You can try another way around. It might be better if you think less, relax a bit more and let go of yourself,’” Peng told China Report. e actor said that the biggest lesson he learnt from working with Hui is that acting can be a relaxing process.

Compared to Blackie, playing Sun Wu-kong, the most famous Chinese mythological hero, brought the actor many more stresses and challenges.

Directed by Hong Kong director Derek Kwok, Wukong is an action-fantasy that tells the stories of the mythological monkey Sun Wukong before he became the Monkey King.

“He [Eddie Peng] is cool and dashing, and there is also a touch of monkey-like cunning in his looks.

Since the film Wukong focuses on the earlier stories of Sun Wukong before he grows into the invincible Monkey King, this protagonist must display a mixed personality as an adorable, unruly, obstinate but vulnerable character.

Eddie was the first actor that came to mind whom I believed perfectly matched the role,” Kwok told China Report.

“Balancing Sun Wukong’s monkey nature and his human nature is a subtle art,” Kwok said. “We want to portray him like a human, but remind our audiences of the fact he is still a monkey.”

Peng said the biggest challenge by far was to this interpretation of the role to that in people’s heads.

“Everyone has his or her own Sun Wukong in mind,” said Peng. “He is very powerful, rebellious and harbours a desire for freedom.”

Three years ago, when Peng was invited to play Sun Wukong, his friends tried to persuade him that playing such an iconic role would mean setting up expectations that were hard to meet.

He encountered similar objections when he chose to play the iconic martial artist Wong Fei-hung in Rise of the Legend (2014) and a competitive cyclist in the sports film To the Fore (2015).

Peng described himself as “centred on himself” when it comes to filming. “Honestly, I don’t really care much about whether other people think it is worthy or not.

What’s important is what I can learn from it. It’s pretty subjective,” Peng told China Report.

No Desire, No Fear
Born in Taipei on March 24, 1982, Peng grew up in a single-parent family and was brought up by his grandmother, who was an ardent cinemagoer and one of the most influential persons in his life.

Peng spent his childhood in the cinema with his grandmother and became intoxicated with the world he saw on screen.

The dashing Hong Kong actor Chou Yun-fat was his grandmother’s favourite, but back then Peng could never have imagined that he would co-star with Chou, famous for his cool gangster roles, in Cold War II (2016).

At the age of 13, his family moved to Vancouver, where he later attended the University of British Columbia, majoring in economics, as his family had hoped.

He described the route he followed at that time as “Asian stereotype” – a math-savvy Asian studying business in a Western university, a rather safe road that he hardly felt any passion for.

Peng’s fate took a sharp turn at the age of 19 when his beloved grandmother died in the summer of his first university year.

He returned to Taiwan to arrange the funeral, during which time TV director Yang Daqing invited him to act in the drama, e White Paper of Love (2002).

Peng said it was filming his second television series, Scent of Love in 2003, that propelled him to seriously consider taking acting as his career. The decision was inspired in part by his granny’s love of cinema.

He finally decided to drop out of school and startup acting, a ballsy choice given that the Chinese entertainment industry was far from booming at that time.

When filming Scent of Love, Peng was lucky enough to cooperate with Taiwanese veteran actor Lau Chung-yan, who played his father in the series.

As a serious professional, Lau served as Peng’s mentor and held acting classes for him, teaching him useful techniques, different postures and how to work with different emotions.

“When we ate together, he would talk to me about the script and help me study it so I could have a solid foundation in acting,” Peng said.

His journey to stardom did not go smoothly. As an actor, Peng remained nameless for almost a decade. From 2001 to 2011, he acted in more than 20 films and TV dramas but none of them became a hit. At 26 he was broke, in debt and short of options.

The film tells the story of young gymnast Ashin, who is forced to give up his beloved sport under family pressures and goes astray in a violent street world. But after hitting rock bottom, Ashin returns to gymnastics and finally becomes a champion.

Peng dedicated all his time and energy to the role. He spent 12 hours a day for eight consecutive months training in the gym to perfect jumps and flips and acquired all the required movements for the sport.

Peng solidified himself as a household name after his starring in the film Unbeatable, in which he played a young man who wishes to learn Mixed Martial Arts (MMA).

The acclaimed film was the highest grossing local production in Hong Kong that year.

His realistic portrayal of an MMA fighter earned him nominations as Best Supporting Actor at the 33rd Hong Kong Film Award and 50th Golden Horse Film Festival and Awards.

During the lowest point of his career, his mother said to him, “When one has no desire, one has no fear.”

He did not get it at that time, but years later he came to firmly believe this.

“I am not a very ambitious person with a lot of goals to pursue. I just want to be in the moment, and enjoy and appreciate what I have now.

When you have a great desire for something, it also comes with the great fear of losing it. Forget the future and give your best in accomplishing things in the present, it will naturally lead you to the places that you want to be,” Peng said.

Stay Hungry, Stay Foolish
“Jump! Jump! Stay hungry, stay foolish,” Peng put the motto on the homepage of his own website to motivate himself.

The two actors Peng admires most are Robert De Niro and Christian Bale, especially how much they are prepared to change for their roles.

Despite his lack of professional training in theatre schools, he has amazed his collaborators and audiences by how far he is willing to transform himself for each role.

“If I hadn’t turned myself into a real gymnast [in Jump Ashin!], nobody would have found me convincing,” Peng said.

Apart from training as a gymnast, over 15 years, Peng has trained as a professional dolphin instructor for When Dolphin Met Cat, a competent sign language user for Hear Me (2009), a boxer specialising in MMA, Muay Thai and Brazilian Jiu-Jitsu for Unbeatable (2013), a kung-fu practitioner for Rise of the Legend (2014), a qualified cyclist for To the Fore (2015), and a Thai and Burmese speaker and rearms expert for Operation Mekong (2016).

Many of these skills took him months or even a year to acquire, practising every day.

“I don’t have many talents. But at least I can challenge myself to the extreme. If someone can do 100 percent, then I can do 120 percent,” Peng said humbly to Beijing Times.

Peng sticks to one principle when evaluating his performance in previous productions: “Did I enjoy the filming? Have I learned something new?” His greatest fear as an actor is boredom.

He says he’s afraid that one day he’ll lose his interest in acting – and thus in life – and so he’s always pushing himself to find something new.

“When performing, I cannot stand myself just playing someone without giving myself to it. If I don’t put myself into the character, see as he sees and feel as he feels, my acting might appear as hollow as a puppet,” Peng told our reporter.

“If I enter a story, a sense of fear seizes me and completely drowns me in the story and cannot let go.

I put all my energy into the role. When the filming is over and I come back to normal life, a faint feeling of fear still remains until I enter into the next role,” Peng told China Report.

In recent years, Peng has been given more and more opportunities to try different roles. He is always drawn to socially marginal characters and stories that push him beyond his own boundaries.

For him, the most exciting thing about acting is to allow him to ceaselessly explore things unknown.

“There’s a lot of things I don’t understand. I always look forward to discovering more about this world,” Peng added.