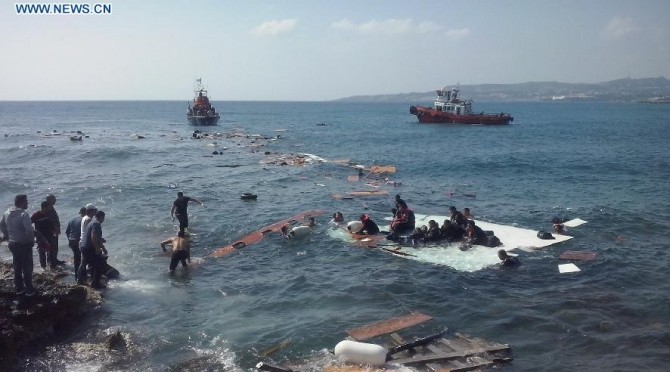 Tens of thousands of migrants caught crossing the Mediterranean Sea into Europe will be redistributed across the EU, European leaders have decided. 40,000 migrants will be resettled across Europe over the next two years, though countries will not face mandatory resettlement quotas. Details of where migrants will be resettled have yet to be decided, though the UK has opted out of the agreement, while Bulgaria and Hungary will also be exempt from resettling migrants. The agreement, reached in late-night talks, comes during a summit of EU leaders in Brussels where the Mediterranean migrant crisis featured high on the agenda. Italy has pushed for European nations to do more to deal with high numbers of Mediterranean migrants, with both Italy and Greece each receiving over 60,000 migrants by sea so far in 2015. Many migrants are fleeing conflicts in Africa and the Middle East, including the Syrian civil war. The resettlement scheme will be finalised by the end of July.

Prime Minister David Cameron has spoken of his happiness on beginning reform negotiations for Britain’s relationship with the EU, while observers have expressed concerns that changes to EU treaties may not be made before a UK referendum on EU membership. Speaking in Brussels after addressing EU leaders on the issue, the Prime Minister said the reform process was “under way”. The Prime Minister has faced consistent calls from Conservative backbench MPs for Britain to leave or reform its membership of the EU. Officials have acknowledged that there is no guarantee that all 27 EU member states will have ratified the UK’s proposed EU treaty reforms by the time of the referendum. Instead, the Prime Minister hopes to receive legally binding guarantees from member states by the time of the referendum. Among the Prime Minister’s demands are cuts to benefits for migrants, an opt-out from the EU’s commitment to ‘ever closer union’, and the improved ability to block legislation imposed by Brussels.

China has begun drilling with a controversial oil rig in the waters between China and Vietnam, in a move that could further raise tensions in the South China Sea. The rig is now 75 miles from China’s Hainan island, and 104 miles from the Vietnamese coast, in an area of territorial overlap. The oil rig was at the heart of a fierce dispute between China and Vietnam in 2014, drilling near one of the disputed Paracel Islands 120 miles from Vietnam and 180 miles from China, an area viewed by both countries as their own territorial waters. The news comes just weeks ahead of a landmark visit to the US by Vietnamese Leader Nguyen Phu Trong. Some military progress has been made between China and Japan, meanwhile, with the two countries set to agree protocol on unexpected military encounters in July. The agreement should reduce the risk of confrontation between the two countries.

Money continues to make the headlines today. The Guardian leads with news that following spiralling costs, “Rail upgrades promised” by the Conservative government are to be “shelved”. The paper writes that with many of the shelved rail projects north of London, their postponement puts the government’s ‘Northern powerhouse’ plans at risk. The Times calls the news the “£2bn fiasco of Britain’s broken rail network”, with passengers facing “years of delays to improvements”. The government has blamed Network Rail for the problems, with the company’s chairman replaced in the wake of the scandal. The Independent leads with news that UK lawyers are “set to strike in protest at ‘devastating’ legal aid cuts”. Britain’s courts could “grind to a halt” in July as lawyers boycott legal aid cases in protest over new legal aid pay rates introduced on 1 July. The Financial Times leads with news that Greece has been handed an “ultimatum” by its creditors, as the EU prepares a ‘plan B’ for the Greek debt crisis. According to the paper, Brussels is “poised to ringfence Greece”, with Saturday Greece’s last chance to strike a bailout deal. The Daily Telegraph leads with news that broadcasting regulator Ofcom will “take charge of the BBC”. Under potential new government plans, the BBC Trust could be “axed”, with Ofcom getting a “beefed-up role to rule on impartiality and value for money”.

On China’s international relations: China presence and relations on the international stage has received coverage from some UK media outlets. The BBC reports on an accusation from US intelligence chief James Clapper that China is the “lead suspect” in a cyber attack that obtained information on millions of US government employees. The Daily Telegraph reports that the hackers got access to the “intimate secrets of workers” with the attack. An opinion piece in the paper writes that Chinese hacking of British firms has begun “a new Cold War”. The Guardian features an agency piece reporting on China’s attack on America’s human rights record, while a separate opinion piece for the paper asks if China’s rise is “truly the stuff of nightmares”. Highlighting Africa’s “positive view” of China, the piece concludes that it is “too early to say” what China’s rise means for the world.