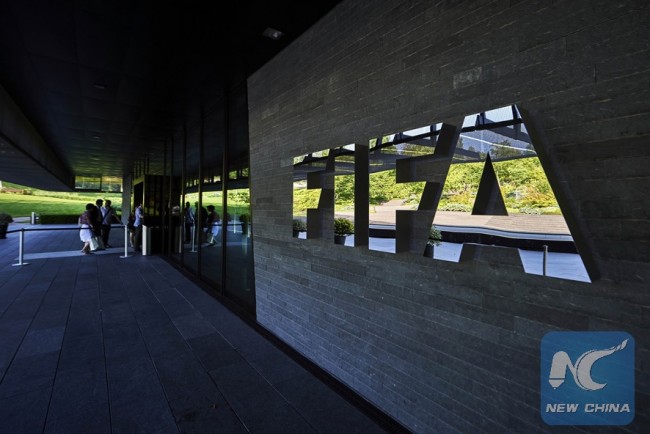 Swiss authorities are investigating 53 cases of possible money laundering at world football body FIFA, Swiss attorney general Michael Lauber has said. Both the United States and Switzerland are carrying out investigations into corruption allegations at FIFA, following the arrest of seven FIFA officials at a hotel in Zurich in May. Lauber has said that his office is analysing huge amounts of FIFA data – nine terabytes’ worth – seized in the wake of the arrests. Lauber urged patience at a press conference, where he said Swiss authorities were looking at 53 banking relationships reported by the country’s financial intelligence unit, as well as 104 incidents of suspicious activity in Swiss bank accounts. Lauber did not rule out the possibility of an interview with FIFA President Sepp Blatter as part of investigations. FIFA’s head of audit and compliance, Domenico Scala, has said that the discovery of any corruption related to the 2018 or 2022 World Cup bids could force a revote to find new host countries.

A submariner who raised concerns over the security of Britain’s Trident nuclear deterrent has left the Royal Navy. Writing online, whistleblower Able Seaman William McNeilly stated that he had been dishonourably discharged from the Royal Navy but that all charges against him had been dropped. McNeilly had claimed that Britain’s Trident missile programme in Scotland was a “disaster waiting to happen”. Investigations into McNeilly and his claims by UK authorities prompted McNeilly to go into hiding abroad before handing himself in to authorities in May. In his online post, McNeilly reiterated that he had acted in the interest of national security, and that he had been discharged from the Navy to protect its public image. McNeilly went on to criticise the Navy’s downplaying of his allegations. The Royal Navy described McNeilly’s criticisms of Trident as “subjective and unsubstantiated”, adding that his allegations were factually incorrect and the result of misunderstanding and partial understanding.

Hong Kong lawmakers are debating democratic reforms for the territory ahead of a vote on a reform blueprint later this week. The reform package will give Hong Kong citizens the right to vote for their territory’s Chief Executive for the first time in 2017. The proposed reforms have caused anger and protest among some politicians and members of the public, however, who argue that a decision to pre-screen candidates for elections would not mean true democracy. In late 2014, thousands of Hong Kong citizens took part in pro-democracy protests calling for deeper democratic reforms. Security around Hong Kong’s government buildings has been stepped up this week, with some smaller protests already reported. A bomb plot has recently been foiled in the city, but it is not known if this is in any way linked to the protests. Speaking at the debate, Hong Kong Chief Secretary Carrie Lam warned against voting against the reform package, saying that re-launching reforms following a failed vote would be difficult.

Greece’s looming debt default makes a few headlines again today. The Financial Times leads with news that Greece’s creditors are making “emergency plans as Greek defiance spurs bond turmoil”. Greek Prime Minister Alexis Tsipras has refused to make the reforms demanded by international creditors, saying they would bring the “humiliation” of Greece. The Guardian writes in its headline that Greece has accused its creditors of “criminal” irresponsibility as a “default nears”, with Tsipras saying that the actions of the International Monetary Fund have intensified the crisis. The Times leads with news that savers are rushing to “cash in pensions for £1bn spree”, following rules allowing Britons to withdraw cash from their pension funds early. “Cars, homes and holidays” have been the main purchases of those withdrawing money. The Independent leads with a plea from the husbands of three sisters believed to have fled to Syria with their children, asking the sisters to “Please, please come home”. The “Distraught” husbands of the Dawood sisters have had no contact with their families for a week. The Daily Telegraph leads with a warning to women not to “delay motherhood past 35”, after the publishing of a new study finding that “fertility drops radically soon after, and almost disappears at 44”. Researchers suggest starting a family earlier or freezing eggs.

On Hong Kong’s political reforms: the approaching vote on democratic reforms in Hong Kong has received some coverage from UK media, with the BBC giving the story the most attention. The BBC features a fact file on the debate for democracy, as well as an analysis piece on the reported Hong Kong bomb plot. The piece asks if the territory’s ‘occupy’ movement has gone “sour” ahead of the crucial vote. The Guardian features an analysis piece asking what the reforms could mean for Hong Kong. Pro-democracy lawmakers’ blocking of the package “would represent a major triumph for Hong Kong’s notoriously division-prone democracy movement”, the paper writes.