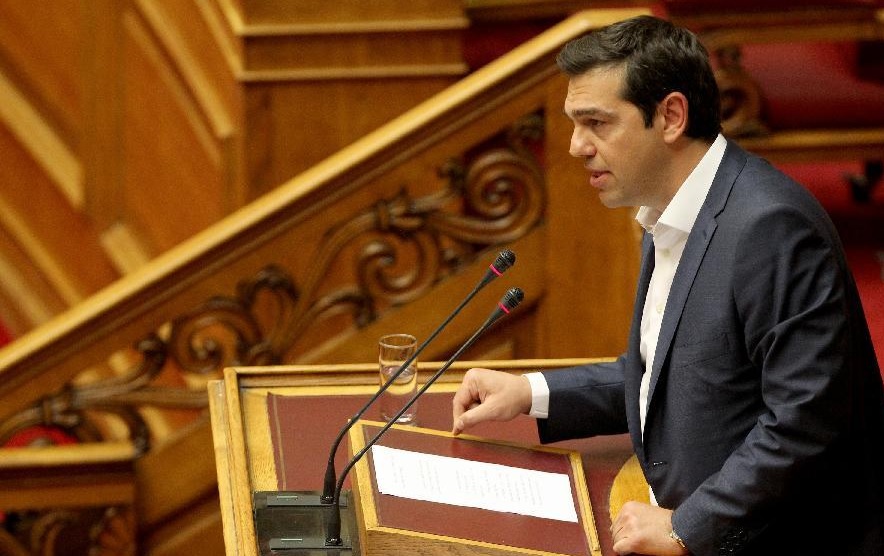 Greece edged closer to a eurozone exit after bailout talks with creditors collapsed after less than an hour. Talks in Brussels with international creditors collapsed late on Sunday, as European Union officials dismissed Greece’s economic reform plans as incomplete. Greek Prime Minister Alexis Tsipras rejected demands to make pension cuts, and has said he will wait for international creditors to become ‘realistic’. Tsipras’ anti-austerity Syriza party swept to power in elections in January in Greece, where 30 percent of the population currently live below the poverty line. Greece seeks a €7.2 billion bailout fund, in part to pay a €1.5 billion debt repayment due by the end of June. A debt default could trigger a Greek exit from the eurozone. European Commission officials have said that plans should be made for an emergency situation. Talks will resume on Thursday, when finance ministers from across the eurozone will meet in Luxembourg.

Prime Minister David Cameron, the Queen, and other senior royals are attending an event today to mark the 800th anniversary of the signing of the Magna Carta. Thousands of spectators are also attending the ceremony in Runnymede, Surrey, where the original Magna Carta was signed in 1215 by King John. Commemorations included a procession of boats on the River Thames, including the Royal Barge Gloriana. The signing of the Magna Carta is seen by historians as one of the most crucial moments in British history. While many details of the Magna Carta were relevant only to the rich and powerful, at the document’s heart lie principles of the independent supremacy of the law, and that those who govern should be subject to the same laws as those they govern. The Prime Minister today praised the legacy of the Magna Carta, and its implications across the world. The document is said to have inspired the United States constitution.

Fresh pro-democracy protests have hit Hong Kong ahead of a vote later this week on electoral reform. At the heart of the debate is a decision by Beijing to pre-screen candidates for the position of Chief Executive. Beijing argues that the proposed reforms are in line with previously made pledges for universal suffrage, while opponents say that the reforms will not offer true democracy. The territory’s lawmakers will begin debating the proposed reforms on Wednesday. Security measures near government headquarters have been stepped up ahead of the debate and vote. Inside sources have spoken of a confidence that Hong Kong will pass the reform package as offered. The package will require support from some of the city’s pro-democracy lawmakers to secure a two-thirds majority vote. Protests against the electoral reform blueprint saw tens of thousands of protesters take to the streets in late 2014.

Health-related stories make a few headlines today. The Guardian leads with news that lives are “at risk” in Britain’s National Health Service (NHS) struggles to deal with an “eating disorder crisis”. Experts have warned that “patients face critical delays”, with some eating disorder patients waiting up to three years for treatment. The Daily Telegraph leads with news of a temporary NHS finance chief earning £47,000 a month at Barts NHS Trust. According to the paper, Health Secretary Jeremy Hunt has ordered a ban on “lucrative deals”, while Barts NHS Trust is forecast to be facing the biggest financial deficit in its history. The Independent leads with news of a “new glass ceiling” – that of the ‘poshness test’. The paper reports that “Bright, working-class job seekers are locked out of top jobs if they are not from wealthy backgrounds”, according to the government’s Social Mobility and Child Poverty Commission. The Times leads with news that Britain’s youngest suicide bomber was “lured” by “Isis internet agents”. According to the family of teenage militant Talha Asmal, online Islamic State extremist were able to ‘turn’ Asmal “within months”.

On UK-China Business: stories about business between British and Chinese companies received some coverage from UK media outlets today. The Daily Telegraph reports a deal between travel firm Thomas Cook and China’s Fosun. Under the joint venture, Fosun will “work with Thomas Cook to develop domestic, inbound and outbound tourism and to introduce the powerful brand to the Chinese market”. The Guardian reports “doubts” on a contract with a Chinese engineering firm to construct the Swansea Bay tidal lagoon. Lawyers are looking into the awarding of the contract to China Harbour Engineering Company, “over allegations that it may have been awarded improperly”.