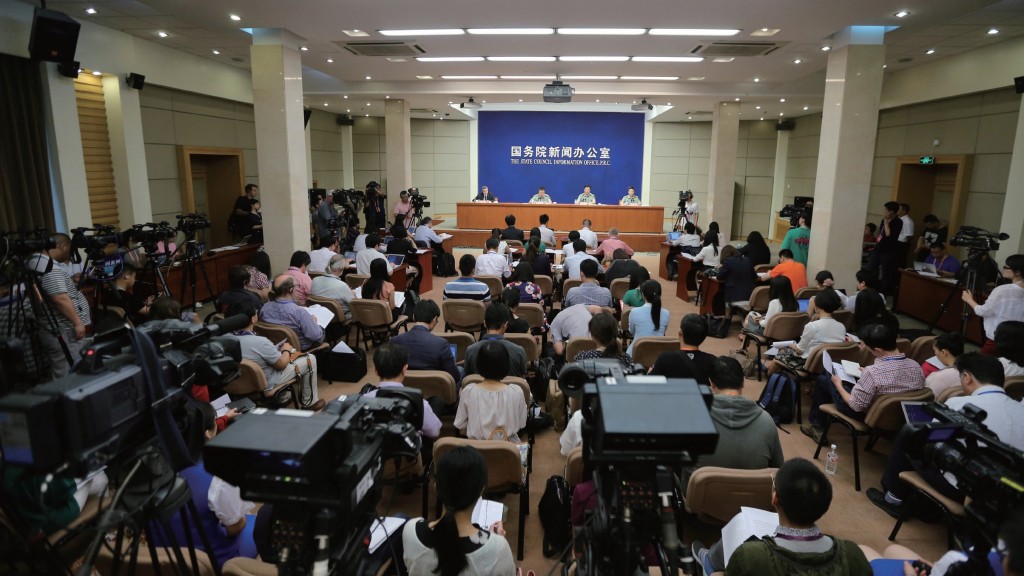 In its latest defence white paper, China envisions greater military capability and a global role for the PLA

In the past couple of decades, China’s defence policy has been a major focus for China watchers, given the country’s economic advancement and expanding military budget. The release of the latest defence white paper via the State Council Information Office, against the backdrop of rising tensions between Beijing and Washington over China’s massive land reclamation projects in the South China Sea, has predictably triggered a round of intense debate over China’s military capability and its global strategic intentions.

Using the official title “China’s Military Strategy,” the document is the ninth such white paper published since 1998, and the first to focus exclusively on military strategy, evidence of an ongoing evolution in Chinese military circles when it comes to strategic thinking, and providing observers with proof of profound changes in China’s foreign and defence policies.

For many analysts, the most notable highlight in the latest white paper has been the explicit confirmation that China will strive to increase its capability for power projection in all military domains.

Regarding the People’s Liberation Army (PLA) ground forces, the stated goal is to build “small, multi-functional and modular units” in order to shift “from theatre defence to trans-theatre mobility,” giving PLA ground troops the ability to carry out military operations in different regions.

The PLA Air Force, according to the white paper, will shift “from territorial air defence to both defence and offence,” boosting its strike capability, air and missile defence systems, airborne operations, intelligence countermeasures, strategic projection and “comprehensive support.”

The paper also identifies several “new domains” in the realm of national security, such as outer space and cyberspace, including vows that China will increase its capabilities in these areas. Comparatively, the most notable change of policy concerns the PLA Navy, which the paper says will gradually shift its focus from “offshore water defence” to the combination of “offshore water defence” with “open seas protection,” which some analysts have perceived as a hint at the eventual creation of a blue-water navy. “The traditional mentality that land outweighs sea must be abandoned,” runs one line in the paper. Although the paper does not elaborate on the concept of “open seas protection,” and what that might entail in practice, it clearly demarcates a major strategic shift towards a more assertive maritime strategy.

Another major development of the paper is elaboration on China’s extant “active defence” policy. A strategic concept that can be traced back to the early days of the Communist Party in the 1930s, the concept of active defence has been mentioned in several previous defence white papers, but the term’s precise meaning has remained rather vague.

This year’s paper, however, placed this concept in a prominent position by devoting an independent section to the government’s “strategic guideline of active defence,” boiling this concept down to “adherence to the unity of strategic defence and operational and tactical offence; adherence to the principles of defence, self-defence and post-emptive strike; and adherence to the stance that ‘We will not attack unless we are attacked, but we will surely counterattack if attacked,’” a reflection of China’s no-first-strike approach.

In its official interpretation of the white paper, the official Xinhua News Agency particularly emphasised the significance of “attack-counterattack.” Referring to an ancient Chinese saying often attributed to Sun Tzu (Art of War, 2, iii), this metaphor, the meaning of whichis somewhat lost in translation, emphasises the “tit-for-tat” nature of China’s active defence policy.

To a large extent, “tit-for-tat” has been an underlining rationale behind China’s recent assertive actions in its territorial disputes with neighbouring countries in both the East and South China seas, where Beijing has long argued that its actions are responses to the provocation and encroachment of other countries.

In the East China Sea, for example, China claims that Japan’s decision to nationalise the disputed Diaoyu/Senkaku islands in 2012 was an attempt to change the status quo by overturning an agreement reached in the 1970s to shelve the dispute. China’s response was to begin conducting regular patrols in the waters around the disputed islands.

Also in 2012, a Chinese maritime surveillance ship blocked an attempt by a Filipino naval vessel to arrest Chinese fishermen operating in the vicinity of the Scarborough Shoal (called Huangyan Island by China), a disputed reef between China and the Philippines. Arguing that Manila’s actions were an attempt to establish de facto administration over the shoal, China responded by effectively controlling access to the shoal’s lagoon, though the land remains unoccupied.

Some Chinese strategists have gone so far as to argue that China should develop its handling of its standoff in the Scarborough Shoal by following what they call the “Huangyan Model,” pledging to react disproportionately to any perceived incursion and thus raise the stakes should another country provoke Beijing by challenging its maritime interests.

Although such an approach has never been officially sanctioned by the Chinese government, it underpins some of China’s most significant maritime activities in the region. For example, one of the major arguments that China uses to support its massive land reclamation and construction projects on disputed shoals in the South China Sea is that it is a legitimate response to similar activities undertaken by other countries, specifically Vietnam and the Philippines, that have lasted for two decades, though on a much smaller scale.

By emphasising its “post-emptive” and “defensive” doctrines, China appears to be trying to refute the argument that it is abusing its power without actually having to compromise with its weaker neighbours.

Chinese officials have reiterated this stance again and again in response to criticism over its recent construction activities in the South China Sea. “No country should expect China to swallow the bitter pill of our sovereignty, national security or development interests being compromised,” said Fan Changlong, vice chairman of the Central Military Commission, China’s Joint Chiefs, in remarks later echoed by Foreign Minister Wang Yi. “China’s resolve for safeguarding its sovereignty over the islands and reefs in the South China Sea is as strong as rock,” Wang said in response to an alleged threat by the Pentagon to dispatch military aircraft or vessels to within 12 nautical miles of the disputed shoals.

While the recent tension in the South China Sea has led many to focus on maritime policy, a more fundamental change reflected in the latest white paper, arguably deserving of closer attention, indicates that China is adopting an increasingly global scope when it comes to articulating its military strategy.

In past years, as priority was given to economic growth, China’s defence policy served a supporting role, with its main task being to safeguard domestic growth and ensure social stability. But in recent years, China has started to adopt an increasingly global perspective.

As in previous defence white papers, the 2015 paper starts with an assessment of the “national security situation” facing China, a section that has in the past served as a starting point for the formulation of overall domestic and foreign policy.

While reiterating that China faces “a generally favourable external environment,” adding that China remains in “an important period of strategic opportunities for its development,” an assessment consistent with that of its predecessors, the 2015 paper subtly diverges in its description of China’s relations with the outside world. Instead of emphasising the importance of “a favourable international environment” for securing China’s economic development, the paper indicates a more “reciprocal” approach to international relations.

“China’s destiny is vitally interrelated with that of the world as a whole. A prosperous and stable world would provide China with opportunities, while China’s peaceful development also offers an opportunity for the whole world,” the paper reads.

In assessing primary security issues, the paper makes direct references to the US’s “balancing strategy,” Japan’s efforts to “dodge the post-war mechanism,” and “provocative actions” by “some of [China’s] offshore neighbours.” Simultaneously, the paper also identifies a variety of other threats to both world peace and China’s national interests: “power politics,” “neo-interventionism,” terrorism, and “ethnic, religious, border and territorial disputes.”

Warning that the national security issues facing China “encompass far more subjects, extend over a greater range, and cover a longer time span than at any time in the country’s history,” the paper concludes that “in response to the new requirements coming from the country’s growing strategic interests, the armed forces will actively participate in both regional and international security cooperation and effectively secure China’s overseas interests.”

For many analysts, the apparent shift in policy is not surprising at all, as it has long been expected that China’s military would assume a global role as its overseas interests grew. Since China conducted a historic evacuation of its citizens from Libya in 2011, such overseas rescue missions have become a “new normal” given China’s unprecedented overseas economic activity. More recently, China sent an entire combat battalion to join the UN  peacekeeping mission in South Sudan, which analysts have equated with a desire to protect Beijing’s investments in this troubled region.

China’s recent reception in June of Myanmar’s iconic democracy activist and opposition leader Aung San Suu Kyi also marks a landmark departure from China’s previous diplomatic policy, which eschewed engagement with foreign opposition parties and focussed almost entirely on leader-to-leader interactions. It is estimated that China has engaged with opposition parties in more than 50 countries between 2013 and 2015, an unprecedented transformation of its diplomatic scope.

The 2015 paper also envisions a robust strategic military partnership with the United States, Russia and other countries spanning Europe, Africa and the Asia-Pacific, through which, it argues, China will “strive to establish a new framework for security and cooperation conducive to peace, stability and prosperity in the Asia-Pacific.”

A more global scope was evidenced by the recent trip made to the US in June by Fan Changlong, a vice-chairman of the Central Military Commission, during which Fan urged Washington to look beyond the South China Sea and to go to “higher ground and look further into the future by paying more attention to other, more important regional and international issues.”

During Fan’s trip, both sides signed an agreement to strengthen ties and develop a more constructive military relationship, as well as an air-to-air shared code of conduct to reduce the risk of errors or mishaps when military aircraft from both sides are operating in close proximity. Now, it appears that tensions between the two countries have begun to ease three months ahead of a planned state visit to the US by Chinese President Xi Jinping.

But as China has spelled out its ambition for a greater global role and a more active defence policy, as manifested in its latest defence white paper, whether such disagreements can be compartmentalised in light of their immense importance to the relative military superiority of each nation in what both sides see as a crucial sphere of influence, the South China Sea, will depend on an unprecedented diplomatic effort by all concerned parties.

China Report | by Li Jia and Liu Yutong Private Power
Despite unabated political tension, cultural exchanges between China and Japan have increased in recent months. These ties are expected to help ease diplomatic strain A 3,000-member Japanese delegation of tourism […]
China Report | by Yu Xiaodong An Asian Century?
Amid border disputes and a strategic rivalry, China and India seek to improve economic ties and develop mutual trust “India is ready for business,” Narendra Modi told a group of […]
China Report | by Yu Xiaodong Final Round
Hong Kong’s lawmakers and citizens are split over an upcoming vote on the central government’s proposal for establishing universal suffrage in the territory Although it has been several months since […]
Economy | by Li Jia All In
The private sector, including businesses and non-profit organisations, is expected to set the tone of One Belt, One Road On May 10, 2015, International Mother’s Day, China’s central bank declared […]