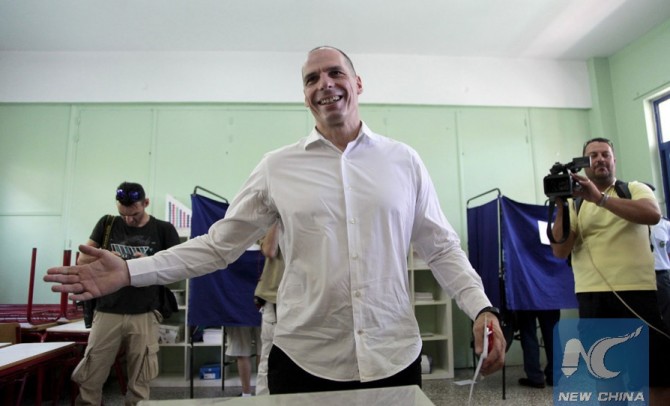 Greek Finance Minister Yanis Varoufakis has resigned, just hours after Greek voters sided against accepting international bailout terms that would impose further austerity measures on the country. In a press conference, Varoufakis said that he hoped his departure would be useful in finding a solution to the Greek economic crisis. Greece’s rejection of current bailout terms moves the country closer to an exit from the eurozone. Global financial markets have fallen in the wake of the result, while emergency talks between major EU figures have been planned over the coming days. The resignation of Varoufakis, an opponent of austerity who repeatedly clashed with EU negotiators, suggests that Greek Prime Minister Alexis Tsipras hopes to resume negotiations and find a new deal for its debt crisis. The International Monetary Fund has acknowledged that some degree of restructuring of Greek debt will be required, given the large size of the debt. The European Central Bank will meet to decide whether to extend further funding to Greek banks, which will reportedly run out of funds in a matter of days. Varoufakis’ replacement is expected to be announced later on Monday.

Dementia patients in Britain are being failed by inadequate health and social care services, GPs have said in a survey by the Alzheimer’s Society. In the survey, three-quarters of GPs said their dementia patients were forced to rely on friends, family, or other unpaid carers, due to insufficient help from health and social care services. The survey of over 1,000 GPs raises serious concerns for the state of dementia care in Britain. According to the survey, one quarter of GPs are reluctant to diagnose patients with Alzheimer’s if support services are not in place, while a similar amount admitted that a lack of training hampered their ability to manage patients with the condition. The government has said that UK dementia diagnosis rates are among some of the world’s highest, with 600,000 NHS staff trained in dealing with dementia patients.

Stocks rose in China on Monday, following unprecedented measures by Chinese authorities to stabilise China’s plunging stock markets. The CSI300 closed up 2.9 percent, while the Shanghai Composite Index closed up 2.4 percent. Earlier rises in the day had been as high as 8 percent, causing concerns from some observers that the market’s rebound could be unsustainable. The rise comes after brokerages agreed at the weekend to buy up large amounts of stocks, with assistance from Chinese authorities. Authorities have also suspended the issuing of new shares, with initial public offerings (IPOs) also halted. The rise in stocks follows a short but severe period of falls, with 30 percent of the markets’ value lost in the space of a few weeks. Beyond the stock market, China faces a wider period of economic slowdown, with growth at its lowest levels in 25 years.

Greece dominates front pages today, following the country’s referendum on whether to accept the bailout terms of international creditors. The Financial Times writes in its headline that Greece’s future in the eurozone “hangs in balance”, following the country’s “Decisive message to reject creditors demands” with a ‘No’ vote. The European Central Bank must now decide whether to “pull support”, the paper writes. The Guardian writes in its headline that Greek voters have chosen to “defy Europe” through their “Landslide vote against further austerity”. Greek opposition leader Antonis Samaras has stepped down following the result, the paper reports. The Independent writes that the vote has plunged Europe “into crisis”. The paper writes of “huge celebrations in Athens” as voters opt to back Prime Minister Alexis Tsipras. Greece’s decision presents the EU with “the greatest political crisis in its history”, the paper writes. The Daily Telegraph writes that Europe is “in turmoil” as Greece moves closer to an “exit” from the single currency. The eurozone is now “braced for financial crash”, the paper reports, with Chancellor Angela Merkel flying to Paris “for crisis talks”.

On the Chinese stock market: Observation and analysis of China’s turbulent stock market has received coverage from some UK media outlets. The BBC writes of “Panic, invincibility and blame” in the markets. Big players in the markets “were given no choice but to sign up to a government rescue”, the BBC’s Carrie Gracie writes. Yet some “wonder why the government is panicking at all”, given that recent falls are far outweighed by the rise in shares in the year leading up to the recent fall. The Guardian writes that emergency measures taken by Beijing “look like a ridiculous over-reaction”, and asks “What would it do in a real crisis?” The piece suggests that authorities may struggle to handle with a crisis in China’s property market.