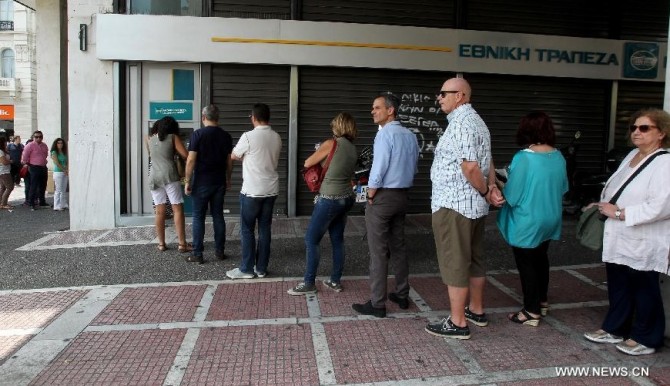 Greece looks set to miss a crucial €1.6 billion debt repayment to the International Monetary Fund (IMF) due on Tuesday, defaulting on its debt and pushing the country closer to an exit from the eurozone. The looming default has already had a negative impact on European stock markets, with European Finance Ministers warning that worse could lie ahead should negotiations break down further. Greece’s current bailout fund is also due to expire on Tuesday, with no further bailout funding from creditors currently secured. Greek Prime Minister Alexis Tsipras has called for a referendum on 5 July for Greece to decide whether to accept bailout terms that would impose further austerity on the country. European leaders have said that a vote against the bailout would effectively force Greece to leave the eurozone. Negotiations have shown very little progress in recent days, with creditors angered by Tsipras’ decision to call a referendum. While Greek banks are to be closed all week, long queues have formed as citizens attempt to withdraw savings. Greece has seen public protests against its creditors, calling for a vote against a bailout on 5 July.

Four Britons injured in Friday’s terror attack in Tunisia have arrived back in Britain, flown in on an RAF transport plane. 38 people were killed in the attack; 30 of those killed are believed to UK nationals, though so far only 18 have been confirmed. Britons affected by the attack in Tunisia are receiving UK consular assistance. Tunisian authorities made several arrests on Monday related to the attack, in which a lone gunman stormed a beach resort in the town of Sousse. The gunman reportedly had links to Islamic extremist group Islamic State (IS). UK police are meanwhile undertaking a major anti-terrorism exercise on Tuesday, which will involve over 1,000 police officers and last until Wednesday afternoon. The UK has increased its counter-terrorism measures in recent months, with a newly established ‘SAS-style’ specialist firearms unit trained to respond to extremist attacks.

China has completed several of its land reclamation projects in the South China Sea, China’s Foreign Ministry announced on Tuesday. A Foreign Ministry spokesperson said that reclamation had been finished in recent days, with China now set to continue with construction projects on the newly-built islands. China has emphasised the civilian purposes of the islands, including research and search and rescue, though has acknowledged that some islands will also serve military purposes. Military facilities reportedly include a 3,000 metre runway, currently under construction. The construction of islands in the South China Sea, where several nations have competing territorial claims, has been a source of international tension. The United States and the Philippines have been most prominent in their criticism of China’s land reclamation work; China yesterday, meanwhile, hit back at the Philippines for producing a documentary on the South China Sea with an anti-China stance.

Greece continues to dominate front pages, as the country edges ever closer to economic crisis. With a Greek referendum on bailout terms scheduled for 5 July, the Financial Times writes in its headline that a “bailout rejection would spell ‘No to Europe’”. European leaders have told Greece that the referendum effectively “is on euro membership”. The crisis has sent “Tremors” across European markets, the paper writes. The Guardian writes that Greece has been warned by the “Three biggest eurozone nations” that a ‘No’ vote “means you are out of Europe”. UK Chancellor George Osborne has joined in warning that Greece leaving the eurozone could affect the UK economy. The Independent writes in its headline that Greece has “One day to find €1.6bn”. If the country cannot make its debt repayment to the International Monetary Fund (IMF), it will become “the first in history to default on an IMF loan” and a Greek eurozone exit “will move a giant step closer”. The Daily Telegraph writes that Britons have been given a “holiday euros alert” in the face of the crisis, with the UK government warning UK tourists to bring thousands of euros in cash if holidaying in Greece. In other news, The Times reports that head teachers have been told to “Check schools for future terrorists”. Schools will be told to “look out for pupils being groomed by extremists”, following a terrorist attack in Tunisia in which 30 British tourists were killed.

On Sino-European relations: Chinese Premier Li Keqiang’s ongoing visit to Europe has received coverage from some UK media. The Financial Times reports that China is pushing for a “China-Europe investment treaty”, after Premier Li called for new treaties to “give Chinese companies a smoother path to acquiring European counterparts”, as well as explore the possibilities of a new free trade area. China is “scouring Europe for acquisition targets to boost technology and brand values”, the paper writes. The BBC uses Premier Li’s visit to look at the Greek financial crisis from a Chinese standpoint, writing that China is watching Greece with “dismay, strategic patience and cunning”. China is concerned over the future of its stake in Greece’s Piraeus port, the BBC writes, but will also be weighing up the possibility of gaining influence through the Greek crisis.