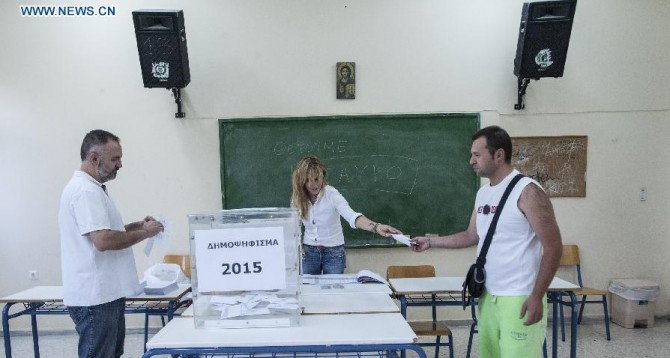 Millions of Greeks are heading to the polls today, to vote in a crucial referendum on the terms of a financial bailout from international creditors. Greece seeks funding to repay billions in debts, including a €1.6 billion debt repayment to the International Monetary Fund due last Tuesday. International creditors will only grant Greece further funding if the country accepts further austerity measures. A vote against accepting the bailout terms could mean a Greek exit from the eurozone, undermining the wider financial stability of Europe. Opinion polls currently suggest an even split between ‘Yes’ and ‘No’ votes. Greece’s anti-austerity Prime Minister Alexis Tsipras has said he will stand down as leader if the country votes in favour of accepting bailout terms. German Chancellor Angela Merkel has said bailout negotiations cannot continue until after the result of the referendum is announced.

The BBC will be forced to meet the cost of free TV licences for over-75s as part of the next government Budget, it has been revealed. Chancellor George Osborne said on Sunday that the BBC should make a “contribution” towards deficit reduction. The move will reportedly cost the BBC £650 million. The government and the BBC are also in talks over charging a licence fee for the use of the BBC’s iPlayer service, in order to recoup some of the costs of the plans. The BBC has declined to comment on the plans at this stage.

Chinese authorities have taken special measures to try and prevent further falls in the Chinese stock market. Measures include a suspension of initial public offerings (IPOs), after the market plunged 30 percent in three weeks. Top share brokerages have pledged to invest their own money into stocks – a reported minimum of US$19 billion – in an attempt to stabilise the market. The plunge in the market has cost approximately US$3 trillion in market value. While authorities have eased financial policy in recent months in an attempt to improve slowing growth, observers have suggested that continued financial easing will be necessary.

Money matters make a few headline,s as proposals from the Chancellor’s upcoming budget emerge. The Sunday Times leads with news that Chancellor George Osborne will launch a “£650m budget raid” on the BBC licence fee, forcing the organisation to cover the cost of free television licences for over-75s. The Sunday Telegraph leads with news of a “U-turn on ‘excessive’ green taxes” after “the true cost of sustainable energy subsidies is revealed” to amount to over £9 billion by 2020. Osborne will announce plans to ditch targets set while in coalition with the Liberal Democrats to increase the proportion of revenue taken from environmental taxes. The Observer leads with comments from a “key” ally to the Prime Minister that “Firms must be forced to raise low pay”. The former Downing Street aide sets out plans for demanding firms pay the living wage to employees in an article for the paper. The Independent on Sunday leads with a report into “Britain’s hidden young homeless”. According to one study, “The number needing a place to sleep is three times higher than official rates”.

On Sino-US cyber-attack fears: Hillary Clinton’s criticism of China for alleged cyber-attacks received some coverage from UK media over the weekend. The BBC writes that the US Democratic presidential candidate has “accused China of stealing commercial secrets and government information”. The BBC writes that “China has previously argued that it is also the victim of hacking attacks”. The Daily Telegraph’s agency piece writes that Clinton made a “strongly-worded speech”, in which she accused China of “trying to ‘hack into everything that doesn’t move in America’”.