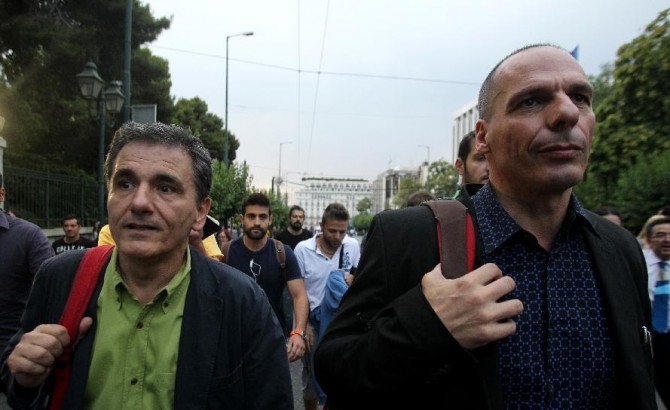 Greek Prime Minister Alexis Tsipras is expected to present new proposals for a bailout deal at an emergency eurozone summit on Tuesday. Greece faces the risk of defaulting on €323 billion worth of debts, and of leaving the European single currency. Greek politicians united yesterday in signing a statement insisting Greece stay in the euro. At today’s summit, Tsipras is expected to ask for debt relief amounting to 30 percent of Greece’s debts. Central to negotiations will be new Greek Finance Minister Euclid Tsakalotos, who replaced Yanis Varoufakis on Monday. The summit comes just two days after Greece voted against further EU austerity measures in a snap referendum, and one day after the leaders of Germany and France held emergency talks to formulate a united negotiating front. The International Monetary Fund has acknowledged that some degree of debt restructuring will be required for Greece. Banks are to stay closed in Greece until at least Wednesday, though the European Central Bank has said it will continue emergency lending to Greece on condition in provides more security for existing loans.

Flowers have been laid in Hyde Park to mark the tenth anniversary of the 7 July bombings in London, in which 52 people were killed. The attack, carried out by four suicide bombers with links to al-Qaeda, was the worst terrorist attack to have taken place on British soil. Three Tube trains and one bus were targeted in the attack. Prime Minister David Cameron and Mayor of London Boris Johnson were among those who laid wreaths at the Hyde Park memorial to the victims on Tuesday morning, with a minute’s silence to be held at 11:30 BST. Tube trains and buses are expected to be halted during this time. Memorials have also been held at the places where the attacks took place, with a memorial at St Paul’s Cathedral to be held later this morning.

Chinese stock markets have again fallen, resisting attempts by Chinese authorities to stabilise the market. China’s CSI300 index closed down 1.8 percent on Tuesday, with the Shanghai Composite Index closing down 1.3 percent. Both markets had grown on Monday following government support measures launched over the weekend. Chinese stock markets have plunged 30 percent in recent weeks, following a year of breakneck growth. Observers have also been drawn to a statement on Tuesday by Chinese Premier Li Keqiang on a government website – a statement on China’s economy which fails to mention the recent stock market plunge. Analysts have suggested that the market will continue to fall, due to liquidity issues facing investors.

Uncertainties over Greece’s future in the eurozone continue to dominate the headlines. The Financial Times writes in its headline that Greece has been offered a “last chance to avoid crashing out” of the European single currency. A new reform proposal from Greek Prime Minister Alexis Tsipras is “to be presented tonight”, the paper reports, but leaders in the eurozone “remain sceptical” of success. The Guardian describes the chance as a “24-hour deadline”, with German Chancellor Angela Merkel demanding a “new plan from Athens”. There are also fears Greek banks “will run out of cash” imminently, the paper adds. The Daily Telegraph writes in its headline that Germany is refusing to “let Athens off hook”. According to the paper, UK Chancellor George Osborne has urged Chancellor Merkel to “back down and open talks with Athens”, after Merkel said that Germany could not write off Greek debt without making similar offers to indebted countries Ireland, Italy and Spain. The Independent reports that Tsipras has dragged Russia’s President Putin “into battle with Europe”, with Russia now talking up a “closer alignment with Athens”. Tsipras reportedly called President Putin to discuss the result of Greece’s referendum on bailout terms, the paper writes. The Times leads with news that Britons will now be able to “Shop all day on Sundays” following a “trading shake-up” set to change Sunday trading laws. Chancellor George Osborne is preparing to “confront unions” over plans to free larger supermarkets from Sunday trading restrictions.

On the Chinese stock market fall: the continued fall in China’s stock markets received coverage from most UK media outlets on Tuesday. The BBC reports that the downtrend “is raising concerns about whether policymakers have the ability to stabilise the market”. The Independent reports that Chinese authorities’ market intervention halted the stock slide “for about an hour” on Monday. The Financial Times reports that the stock fall is breeding “despair” in investors, reporting the foiled suicide of one investor, but notes that the Shanghai Composite Index “is still up 78 per cent over a year earlier”. The Daily Telegraph features a piece explaining why “Chinese stocks are in turmoil”, noting rising investor numbers and encouragement from the state as reasons why the stock market grew so quickly. The Guardian features a commentary piece from Nils Pratley that writes Beijing’s attempt to intervene in the markets “will end badly”. The Chinese leadership is “subsidising speculation”, the Pratley writes, while also “sending an unmistakeable message that they fear a crash is a possibility”.