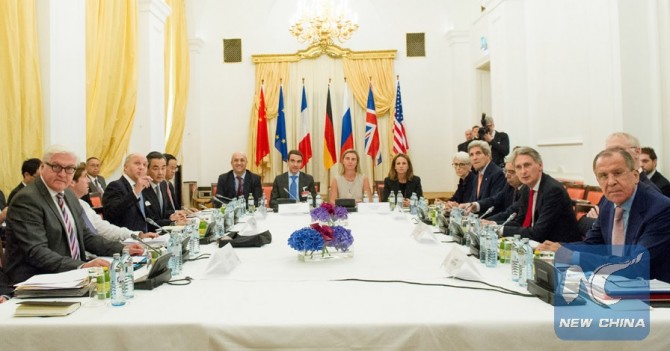 World powers have reached a deal with Iran on limiting its nuclear programme in exchange for the lifting of economic sanctions. The deal will allow United Nations nuclear inspectors extensive access to nuclear sites in Iran, while sanctions on oil and gas trading, financial transactions, and aviation and shipping will be lifted. The agreement, reached in Vienna during talks on Tuesday night, is the culmination of nine years of negotiation between Iran and six major powers: the US, the UK, Russia, China, Germany and France. Iran has insisted that its nuclear programme is for peaceful purposes, though its claims have been met with suspicion, especially by the United States. Iranian Foreign Minister Mohammad Javad Zarif hailed the agreement as “historic”, while acknowledging the hard compromises made by all parties.

The Conservative government has delayed a vote on relaxing the fox hunting ban, following resistance from the Scottish National Party (SNP). The vote had been planned for Wednesday, but has been postponed following an SNP decision to oppose the proposed changes. The SNP regularly abstains from votes that do not affect Scotland, but decided to make an exception in the wake of “overwhelming demand” from England. The SNP’s leader at Westminster, Angus Robertson, said that the vote’s postponement was a reminder of the fragility of the government’s majority in parliament. The vote could now be postponed until after the introduction of restrictions on Scottish MPs voting on non-Scottish issues.

China’s state-backed Tsinghua Unigroup Ltd is preparing a US$23 billion bid for US memory chip manufacturer Micron Technology, in what would be the largest ever Chinese takeover of a US company. Tsinghua will reportedly offer up to US$21 per share in the firm, almost a 20 percent premium of Micron’s share price on Monday. An offer could come as early as Wednesday. Tsinghua Unigroup, a company controlled by China’s Tsinghua University, has struck several international research deals in the field of superconductors; a deal with Micron would consolidate the firm’s position as a leader in China’s technological development. Any takeover bid for Micron from China will require approval by the Committee on Foreign Investment in the United States. Analysts have expressed scepticism that Tsinghua’s offer would be approved in the current political climate.

Pay inequality in the workplace makes the headlines following new government proposals. The Guardian writes in its headline that major firms “will be forced to reveal gender pay gap”. The new rules, which will apply to firms employing over 250 people, will end the “differential of women earning 80p for every £1 paid to men”. The Times writes in its headline that the Prime Minister has vowed to “close the pay gap for women” with the plans, which will “shame bosses” whose companies have a pay gap. The paper notes that the legislation was passed by the Labour government in 2010 but was “suspended” by the coalition government. The Daily Telegraph writes that firms will be “shamed over women’s pay”. The Prime Minister is pitting himself “against business leaders” with the law, the paper reports. The Independent leads with news that the Scottish National Party (SNP) “will defeat plan to relax hunting ban”. Though the SNP usually abstains from votes that do not affect Scotland, the party has said it will make an exception in this case that leaves plans to relax the hunting ban “likely to be defeated”. The Financial Times leads with news that Greece “faces rebellion in Athens after accepting €86bn EU bailout”. Prime Minister Alexis Tsipras is “likely to rely on opposition” to get the bailout deal approved in parliament, the paper reports.

On Tibet: a few Tibet-related news stories have received coverage from UK media recently. The BBC reports that prominent Tibetan monk Tenzin Delek Rinpoche “has died in a Chinese prison after 13 years in jail”. Tenzin Delek was imprisoned for his involvement in a 2002 bomb plot in Chengdu, a charge he denied. The Guardian’s agency piece reports that Tenzin Delek’s family have called for the release of his body. The Independent reports that police “opened fire” on Tibetans protesting Tenzin Delek’s death in Sichuan province, though no deaths from the protests have been reported.