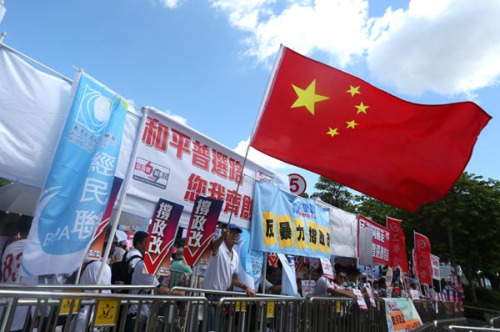 Hong Kong’s parliament has voted against political reforms that would allow the territory to introduce universal suffrage for its leadership elections for the first time in 2017. Pro-Beijing lawmakers, who had been expected to support the vote, held a mass walk-out ahead of the vote, with the motion defeated with 28 votes against and 8 votes in favour. The reform package would have required 47 votes in favour to have passed. Hong Kong’s pro-democracy lawmakers have argued that the reforms did not offer true democracy, due to a ruling from Beijing that election candidates must be pre-screened by authorities. The ruling caused widespread protests in Hong Kong in late 2014. The vote’s result raises questions for the future of political reform in Hong Kong; pro-Beijing politicians have warned that a vote against the proposed reforms would set back Hong Kong’s transition towards democracy.

Nine people have been killed after a gunman opened fire at a church in Charleston, South Carolina. The shooting at the historic black church is understood to have been a hate crime. The suspect of the crime, described as a white male in his 20s, is still at large. A police manhunt for the suspect is underway. A reward for the gunman’s capture is expected to be announced on Thursday. Eight of the victims were killed inside the Emanuel African Methodist Episcopal Church on Wednesday night, while a ninth victim died shortly afterwards. Some survivors have been reported, with one survivor claiming they were deliberately spared by the gunman to report what happened. Among those killed was the church’s pastor, state Senator Clementa Pinckney. Pinckney had spent much of Wednesday campaigning with Democratic presidential candidate Hillary Clinton. Messages of support have been made by US politicians across the political spectrum. Republican presidential candidate Jeb Bush has cancelled a visit to Charleston that had been planned for Thursday.

A deal on a Greek bailout is still possible, Germany’s Chancellor Angela Merkel has said. Speaking in Germany’s parliament, Chancellor Merkel sought to assuage concerns over a feared Greek debt default and subsequent eurozone exit. Chancellor Merkel said that Germany was striving to keep Greece in the euro, but said Greece must accept reforms. Merkel’s comments come ahead of a meeting of European Finance Ministers in Luxembourg on Thursday, where Greece will be high on the agenda. Greece requires funding to make a €1.5 billion debt repayment due by the end of June. Talks have faltered over Greece’s refusal to accept economic reforms and austerity measures imposed by Greece’s creditors, the International Monetary Fund (IMF), the EU and the European Central Bank (ECB). Greece’s negotiators say that their efforts to compromise have been rebuffed by inflexible creditors. Greece’s governing Syriza party is opposed to imposing further austerity on the country, where 30 percent of citizens live below the poverty line. Greece’s Finance Minister has said that while an immediate solution should not be expected from Thursday’s talks, a foundation could be set.

A mix of stories in the headlines today. The Guardian leads with news of Greece, where the country “can’t pay, won’t pay” the International Monetary Fund (IMF). Hopes are slimming on the day of “last-ditch talks”, the paper writes, after Athens’ “Defiant bank chief” told Greece’s creditors that the country “has no money left”. The Daily Telegraph leads with news that the “Early retirement rip-off” has been ended following a campaign by the paper. Chancellor George Osborne has promised to outlaw excessive penalties on those withdrawing money from their pension in their 50s and 60s. The Independent leads with a demand from MPs to Sir John Chilcot to “publish your report – or quit”, after Chilcot said that his six-year investigation into the Iraq War could be delayed by another year. The Prime Minister has expressed his frustrations over the delay, the paper reports. The Financial Times leads with news that the US Federal Reserve has ‘opened the door’ for a “September increase in interest rates”, with “Cautious optimism” in the air after a poor first quarter in 2015. The Times leads with news that “Everyday plastics” are bringing about a male “fertility crisis”. According to scientists, only one in four males will have ‘good’ sperm, due to inhalable chemicals from items such as shower curtains and cleaning products affecting male foetuses in pregnant women.

On Hong Kong: Hong Kong lawmakers’ vote against a political reform package received coverage from most UK media outlets. The BBC writes that “The outcome was expected”, though the “dramatic” walk-out by some lawmakers was not. The BBC describes scenes of confusion following the walk-out, reporting that some called the vote a “farce” as a result. The BBC also writes of “emotional speeches” during the debate over the vote, featuring prominent quotes from the debate. The Guardian reports that Hong Kong has defied “Beijing’s insistence” with the vote, describing lawmakers’ walk-out as “an apparent attempt to halt proceedings”. Beijing is “unlikely to cave in” to further reform demands, the paper writes. The Daily Telegraph writes that the vote has angered mainland China, and that pro-democracy protesters remain “optimistic” for eventual reforms. The Independent describes the walk-out as a “mix-up”.