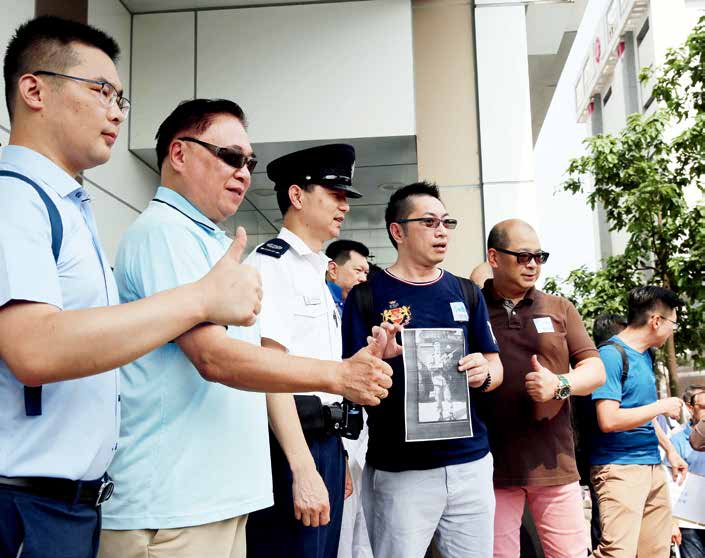 As protests and riots spread in Hong Kong, Beijing warns of a colour revolution and the way it’s dealt with is evolving.

For almost three months, Hong Kong has seen unprecedented unrest as protests against a controversial extradition bill have escalated into what protesters called a “revolution” manifested in their iconic slogan “Liberate Hong Kong: Revolution of our times.”

While the media has mostly focused on the sensational day-to-day clashes, a closer look at the historical and current issues will reveal the underlying reasons behind the unrest.

On the surface, the catalyst for the protests was a controversial bill the Hong Kong SAR government introduced that would allow extradition of suspected criminals to 20 countries and regions, including the Chinese mainland.

The bill was drafted in response to a gruesome case in 2018 involving a Hong Kong teenager who allegedly murdered his pregnant girlfriend in Taiwan and dumped her body in a suitcase before fleeing back to Hong Kong. Without an extradition treaty, the suspect could not face trial in Taiwan. He was eventually sentenced to only 29 months on charges of money laundering.

While the Hong Kong government said the bill would close a major loophole in its gal system and prevent the city from becoming a “haven for fugitives,” it quickly reignited anti-Beijing sentiments among a portion of the city’s population, especially younger residents.

A former British colony, Hong Kong was returned to China in 1997. Since then, the city has been governed as a special administrative region under the “one country, two systems” policy. The Basic Law, the city’s mini-constitution, pledges that the political and economic systems of the city would not be changed for 50 years to further smooth the transition of power.

Over the following years, Hong Kong continued to experience prosperity, stability and closer economic ties with the Chinese mainland.

Later in 2012, another effort to introduce a “moral and national education” programme in the city was similarly defeated, with opponents branding it a “brainwashing” scheme. Some argue that it is this lack of sense of belonging to the motherland that has worsened the gap between the two sides.

However, China’s continued growth has led to deeper economic integration, with investments pouring in and tens of millions of mainland tourists visiting the city every year.

But instead of improving the relationship, a sense of vulnerability and anxiety gripped many in Hong Kong as they faced rocketing housing prices, an increasing income gap and decreasing social mobility.

Many mainlanders view the city’s problems as consequences of its own policy failures combined with the city’s declining significance because of China’s opening-up. For Hongkongers, their woes are the result of an encroaching central government seeking to erode their way of life.

The early 2010s saw sporadic protests against the waves of mainland immigrants and tourists, with some protesters calling them “locusts.” Then in 2014, activists in Hong Kong launched a massive Occupy movement in the city’s central business district to protest a plan proposed by Beijing regarding elections for the city’s chief executive.

According to Beijing’s proposal, candidates for Hong Kong’s top position can only be named by a nomination committee composed of some 1,200 delegates from various sectors of Hong Kong society.

Beijing argued that the process is to ensure that all candidates will support the “one country, two systems” principle and will not challenge the Chinese sovereignty over Hong Kong.

But a large portion of the Hong Kong public saw the scheme as a way for Beijing to control the election process. No one emerged a clear winner in the end.

While the Occupy movement failed to achieve its goal, Beijing’s proposal also failed to pass the LegCo, or Hong Kong’s Legislative Council. 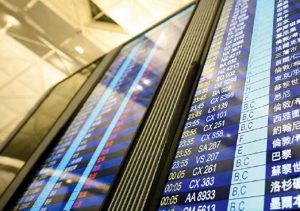 The battleground shifted in 2016 to the legislature and the court, when six “localist” lawmakers were dismissed after refusing to complete an oath to uphold the Basic Law and swear allegiance to the Hong Kong Special Administrative Region of the People’s Republic of China.

For the pro-establishment camp in Hong Kong, the conclusion of the legal battle appeared to have curbed the momentum of what many consider an emerging independence movement in Hong Kong. The perception was further reinforced when the pro-democracy camp lost at least three seats in the LegCo elections held in 2018, effectively losing its veto power.

It may be this newly obtained confidence that spurred the Hong Kong government to introduce the extradition bill. But when the bill was proposed in early 2019, it was immediately met with resistance, with some arguing the bill was designed to subject Hongkongers to the legal system of the Chinese mainland.

The Hong Kong government responded to the concerns with several rounds of revisions, including the explicit exclusion of political and economic crimes from the bill and raising the bar for extradition to crimes punishable by seven years or more. But opposition only grew stronger.

Believing she had enough support within LegCo, Hong Kong Chief Executive Carrie Lam decided to push ahead with the bill. The move quickly backfired.

On June 9 and 16, hundreds of thousands of people rallied against the bill outside government headquarters in what many called the city’s largest protests in decades.

The size of the protest marches was disputed. Protest organisers claimed that more than one million people attended the June 9 protest and two million participated on June 16. Police put the numbers at 240,000 and 330,000 respectively.

Regardless, the protests were big enough to force Lam to admit defeat. On the night of June 16, Lam issued a written apology and promised to shelve the bill. Two days later, she declared the bill “dead.”

But the protests persisted, with many demanding that the bill be formally withdrawn.

In the meantime, calls for “liberation” began to take hold of the city. On July 1, the 22nd anniversary of Hong Kong’s return to China, protesters broke into and vandalised the city’s LegCo building.

Protesters later made five demands: official withdrawal of the bill, an independent investigation
over alleged “police brutality,” withdrawal of the official classification of some of the protests as “riots,” charges to be dropped against all arrested protesters, and the resignation of Chief Executive Carrie Lam.

The last demand later evolved into one for genuine universal suffrage, reviving the cause of the failed Occupy movement in 2015.

On July 22, protesters-turned-rioters besieged Beijing’s Liaison Office in Hong Kong, where they defaced the national emblem outside the building. As Lam refused to back down and the police became more assertive, violent clashes broke out on Hong Kong’s streets. Protesters hurled projectiles including rocks, steel bars, petrol bombs, and in some cases committed arson.

When police moved to disperse protesters, they began using guerrilla-style tactics. For several
days in August, Hong Kong International Airport, one of the world’s busiest, was paralysed as protesters blocked check-in counters. 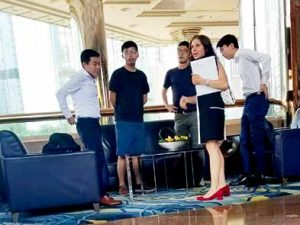 Julie Eadeh, the political officer of the US Consulate General in Hong Kong, is seen with HK protest leaders 6th Aug 2019

As the unrest escalated, Beijing voiced its support for the Hong Kong government and its police force, and gradually beefed up its warnings.

On August 6, Yang Guang, spokesperson for China’s Hong Kong and Macao Affairs Office (HKMAO) condemned the protests as going “way beyond the scope of freedom of assembly and demonstration” and “morphing into extreme acts of violence.”

On August 8, Zhang Xiaoming, head of the HKMAO, said the protests have since taken on “clear colour revolution characteristics.”

Drawing from the protest slogan “Liberate Hong Kong, revolution of our times” and incidents where the national emblem was defaced and national flag discarded, Zhang said that the violent protests now posed a serious threat to China’s sovereignty over Hong Kong as well as the city’s future.

The term “colour revolution” originally referred to movements in former Soviet countries in the 2000s that led to the overthrow of governments. It now often applied to similar revolutions in the Middle East and Africa.

Some experts accuse the US of having a clandestine role in many of these movements.

The fact that protesters are seen waving American flags only adds to the speculation of US involvement.

On August 8, after a local newspaper in Hong Kong published a photo showing protest leaders Joshua Wong and Nathan Law meeting with Julie Eadeh, political chief of the US Consulate, in a Hong Kong hotel, China accused the US of playing a “hidden hand” in the protests, and called on US consulate officials stationed in the city to clarify.

Pointing to her previous stations in political hot spots such as Baghdad, Mosul, and Beirut before her transfer to Taipei, Shanghai and Hong Kong, some Chinese State media pundits suggested Eadeh is a “subversion expert” or a CIA officer posing as a consular official.

The US strongly reacted to the accusation. During a news conference held in August 9 in Washington, US State Department spokeswoman Morgan Ortagus called Beijing a “thuggish regime” for endangering an American diplomat. Ortagus said the meeting between US diplomats and local political figures was done according to established US foreign service protocol.

But given that the US launched high-profile investigations over accusations of collusion after Russian diplomats met US politicians and lobbyists, Washington’s response was poorly received by Beijing.

China’s Office of the Commissioner of the Ministry of Foreign Affairs in Hong Kong immediately hit back, accusing Ortagus of “rogue logic” and hegemonic thinking, and warned the US to stop interfering with China’s internal affairs.

But legally, Beijing’s hands are tied. Without a national security law in place, neither treason nor spying is a crime in the city, leaving authorities no legal basis to launch investigations into alleged foreign meddling and collusion.

Beijing faces a more immediate dilemma: how to deal with the city’s unrest. According to the Basic Law, China can send troops to the city at the request of the Hong Kong government to “maintain public order and conduct disaster relief.”

But although China has not ruled out the possibility of intervention amid reports that China has amassed 12,000 paramilitary personnel in the neighbouring city of Shenzhen, sending troops to a global financial centre as the world watches is not a desirable choice.

As Hong Kong’s violent unrest appears to spiral out of control, it remains unclear how the crisis will end. But for many, whatever happens next, the trajectory of the city’s future has changed forever.