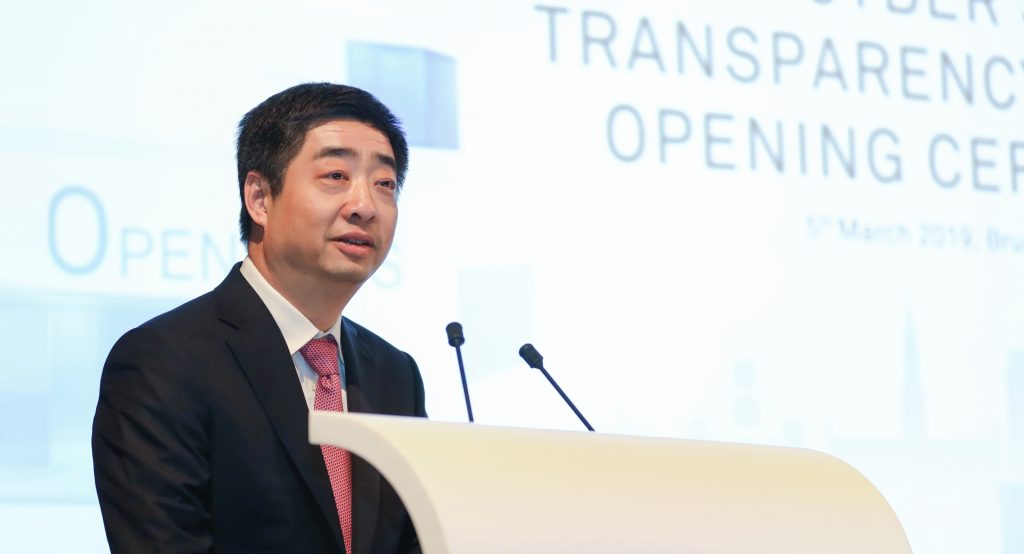 Huawei, the multinational tech giant, has unveiled a new cyber security centre in Brussels in a renewed effort to allay fears over using its equipment in 5G networks.

This follows a series of high profile statements from Western politicians voicing concerns about cyber security in allowing Huawei network equipment to be used in the next generation of mobile networks.

It marks a move for Huawei, the besieged telecom equipment manufacturer from Shenzhen, South China’s Guangdong Province, to shift from the defensive to the offensive.

The US government has banned the use of its equipment in American 5G telecom networks and is pressurising its allies to do the same over alleged security concerns. Australia and New Zealand have followed suit. But in the UK, following reports from the government-sponsored security centre claiming manageability of any security risks, senior executives from UK operators Vodafone and Three have voiced their support in allowing Huawei equipment in their 5G networks.

Now the leading information and communication technology giant has opened a new Cyber Security Transparency Centre in Brussels to further quell disquiet about the potential risks of using the Chinese provider. The opening was well attended by regulators, telecom carriers, enterprises and media. Representatives from the European Union, the GSMA, a trade body representing mobile network providers, and the World Economic
Forum spoke at the opening ceremony.

The centre will provide a test and verification facility in cyber security involving Huawei equipment, while showcasing the company’s expertise and practices, from strategies and supply chain to R & D and products and solutions.

Most importantly, Huawei hopes to build trust in cyber security from European regulators and carriers in their drive for the next generation of telecom infrastructure for an interconnected and smart world. This will allow visitors to experience cyber security with Huawei’s products and solutions in areas including 5G, the Internet of Things and cloud computing.

Opening the ceremony, Ken Hu, Huawei’s deputy chairman said, “Trust needs to be based on facts, facts must be verifiable, and verification must be based on common standards. We believe that this is an effective model to build trust for the digital era.”

New developments in cloud computing, artificial intelligence, and Software-Defined Everything (grouping all software services together for service users) are posing unprecedented challenges to the cyber security of ICT infrastructure. The lack of consensus on cyber security, technical standards, verification systems and legislative support further exacerbates these challenges.

Safeguarding cyber security is considered to be a responsibility held by all industry players and society as a whole. Growing security risks are significant threats to the future digital society.

To address these challenges, Huawei’s new Cyber Security Transparency Centre aims to offer government agencies, technical experts, industry associations and standards organisations a platform, where they can communicate and collaborate to balance out security and development in the digital era.

Huawei has been at pains to stress the company complies with local laws and regulation, in Europe or anywhere else in the world.

The centre will facilitate communication between Huawei and key stakeholders on cyber security strategies and privacy protection practices. Huawei will work with industry partners to explore and promote the development of security standards and verification mechanisms.

Hu said, “We fully understand cyber security concerns that people have in this digital world. I believe that good solutions to solve the issue start from mutual understanding, which is the purpose we set up the transparency centre here today. We welcome all regulators, standards organisations and customers to fully use this platform to collaborate more closely on security standards, verification mechanisms, and security technology innovation. Together, we can improve security across the entire value chain and help build trust through verification.”

“A prosperous Digital Europe requires an open and future-oriented cyber security environment. Europe has released the General Data Protection Regulation (GDPR), which is an open, transparent, and globally leading data and privacy protection standard. We believe that European regulators are on track to lead the international community in terms of cyber security standards and regulatory mechanisms. We commit to working more closely with all stakeholders in Europe, including regulators, carriers and standards organisations to build a system of trust.”

The UK government is debating on the issue and is about to make a decision on which provider is allowed on the list of suppliers for the 5G network infrastructure in the UK.