Links to the Past 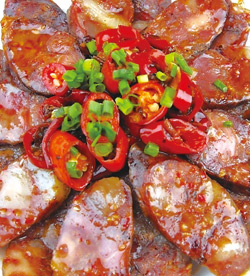 Chinese charcuterie is ubiquitous and tasty – but woefully unknown. That’s no overstatement: you may well ask – what exactly is a Chinese sausage?

It wasn’t that long ago that China was a land of scarcity, where frigid winters and the needling threat of famine prompted people to find ways to make their food last. Yet food preservation wasn’t such a simple business. It became so crucial to survival, especially in arid northern China, that villagers developed rituals surrounding food fermentation, pickling and – crucially for cold cuts – salting and smoking, which allowed them to keep meat in their diets, albeit in small quantities, virtually year-round.

From bucolic villages to sprawling cities, China’s markets have stalls stacked high with an endlessly variable selection of cured and smoked meats which change enormously from region to region. Familiar recipes are tweaked to fit the palates of individual areas, villages and even families, with seasonings adjusted to fit local appetites. Meats can range from fatty to lean, fork-tender to leather-hard (the latter requiring soaking, boiling or steaming before consumption). The only common feature is deliciousness.

The most common type of Chinese sausage known abroad is probably the southern Chinese variety, known by its Cantonese name of lap cheong. The thin, tough meat is easy to recognize for its white blotches of adipose, as well as its sweet flavor. Made from minced pork, the links are marinated, smoked and wind-dried outdoors for three days before being served sliced, diced or chopped into a mind-boggling array of dishes in which sausage is as much a flavor enhancer as a principal ingredient.

Travel into China’s agricultural heartlands and sausage is just as prominent. Charcuterie from Hunan and Sichuan provinces tend towards farmhouse wholesomeness, with most of the best examples cold-smoked after being marinated and air-dried to remove unwanted moisture in these humid climes. A tongue-sizzling amount of chili and numbing Sichuanese pepper further reinforce local predilections. Considering how these offerings are usually served in stir-fries or other equally potent spiced dishes, they pack a considerable punch.

Sausage took on a particular importance in the nomadic north and west of China, where herders relied on their animals for their livelihoods and the bulk of their nutrition. I found some excellent lamb sausage crafted by ethnic Hui butchers when I traveled through Qinghai. The peppery flavor was rich and strong, enhanced by the presence of curdled sheep’s blood and barley which gave the meat an almost haggis-like, grainy texture. These thin links, sold in lengthy coils at markets and served sliced and fried as a side dish, both honestly reflect and surpass the hardscrabble way of life on one of the country’s most barren, windswept plateaus.

Northeast China brings to the table a plump, savory cure known as “red sausage,” where East meets West. Back in 1909, émigré Lithuanians in a Russian-owned factory in Harbin, at the time a crossroads between Tsarist Russia and the Qing Empire, began pumping out sausages akin to what they were used to back home. While other Slavic dishes may have vanished from local dining tables, these meaty treats have remained a firm favorite with locals of all ethnic backgrounds.

Nor are sausages limited to the time-tested methods of preserving meat. In Yunnan, for instance, links packed with glutinous sticky rice are a common sight among minority-heavy regions, where they are traditionally a Chinese New Year treat. These deep purple sausages are further jazzed up with pigs blood and spices, and steamed or deep-fried in thin slices.

While the sausage remains a force to be reckoned with on restaurant menus, however, its place in the home is dwindling. For China’s rising middle class, turning their backs on generations of poverty, spending days laboring to preserve seasonal eats easily obtained at the local supermarket seems like folly. Sometimes, those attempting to preserve traditions even fall foul of the authorities. Late last year, farmers in Chongqing were blamed for worsening the city’s air pollution problem. Their crime? Smoking pork in anticipation of the Chinese New Year holiday.

Chinese charcuterie appears to endure, at least in comparison to other methods of preservation. Traditions regarding pickling and salting, once the only way to guarantee year-round vitamins prior to refrigeration, are simplifying or even dying out completely. Conversely, you can count on finding diced sausage in unexpected places, like Cantonese turnip cakes. On top of that, a new batch of boutique sausage stuffers has taken up business in major cities like Beijing and Shanghai. Even McDonalds introduced a new sandwich in 2013 in an attempt to stimulate flagging burger sales in China: two sausages slathered with mustard on top of the regular beef patties.

The presence of the sausage at the heart of many traditional Chinese dishes, it seems, ensures its survival.