State-owned enterprises (SOE) have always been one of the focal points of reform in transitional economies. This seems to be particularly true in China. As the concept of “structural reform on the supply side” becomes the norm, SOE reform stands at its core.

According to the SOE reform policies that were publicised in the second half of 2015, Chinese SOEs appear to have two options in the coming year. Those haunted by industrial overcapacity and debt will be acquired by others, or even go bust, so that their resources, land and capital can be set aside for more efficient players in the market. Most of the others will be restructured in some way, so that they can re-emerge as more efficient market players themselves. Private investors are welcome to become SOE shareholders or to enter the markets that were originally closed to them, such as oil and gas.

Zhang Wenkui, vice director-general and research fellow at the Enterprise Research Institute, Development Research Centre of the State Council, talks to China Report about how supply-side reform would be meaningless without substantial progress in SOE reform. The most important step in this regard, he says, would probably be the diversification of SOE ownership.

China Report: How important is SOE reform for structural supply- side reform?
Zhang Wenkui: SOE reform is one of the focusses of supply-side reform. Supply-side reform itself is all about the reform of enterprises. Private sector businesses are certainly part of this, as they also have to deal with problematic ‘zombie enterprises’ [sluggish companies on the brink of bankruptcy], strengthening management and improving technological skills. SOEs not only have these same problems, but also face an additional issue of how to become real market players. I believe supply-side reform will be nothing more than lip service if SOE reform does not take meaningful steps forward.

CR: Last September, the central government unveiled guidelines for SOE reform. Do you think these guidelines address these problems?
ZW: It is a fairly comprehensive blueprint. Contributions from relevant government agencies can all be found in there, including the ideas of mixed ownership, more stringent supervision and improving SOE dynamics. However, key points may get lost in such a holistic approach. There may be confusion in implementation.

For example, ownership reform has been identified as the way to go. However, the key question of how to avoid the loss of State-owned assets has yet to be answered. A recent policy paper stated that the next step is to make rules to prevent such loss, meaning that the red line [dictating what is and isn’t allowed] has yet to be drawn. This wait-and-see attitude will prevail until that red line is clear, because nobody wants to take the risk of crossing it.

CR: What do you think is the most important thing to do right now for SOE reform?
ZW: SOE reform itself is nothing new. Nearly everything that has been inscribed in today’s official decisions has been tried or brought up over the past 30-plus years. According to what I’ve observed, there is little contention over the direction of the reform, which is to make SOEs market-oriented, except those in a few special sectors [such as the defence industry].

Then the question becomes: What is the path towards that goal? Our experiences over the past 30 years have told us that becoming market-oriented is not possible if we continue to get tangled up in the issue of who should be in charge of the daily operations of these companies. One trial that tested different management structures brought in a board of directors [who were supposed to be more independent in making major business decisions, such as choosing managers and investment projects]. Basically, it failed. If we continue to go down the road of focussing on who is in control, the most likely result will be more eyes watching SOEs but fewer able and motivated hands at work. 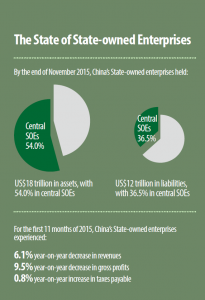 Ownership, rather than control, is the area where change is most needed. The so-called “mixed ownership” structure, with the participation of private capital, is the right way to go. It is a moderate change acceptable to most stakeholders. Indeed, this idea was enshrined in the decision made at the Third Plenary Session of the 18th Communist Party of China Central Committee in November 2013, which set the roadmap for all reform to move towards a full-fledged market economy.

CR: The SOE reform guidelines issued in September include an initiative to establish State-owned investment holding companies that focus on managing portfolios, not specific assets. This model is often compared to the Singaporean company Temasek, which manages the assets of the city-state’s government. However, the Temasek model is widely regarded as not applicable in China. Why not?
ZW: There are preconditions for the Temasek model to work. Temasek is basically a wealth fund that makes independent business decisions based on its own business judgement, even when the decisions involve selling an SOE or State-owned shares. This is not possible in China now.

However, there are already examples [in China] similar to Temasek, though on a much smaller scale. Parent companies of a few central SOE giants, like China Resources, China Poly Group Corporation and China National Cereals, Oils and Foodstuffs Corporation, just serve as headquarters for management. Business operations and assets are actually held by their subsidiaries, which in many cases are listed companies. These parent companies are Temasek-like within their industries.

This shows that the Temasek model can work properly in China as long as the precondition of independent operation is met. If the SOEs are regarded as market entities, such a precondition will be made possible through reform. If they are regarded as political entities, then the opposite will happen, and we’ll continue to tighten control of SOE business operations.

CR: What are the areas where breakthroughs are most likely in SOE reform in 2016?
ZW: According to the State Council’s blueprint, which was unveiled right after the September guidelines on SOE reform, trial projects on mixed ownership will launch in the power, oil, natural gas, railway, aviation, telecommunications and defence industries. I personally expect breakthroughs in mixed ownership to emerge from these trials.

Besides altering ownership at the parent-company level of some central SOEs in these areas, restructuring could probably also take place in other aspects of SOEs, including business, governance structure and debts. All of these are necessary to transform central SOEs into strong players that can compete globally.

China Report | by Min Jie and Li Jia Old and New Growth Engine
A hybrid engine began to drive China’s economy in 2015. The conventional part, fuelled by labour, land and capital, is losing steam; the new part, fuelled by innovation and entrepreneurship, is developing. This […]