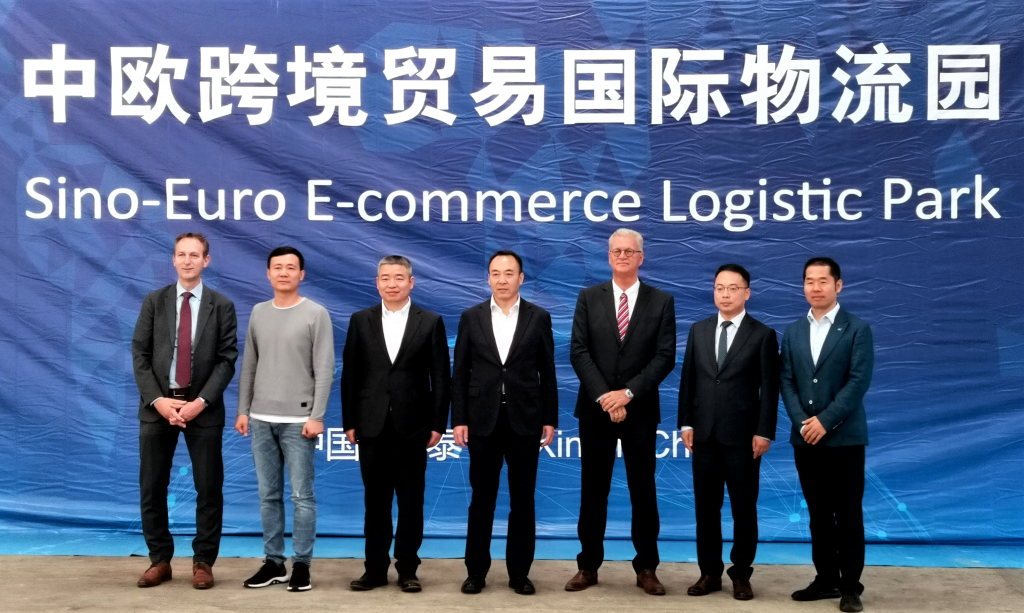 A new logistics park in Venlo, the Netherland, has started operation, the first in Western Europe to pre-clear goods for China customs.

The Sino-Europe Ecommerce Logistics Park at the southeastern Dutch city of Venlo symbolises a new beginning in bilateral trade transactions in e-commerce, with the capability to do customs clearance for goods before arriving at Chinese borders.

On the 20th September 2019, Chinese and Dutch dignitories witnessed the formal launch of the logistics park, opening a multi-mode e-commerce distribution channel linking Europe with vast orders from Chinese consumers.

Zhang Guosheng, the Commercial Counsellor of the Chinese Embassy in the Netherlands, Liu Dianxun, Director General of China Investment Promotion Agency (CIPA), Ministry of Commerce, and Xu Dansong, Representative of CIPA in Europe, as well as Bert de Wit, Business Development Director of the Investment Office of Limburg Province (LIOf), and Peter Pardoel, Chairman of the freight logistics group Cabooter attended the ceremony.

Delegates watched STO Express operators scanning and labelling hundreds of delivery boxes passing through the smart check-in machine, fulfilling orders placed by Chinese consumers on the cross-border e-commerce platforms, and readying them for the long haul flight to China, where they will be double checked at supervised customs stations in Xintai, Shangdong Province, and delivered to customers within four working days.

Praising the work of the Logistics Park, Liu Dianxun said the new hub is attracting high tech distributors and taking full advantage of Venlo’s unique geographical location to feed into rail, road, air and sea routes. As big Chinese parcel carriers like STO Express, YTO Express, SF Express, and Deppon as well as China Eastern and China Southern airlines have signed up with the Logistics Park and China COSCO Shipping is also looking into it, he encouraged them to pay attention to cultural as well as technical exchanges with European counterparts.

Yuan Chunshan, Chairman of the e-commerce Logistics Park told his guests that the park is set to provide three lines of services, in product supply chain, distribution chain, and logistics finance. Pre-clearing customs for e-commerce is the key, and, in collaboration with Tradeany and other platforms, the Venlo hub would open the door for Chinese and European brands and traders to reach online shoppers in each other’s territories.

In recent years, Chinese consumers have pushed up e-commerce at home and abroad, especially for high quality goods and services from Europe. With an estimated 850 million online shoppers in China, the size of e-commerce there is expected to reach £576 billion (€658bn, $723bn) in 2019.

Driven by Chinese consumption upgrade and the ongoing trade war across the Pacific, trade and commerce with Europe have taken on greater significance. Following the running of China Railway Express, a few logistics centres have been set up in Europe in recent years, for example, the EU-China Logistics at Wallonia, Belgium, and the Central European Trade and Logistics Cooperation Zone in Budapest, Hungary (also sponsored by Shandong Province). But they haven’t got the capacity yet for trusted customs clearance for the China market.

The Chinese company that has built the Venlo logistics park – Shangdong Guohui International Supply Chain Management Ltd – has spotted the changing consumer behaviour and the potential for China Europe e-commerce. SD Guohui is managing the park, working with quite a few platforms, and providing a set of services in the supply chain.

By adopting the concept of pre-clearance as promulgated by Transquare, the park is equipped with the whole set of systems and processes as required by China’s General Administration of Customs to reduce the need for customs inspection on arrival.

Bert Roona from LIOf hoped, as the camel bells that rang through the ancient silk road started the the exchanges between the East and West, today’s Logistics Park would enable tens of thousands of European and Chinese SMEs to cooperate and prosper together in e-commerce.

For Yuan Chunshan, the Chairman of both the Logistics Park and Shandong Guohui, he was delighted that the launch was in good time to mark the 70th anniversary of the People’s Republic.