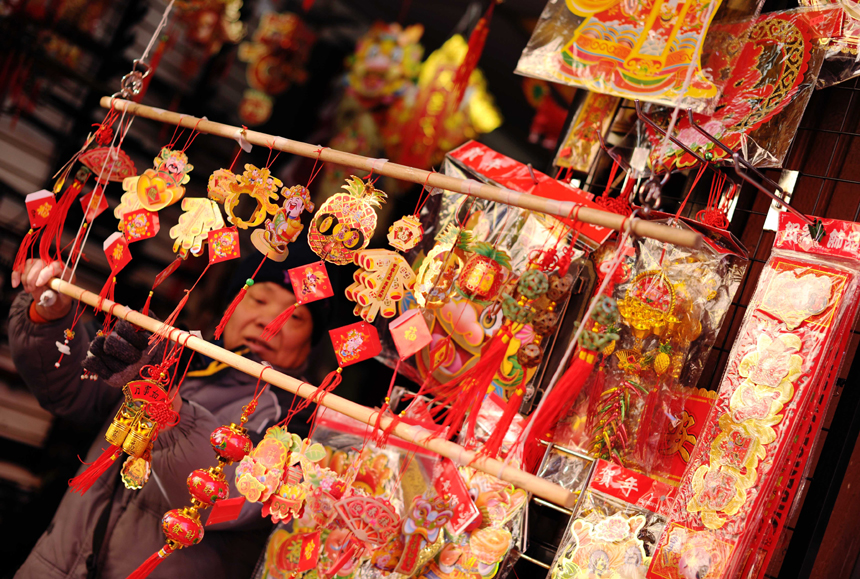 Of the 18 deity halls in Beijing’s White Cloud Temple, the only one requiring a yellow sash to cordon off its long line of supplicants is that of the god of wealth. The sizeable figurine looks down solemnly at me. His golden robes and black, isosceles triangle of a beard only add to his austere demeanour.

A short-haired woman arrives at the front of the line. Her puffy down jacket has the word “LUCK” stamped on the back. She shakes out three sticks of incense from a rectangular packet and holds them ramrod straight between clasped hands before bowing and placing them on the table in front of her, an offering to ensure her financial wellbeing in the Year of the Monkey.

It’s February 16, 2016, a good nine days into the lunar new year, but White Cloud Temple’s temple fair is still in full swing. This annual event is just one of the capital’s many such celebrations – for the first week of the lunar year, these explosions of red and yellow pop up all around the country, with market vendors, dance troupes and sweets-eating children typically weaving in and out of the crowd.

The tradition of temple fairs reaches back to the Wei Dynasty (220-265), according to The Market and Temple Fairs of Rural China: Red Fire, by University of Southern California academic Gene Cooper. At that time, the seeds of Buddhism and Taoism had already been sown and organised religion had started to sprout. The first events consisted of early practitioners leading religious processions throughout local towns to draw out more potential followers. The relative political stability of the Sui (589-618) and Tang (618-907) dynasties left more room for spirituality and culture to flourish, so temple fairs expanded and added a market to the festivities, allowing a commercial aspect to branch off from this fundamentally religious event. Singing and dancing were stirred into temple fair repertoires during the Song Dynasty (960-1279). Vocalists began performing operas to entertain the deities. During the Ming Dynasty (1368-1644), temple fairs started to take a shape recognisable as the full-blown affairs they are today.

White Cloud Temple
Beijingers have myriad options when choosing a temple fair to attend come Chinese New Year. The one held at the White Cloud Temple, a Taoist structure originally built about 1,300 years ago, is perhaps the most spiritual. Bluish clouds of incense smoke cover the temple grounds in a translucent mystique. Cheery Chinese melodies chirp from loudspeakers.

Four-character benedictions like “May you have all that you desire,” “Wishing you good health” and “May you have a prosperous New Year” bless fairgoers from 10-feet-long golden banners. Familial clumps migrate from one deity hall to another, small children in hand, as family members take turns paying their respects to the different gods. Believers lay sticks of incense at the feet of the three Kings of Medicine to ward off illness. They bow their heads at the powerful Jade Emperor’s shrine, which followers have adorned with auspicious fruits and flowers.

A metallic rain of clinks and clangs rings out from below the Wofeng Bridge in the temple’s central courtyard. Hanging underneath the small bridge, about 12 feet from the surrounding stone balustrade, is a fist-sized bronze bell suspended in the square opening of a massive replica of an ancient Chinese coin. For 10 yuan (US$1.54), visitors can buy a stack of 50 circular tokens to fling at the bell. Managing to make its bronze curves sing signals the successful thrower will have good fortune in the Year of the Monkey. Apart from the token vendors and a pair of indoor stalls selling Taoist prayer beads and deity figurines, this spiritual celebration is otherwise unmarked by the spirit of commerce.

Dongyue Temple
This small Taoist temple, conspicuously situated in the midst of one of Beijing’s busiest commercial districts, doubles as the site for the Beijing Folklore Museum, so event attendees not only pay their respects to Taoist deities, they also learn about their Chinese zodiac signs from the museum’s Chinese-language exhibits.

I first walk onto temple grounds through a red-drenched pathway called the Road of Fortune. Flanking the walkway are two railings heavy with bunches of hanging red tablets upon which fair goers have written their wishes and desires. Different Chinese New Year sayings mark each wooden block, which are purchasable for 30 yuan (US$4.60) inside the temple. More expressions of hope – “I hope I test into my desired secondary school” and “I wish for good health for my entire family” – are inked over a dozen large red cylinders of fabric lined up in an inner courtyard. Visitors can also ensure their financial fortune for the year by tossing metal tokens at the Money Eye booths, a slightly easier version of the Wofeng Bridge toss.

Along the periphery of the temple, which was originally constructed in the 14th century, are 76 grottoes, each one displaying a different department within the spiritual hierarchy known as the Taoist Pantheon. Each chamber holds huge figurines related to that particular department’s function, be it the Longevity Department (with its many grey-haired inhabitants) or the Department for Implementing 15 Kinds of Violent Death (with its decapitated soldier). The faithful slip bills into the donation boxes at the front of each chamber to show their respect to each part of the Taoist underworld.

Ditan Park
“Whatever you do, do not come,” the middle- aged woman behind me says into her rose gold iPhone. I don’t need to strain to hear her conversation. We are pressed together in the middle of a slow-moving mass of thousands of Ditan fairgoers, two extra crayons stuffed into a Crayola box. “It’s people mountain, people sea here!” she exclaims, using a four-character Chinese idiom to describe crowds so large they begin to resemble geological features.

Ask any Beijinger about temple fairs and the first one he or she will bring up is Ditan’s. I’m visiting on the fifth day of the lunar calendar, the last day the Ditan temple fair opens its doors. Procrastinating fairgoers flood the park to savour traditional snacks, buy monkeythemed handicrafts and watch the graceful flow of water-sleeve dancers at the city’s largest and most famous temple fair.

Yet a set of red booths labelled “Traditional Handmade Crafts” offers nothing but plastic Chinese masks, dime-a-dozen plush monkeys and factory-made ocarinas. A row of stands marked “30 yuan [US$4.60] area” and “60 yuan [US$9.20] area” bear merchandise from recent blockbusters Monster Hunt and Kung Fu Panda 3. Plastic, bright-pink cherry blossoms attempt to dress up a few sparse, winter-bare trees. After tired-looking water-sleeve dancers finish their afternoon number, only three people clap among an audience of hundreds. An unsupervised toddler defecates nearby.

The original commercial arm of temple fairs birthed in the Sui and Tang dynasties has grown so strong at Ditan that it’s strangled everything else. Not only can kids buy Minionsfrosted cupcakes while staring at the advertisements on booths’ outer walls, they can play carnival games with the hope of winning a red monkey toy or a SpongeBob SquarePants figurine. The actual temple area is the least crowded section of the park.

When I return home and begin doing research for this story, I type the characters for “temple fair” into the Chinese search engine Baidu. The first suggested search result? “What can I sell at temple fairs to make money?”