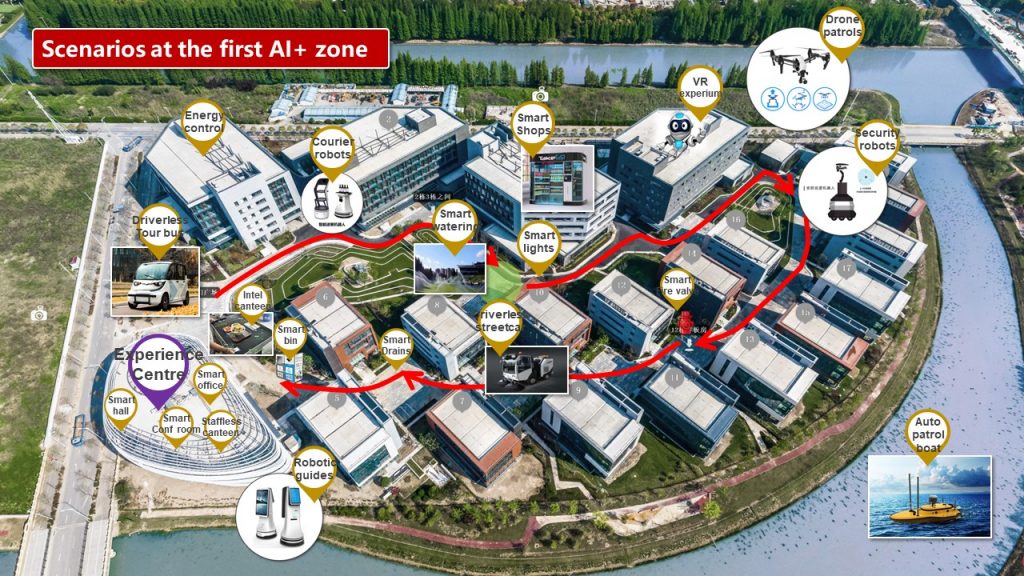 Just a year ago, this natural peninsula located at the heart of the Zhangjiang Science City, a high-end zone located in Shanghai’s Pudong New Area, was just a humble place of swaying reeds and wild flowers. Now, it has emerged as a burgeoning test bed for China’s artificial intelligence (AI) industry: an area with 20 office buildings, equipped with Alpheus smart recycling bins, Infineon smart road lamps and Slamtec security robots, all busy doing their jobs autonomously. But for its planners, this is only the beginning.

In April 2018, Zhangjiang Science City released its blueprint to build an AI island that concentrates digital projects in an array of fields, including AI, big data, cloud computing, blockchain, virtual reality (VR) and augmented reality (AR), and then apply these technologies across the region.

The move comes as part of Zhangjiang’s efforts to become an “Intelligence Valley” for the high-tech zone which has already earned its reputations as China’s “Medicine Valley” and Shanghai’s “Silicon Valley.”

With AI companies pouring in over the past year, a multi-layered AI ecosystem is taking shape, becoming a new driver for the industrial upgrade of Zhangjiang Science City, as well as that of the wider Pudong New Area.

According to Yuan Tao, Chairman of the Zhangjiang Group, the term “AIsland” has a double meaning: on the one hand, it is a core area that brings together top AI tech firms, and on the other, the whole peninsula will become a place where there is wide application of AI technologies.

“The island provides Zhangjiang-based AI firms with rich and real application scenarios, where they can put their products into immediate application. The management of the island is based on their products,” said Yuan Tao, who believes “the future is now.”

“Our AI firms are involved in smart parking, smart irrigation, smart air inspection and smart pest control… All these are hidden from view in the AIsland’s management. What if you want to see them? Just put on a pair of AR glasses, and all the smart information will come up.”

This is not just a flashy showcase of out-of-touch technologies. On the contrary, AIsland offers AI companies real application scenarios, something that is desperately needed across the entire industry.

Known as Shanghai’s “Silicon Valley,” Zhangjiang has attracted a host of technologically advanced AI companies. Data shows that more than a hundred AI firms, covering almost every single segment of the AI industrial chain, have taken root in the science city, accounting for a quarter of Shanghai’s AI industry.

AI technology has been an attractive bonanza for waves of investment, yet finding the right application scenario has proved difficult. It is a vital step in commercialising lab-based research, and in being able to indicate the possible direction of application of AI technologies and their potential viability, which will further bring in the market and orders.

“Scenarios are in robust demand,” said Gu Jie, CEO of Fourier Intelligence, a producer of exoskeletons and rehabilitation robotic products.

“Having real application scenarios is key to an AI company’s survival against diverse competition, and algorithms and technologies are able to improve the efficiency of existing scenarios and drive down costs.”

But for AI technologies, the application scenarios must be real and effective, as AI products need to learn and mature in real scenarios. As a platform company that specialises in connecting companies with application scenarios, their solution for the AI industry is a bold attempt to build the AI Island to “create scenarios.”

In early 2019, IBM became the first “resident” to settle on AIsland, followed by Insider Lab of Microsoft’s AI&IoT, Alibaba Shanghai R&D Centre, Infineon Technologies (Greater China), as well as Cloudwalk Technology, a leader in image recognition. AIsland has become a hub for global leaders and emerging unicorns. Within a year, 90 percent of the office space has already been taken.

AIsland’s huge popularity came as a big relief for Yuan Tao: “The direction proves right. When we were planning the AI island, the biggest worry was failing to identify the right tech frontier and to be met with a muted response from the market.”

“After many years of development, Zhangjiang’s digital economy has transformed from integrated circuit production to a comprehensive cluster covering terminals, AI and big data,” said Tang Shiqing, director of Pudong New Area’s Technology and Economy Commission. “AIsland is a milestone. It marks a big step forward for Zhangjiang.”

Yuan Tao believes that building AIsland can solve the pain points of the industry, and it is a necessary step in Zhangjiang’s full-swing toward development of AI.

“AI is the future trend. Zhangjiang needs to stand at the tech frontier if it is to become a high-tech town at the forefront of domestic industries,” said Yuan Tao.

With a solid industrial foundation and a huge pool of high-calibre staff with a global vision, Zhangjiang has become an even more attractive destination for leading companies and high-end skilled professionals.

“We chose Zhangjiang, not just because of its rich application scenarios, but also because of our intent to attract high-end professionals. Zhangjiang has a reputation for its talented high-tech personnel. We didn’t think twice when we decided to move here,” said Zhang Li, Vice President of Cloudwalk Technology. In the meantime, Zhang also admitted that there is still a lack of skilled engineers to develop the underlying technology in the AI sector.

That is however a common problem on the global AI scene. In response to this pressing need, Zhangjiang is putting its weight behind building a national science centre, as part of its effort to address the talent shortage.

“A national science centre will help gather a host of top-notch research talents to produce preliminary achievements, which in turn will further attract more high-end companies and talented personnel from across the world to produce excellent research papers and original innovations. That will create a virtuous cycle within the industry’s ecosystem,” said Professor He Bin with the School of Electronic and Information Engineering, Tongji University.

Located at the heart of Zhangjiang Science City, AIsland is also in the centre of the wider Pudong New Area, putting it at the forefront of Pudong’s drive to build three layers of tech ecosystems.

The first layer is an AI-centered smart cluster powered by AIsland, which looks to attract the most technologically advanced AI companies with the most feasible solutions in their own sub-fields.

Yuan Tao told China Report that all the companies on AIsland are participants in the ecosystem with potential to cooperate and unleash the potential of AI, making the sector an engine to power industries in Zhangjiang Science City and the wider Pudong New Area.

“Based on AIsland, Zhangjiang’s central district will attract an array of industries, including artificial intelligence, big data, cloud computing, blockchain, VR and AR, and form a nexus for an AI-related hub. That will help extend the technologies and their applications throughout Zhangjiang Science City, accelerating AI integration with other industries,” said Wu Qiang, director of Zhangjiang Science City’s Construction and Administration Office.

With a vertical AI ecosystem in place, AI companies have started cooperating with traditional industries, forming the second ecosystem layer based on inter-industry linkages in Zhangjiang.

“AI is a method, but its real value lies in empowering other industries. By taking advantage of Zhangjiang and Pudong New Area’s industrial edge, we plan to launch a series of industry eco-spaces, led by leading companies, with the participation of universities, research institutions, small-and-medium-sized companies, and thus build a complete collaboration chain,” said Yuan Tao.

“It will offer industry giants fresh blood and upgrade traditional companies with smart technologies. It can solve the problem of isolated development on traditional incubator platforms. AI companies will find application scenarios here and accelerate their push into niche markets.”

The vertical innovation model demonstrated on AIsland forms a central part in the Industry Plan 2019 for Shanghai Pudong New Area in fostering the development of key sectors such as processors, new bio-medicals, intelligent manufacturing, and driverless vehicles.

As highlighted by Weng Zuliang, the Party chief for Pudong New Area, there’s an established clustering for AI and informatics, which is pulling in multinational regional headquarters. The foundation is ready for further development of the Free Trade Zone and Innovation Hub in East Shanghai.