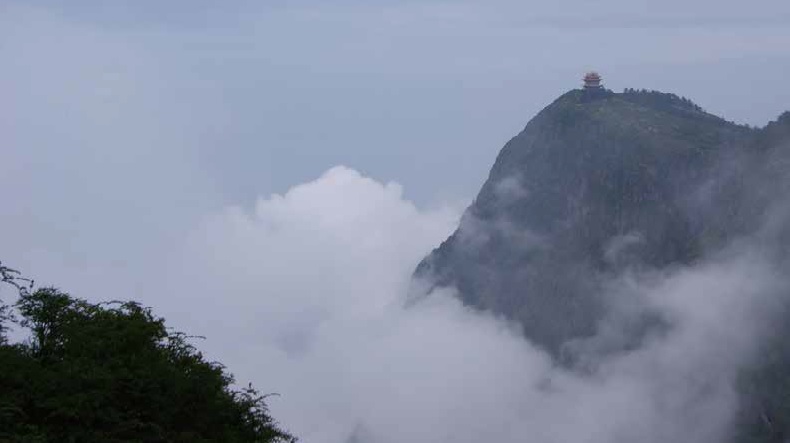 For many, Chengdu is a must-see destination for one reason: pandas.

I can confirm that they are adorable, especially when rolling around in the short gaps between bamboo binges and naps. But if you have a few days at hand there, venture slightly further afield to two bastions of Buddhism, namely, Emeishan, a UNESCO World Heritage Site since 1996, and the nearby Leshan Giant Buddha Scenic Area.

We had four days to play with, as our night train from Xi’an drew into Chengdu station.

After compulsory visits to the Panda Research Centre, as well as to the beautiful Jinli Old Street where you can find China’s famous “ear ticklers” (people who will clean out your ears with terrifying equipment), we made our way to Emeishan town.

There we spent the night, rising early the next morning to catch the first mountain transfer bus at 6am amid a crowd of serious-looking, polyester-clad hikers.

On the bus, we were handed plastic bags, and we soon understood why as we began the windy ascent towards the mountain base, and a soft chorus of retching erupted around us.

When we finally arrived, we joined a mass of hikers on the stone staircase leading up through the lush forest, on a path lined with stalls selling Buddhist memorabilia and steamed buns.

As with most mountains in China, the whole way to the peak consists of thousands upon thousands of stone steps, so we decided to escape the crush and head to the cable car.

This dropped us less than a kilometre from Jinding, or the “Golden Summit,” which sits at 3,077m above sea level. 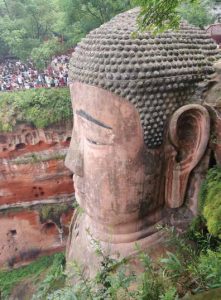 One of the four sacred mountains of Buddhism, Emeishan is said to be the place of enlightenment of the bodhisattva Samantabhadra, who is commemorated by an enormous golden statue here at the peak.

Unfortunately, the deep spirituality of the location somewhat eluded us, largely because of the substantial construction project underway at the peak.

It looked as though they were building another one of the new “ancient temples” that you can spot around the place, mixed in among the genuine articles.

I was also troubled by the stream of exhausted manual workers, most of them older men and women, struggling up the mountain with sacks of concrete and huge coils of steel cable, their backs stooped low under the weight of their load.

The contrast between these people and the well-dressed “pilgrims,” wielding selfie sticks and iPhones, was brutally ironic.

All in all, the “Golden Summit” was slightly underwhelming spiritually and visually speaking. We hoped that the Wanfu Summit, which could be seen shrouded in mist in the distance and which, at 3,099m, is the highest peak of the mountain, would be more impressive.

Undeterred by warnings that the peak had been closed and was now very hard to access, we headed off on a search which led us through narrow, litter-strewn alleys to an abandoned monorail station. Formerly the gateway to the peak, its windows were smashed, the wooden platform splintering and the yellowing train within it lay dormant.

Given the circumstances, the solid pathway offered by the monorail track was too tempting, and so, up we climbed, making our way along the narrow walkway which wound its way through the air above thick stretches of bamboo and through misty pine forests.

We walked for around 2km, at times over 10-metre drops, focusing on our balance.

We did pass a few people, other hikers determined to reach the peak, although they were walking along a muddy path almost totally concealed by bamboo and overgrowth. It is, of course, the safer, more sensible route, but it doesn’t offer quite the same thrill or views.

Having said that, the monorail route does at least feel like a real hike, unlike the usual endless flights of stairs. At the end of the track, we disembarked on a mossy, rotting platform, and made our way through the mist, up to the small temple which crowns the peak. The visibility was almost nil, but the thrill of the journey there was amazing.

Back at the Golden Summit, we took the stairs back down the mountain, taking the best part of two hours.

Though pretty jarring on the knees, I have no doubt that it was more enjoyable than the ascent would have been, and one of the two is necessary if you want to visit the numerous Ming and Qing dynasty temples along the way. Many of these are breath-taking, built to fit in with the natural geography of the mountainside.

They are also said to be the favourite haunts of the infamous over-fed monkey hordes that inhabit the mountain, although sadly we did not see even the fleeting shadow of a monkey during our travels.

As we neared the base of the mountain, we passed a group of worshippers who were stopping to kowtow on each step as they went up.

I admired their springy-stepped cheerfulness and devotion, wondering at the back of my mind how long it would take them to reach the top.

We were back in town by 3pm, which for those still hungry for Buddhist culture, leaves just enough time for a quick visit to the giant Buddha at Leshan, a short train ride in the direction of Chengdu.

Built in the Tang dynasty (618 – 907), the stone statue sits nestled on the mountainside at an impressive 71 metres tall, the waters of three rivers flowing past its feet. In my view, the main not-to-miss activity there is a boat trip to the Buddha, which offers exceptional views of the entire statue minus the crowds, which are often considerable next to the statue itself.

Having said that, it was spectacular to stand up on the cliff by the head of the statue, fully taking in its scale and thinking about the work that must have gone into creating it over 1,000 years ago.

Although on this occasion we were not able to attain total enlightenment, we left thoroughly impressed by what we had seen. I hope to return someday to catch the sunrise over Emeishan’s famous cloud sea.