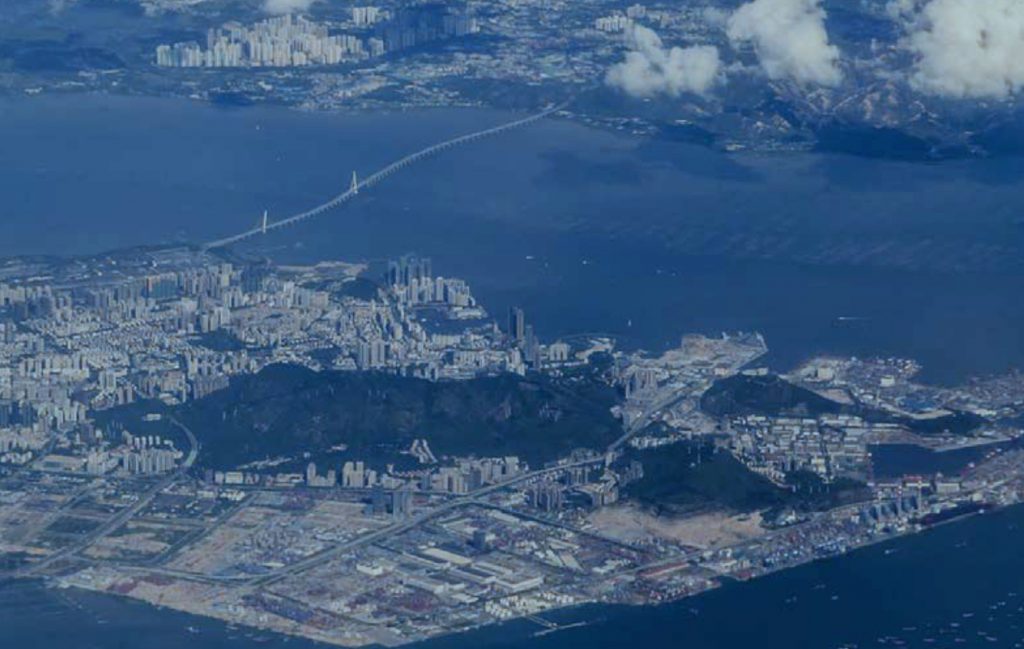 In 1994, Wu Jiawei, then president of the Hong Kong University of Science and Technology, proposed the concept of a Hong Kong Bay Area, inspired by his fond memories of San Francisco in the US.

Back in 1983, he became the president of San Francisco State University and lived in the city for five years, seeing the region’s robust economy bolstered by the bay area.

He did not anticipate that 23 years later his concept would be added to the government work report, becoming a piece of regional strategic planning at the national level.

National Strategy
The Greater Bay Area is not an unfamiliar term for the government, business or academia. It is an updated version of previous regional development initiatives, such as the Pearl River Delta and the Pan-Pearl River Delta.

From academic debates and local government planning to the proposal of the national strategy, its overall remit transformed from the construction of simply a cluster of cities to a national bay area.

Tan Gang, vice president of the Shenzhen Party School, had a clear explanation of how a local planning item was finally put on the national agenda.

“It came true thanks to the efforts of three sides – academic research, proposals by the government and feedback from the public,” he told China Report.

Bay Success
The concept is based on the successes of well-known bay areas in New York, San Francisco and Tokyo. It is generally accepted that urban development in recent years is closely related to the development of bay areas.

According to statistics from the World Bank, 60 percent of the global aggregate economic volume was concentrated in the world’s estuary areas.

The aggregate economies of New York, San Francisco and Tokyo respectively account for 7.8 and 4.5 percent of the US economy and 43.7 percent of the Japanese economy.

The Tokyo Bay Area has the most sophisticated manufacturing enterprises in Japan. Bay area economies have become an important engine for both economic growth and technological innovation.

Hong Kong’s Greater Bay Area covers less than one percent of the country’s land area and accounted for less than five percent of the total population, generating an economic volume of 1.4 trillion US dollars by the end of 2016.

Wang Fuqiang, head of the Industrial Planning Department at the China Centre for International Economic Exchanges, believes that the Greater Bay Area provides a solid and complete infrastructure base on which to construct the international bay area and cluster of cities, in terms of economic scale, proportion of outbound economy, industry, urban competitiveness and the level of regional integration.

“The Greater Bay Area is operated with Chinese characteristics in accordance with the principle of ‘One Country, Two Systems,’ [the name of the system for governing the Chinese mainland and Hong Kong] home to three free trade zones and three currencies [Chinese yuan, Hong Kong dollar, Macau pataca].

Under such circumstances, it is primarily a cooperation plan,” Wang told China Report.

Wang added that cities in the Greater Bay Area mainly speak Cantonese, and have a similar cultural background and identity.

What’s more, he added, the area has distinct advantages in that both Hong Kong and Macau boast a unique international business environment, mature marketing networks, a developed service capacity, diversified culture and a strong capacity to integrate with the global economy.

On the other hand, cities in Guangdong Province have advanced manufacturing bases, massive domestic market demand, a rich labour pool and the low-cost advantage.

The diversified and complementary traits of the different systems and cities will boost cooperation in the bay area, and Hong Kong will play its role as storefront and intermediary, helping domestic enterprises to head abroad and enhance their internationalisation.

Wang Fuqiang told our reporter that the Greater Bay Area is distinctively different from the greater Beijing-Tianjin-Hebei region. “Coordinated development across the world is largely advanced within a country or between two countries.

But it never existed within one country but under two systems and with three different customs areas,” he said.

“The biggest challenge is the two systems and it remains a big problem to coordinate because the economic systems and governance structure differ in the Greater Bay Area.”

Wang said that over the years, cities on the Chinese mainland have become more willing to forge closer economic ties with Hong Kong, adding that Hong Kong is sometimes unwilling to talk directly with cities in the Pearl Delta Region and Guangdong Province, while it is willing to communicate with the central government directly.

“Hong Kong thinks that it represents a unique system and with such a way of thinking, coordinating with mainland partners remains a challenge,” he said. 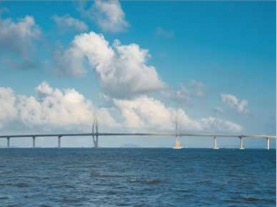 The Zhuhai section of the Hong Kong-Zhuhai-Macau Bridge

According to Guo Wanda, executive vice president of the China Development Institute, a mainland think tank, the concept of the Greater Bay Area has been discussed for many years.

It was added to the government work report this year largely because of the 20th anniversary of the transfer of sovereignty over Hong Kong from the United Kingdom to China.

“The Greater Bay Area initiative was proposed to boost the local economy and most importantly to maintain prosperity and stability in Hong Kong and Macau and bolster coordination and cooperation in the area,” he told China Report.

“The Greater Bay Area is an important platform for practising One Country, Two Systems, which is the biggest differentiator between it and other city clusters in China.

“Many places across the country are busy establishing free-trade zones. Hong Kong and Macau champion free trade and it would be a waste if we do not make full use of these mature platforms.

Another motivation to initiate the Greater Bay Area is to solve the problems of Hong Kong and Macau themselves,” he said.

Hong Kong is fundamentally an urban economy with a population of seven million and area of roughly 1,000 square kilometres.

Wang Fuqiang told our reporter that over the past 20 years since Hong Kong was returned to China, the central government in Beijing has unveiled a package of policies to boost Hong Kong’s economy and maintain social stability, but the effects have been limited.

He said that Hong Kong has maintained only relatively low economic growth in recent years, and it is restrained by its geographic barriers, the ageing population and widening income gap as well as the low recognition of the mainland by the general public, which was even lower than in 1997.

By 2016, however, it had shrunk as a proportion of 2.77 percent, showing the weakening position of the region.

“Over the years, it is Guangdong Province that has been more willing to cooperate with Hong Kong, but recently their roles have somewhat switched,” Wang told China Report.

Jeffrey Lam, a member of the Legislative Council (LegCo) of Hong Kong, was one of the visiting members and told China Report that they visited all the cities in the west of the Pearl River Delta, and hopes that these western cities will catch up with cities in eastern areas soon.

“It’s a real hindrance for Hong Kong to be restrained by the lack of free movement of people, logistics and cash ow. If the Greater Bay Area is established, it will be a boon for Hong Kong.

I think it’s a seat reserved for Hong Kong by the central government,” said Lam. “The Belt and Road initiative is a long-term national strategy involving more than 60 countries and its effects will take years to surface for some countries. e impact of the Greater Bay Area on Hong Kong is imminent.”

Compared with the Xiongan New Area, a planned special economic zone southwest of Beijing, Wang Fuqiang said the construction of the Greater Bay Area represents a new horizon for exploration. The Xiongan New Area is located inland, where the market economy is weak and interest groups have yet to emerge and where the cost of reform is low.

It is easy to develop the region quickly through heavy and fast investment. e Greater Bay Area, however, represents modern China where the market economy dominates, constituting a new experiment to seek the new driving forces for further development.

“The prosperity of Hong Kong and Macau has been heavily dependent on the support and preferential policies of the central government. Their economies need to be quickly put on the path of endogenous growth driven by innovation and industrial chain integration,” Wang said.

Challenges Ahead
Many experts interviewed by China Report argued that in the Greater Bay Area, the Two Systems are the two sides of the same coin and both sides face the same problems of customs clearance, immigration and quarantine inspection, requiring deepening integration and a new phase of coordinated development.

Guo Wanda told our reporter that many seminars and conferences were held in Hong Kong in the run-up to the 20th anniversary of its handover to China and he had to commute regularly between Hong Kong and the Chinese mainland, but it remains very inconvenient for the general public to clear customs.

Official statistics showed that each year, over 200 million people entered Hong Kong through customs in Shenzhen, which means 650,000 people cross the border on average every day.

It is expected that the volume will reach more than 1 million people by 2027. Addressing the needs of the growing numbers crossing the border will be a challenge.

Guo Wanda recommended an integration experiment by first cancelling the telephone roaming charges between the cities in the Greater Bay Area.

What’s more, he said, Hong Kong and Macau residents who work and live in mainland cities should be entitled to the same treatment as locals, including taxation, education, medical care, housing purchase rights and even the right to sit civil service exams.

He said many problems stem not from the law but from executive power, poor administration and human factors.

And the key to addressing the problems lies in deepening the coordination between the central government and local places and breaking the monopolies of different departments, to make the lives of the general public easier.

“Countries within the European Union have easy access to each other and it remains a question as to whether this mode could be practised under One Country, Two Systems. The good news is that research into this is underway,” Guo said.

“The biggest challenge is how to give full use of the advantage of One Country to address the problems of Two Systems. Another is how to coordinate and plan when different systems and laws are involved.”

Wang likes to divide the cooperation between Hong Kong, Macau and Guangdong Province into four periods. From the early 1980s when the Shenzhen Special Economic Zone was established, cross-border processing and trade broke ground.

In 2003, the Closer Economic Partnership Arrangement was signed, facilitating trade and investment for the economic cooperation of Hong Kong and the mainland.

In 2015, the Guangdong Free-Trade Zone came into effect, further liberating free trade, the service industry and the Internet economy.

“The Greater Bay Area should be the fourth period of cooperation if institutional innovation, deepening integration and free trade are attained,” said Wang, suggesting the introduction and coordination of a support system on the national level to establish a uniform and open market in the region.

“In Shenzhen, for example, bold experiments with local legislation should be encouraged and an environment created where mistakes and failures can be tolerated, thus revitalising the zeal of reform,” he said. “What we need to do now is kindle the flame.”