By Wu Ziru and Xie Ying 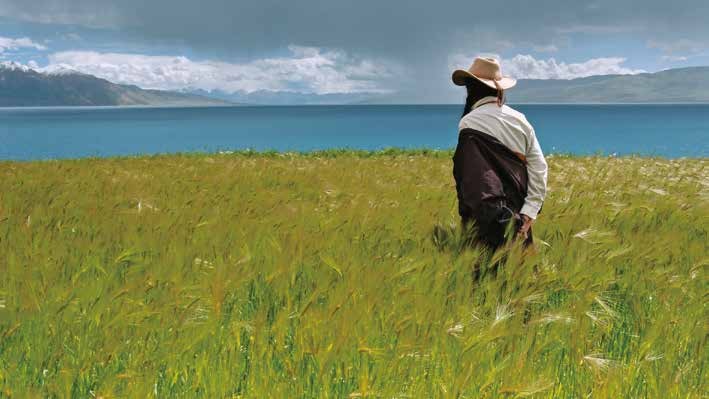 Unlike earlier Chinese films about Tibet that were strongly coloured by propaganda, Roof of the World is viewed as a pioneering documentary that presents the region through the eyes of its people

Carrying a barrel, a Tibetan lama lumbers slowly through the desert. He passes a hill and approaches the camera, to the sound of soothing, solemn background music. This is a fragment of Roof of the World, a recent Chinese documentary about life on the Qinghai-Tibetan plateau, produced by State broadcaster CCTV in ultrahigh definition.

The camera follows the lama as he joins others in making a sand mandala, a piece of Buddhist art created from millions of grains of coloured sand meticulously arranged into an image. This was one of the first times this delicate religious practice has been allowed to be filmed – lamas from a local Buddhist university spent several months laying out the tiny particles until they illustrated an intricate world of Buddhist statuary. They did all of this work only to destroy it in the space of just a few minutes’ time, leaving the audience to wonder about its religious significance – some people believe the practice demonstrates the transience of existence, a concept which lies at the heart of Buddhism.

“It would seem too planned if we filmed the mandala process alone. Yet when the mandala became a part of the life of the Buddhist students we were filming, it felt more natural,” said Zeng Hairuo, the documentary’s chief director.

Unlike previous Chinese documentaries about Tibet that gave a Chinese school textbook account of the region’s landscapes, geography, life and religion, Roof of the World has touched audiences’ hearts through an array of lively stories centred around local people, a change which is believed to demonstrate a big breakthrough for this kind of Chinese documentary.

Dubbed the “Third Pole,” the Qinghai-Tibetan plateau is the world’s highest, with an average elevation of 4,000-5,000 metres. It’s an attractive subject for documentary producers from all over the world. However, due to Chinese government restrictions, it has the reputation of a “forbidden zone” that is hard to access.

For a long time, China’s promotional materials portraying this mysterious place devoted themselves to showing how the local people were first liberated by the Communist Party of China and then, led by the Chinese government, engaged in construction and development. Audiences found this obvious propaganda bombastic and boring. Meanwhile, most independent producers are shut out of the region either due to the hostile local environment or due to the government’s ban – foreign producers from companies like the BBC and National Geographic, for example, are usually not even allowed to film nature documentaries in Tibet.

So it was a rare opportunity for chief director Zeng Hairuo to create something completely new when he accepted the task. “We wished to present the plateau in an international way and have promoted the documentary globally,” Zeng told ChinaReport.

“The materials were too abundant to form a theme; [with] the religion, the culture, the environment, the ecology and the people, and you know, there were many ‘minefields’ we knew we’d better not touch,” he continued. “It was really much more difficult than making a documentary about fighting against the Japanese invasion [during World War II],” said Zeng, who has produced many award-winning documentaries about the Second Sino-Japanese War (1937-1945).

After holding several large-scale seminars with a great many governmental and non-governmental experts, the production team finally defined the theme of the documentary as “humans and nature.” “We had to abandon the ideological way of filming. Even if we wanted to show how the government made contributions to this region, we should let the truth speak for itself [and] just film how local people lead their lives,” said Zeng.

“As the Third Pole of the world, the Qinghai-Tibetan plateau has multiple geographic features, such as snowy mountains, prairies and rocky cliffs, leading the locals to live a distinct life [from those living in the central plains]. This is the basic tone of our documentary,” he added.

Based on three months of in-depth research and investigation into the plateau, Zeng’s team chose around 40 stories from more than 100 options, each of which focussed on different people. Zeng told ChinaReport that they chose those who would not feel shy about showing their daily lives in front of the camera.

“We tried to make the scenery beautiful, but did not purposefully highlight it,” said Sun Shaoguang, the documentary’s director of photography who had previously stayed in Tibet for two years. “The real focus is the people living in such an environment.”

The 40-plus stories were split into the documentary’s five episodes. The first focusses on how the Tibetan people interact with local animals – from the cute, groundhog-like pika to ferocious wolves, from domesticated sheep to wild blacknecked cranes. The others detail how the locals struggle in the harsh climate, utilise water resources, preserve traditional culture and arts, and stand by their religious beliefs.

The narrative style struck a chord with viewers, with many flooding the Internet with their impressions of the documentary. For example, the audience experienced a sense of harmony between humans and animals when a Tibetan family fed meat from sheep killed by adult wolves to an abandoned wolf pup. The story of a Tibetan village using traditional carved blocks to print Buddhist sutras showed viewers a simple and contemplative aspect of local lives. Also, they learned more about the Zen spirit from an old, recently widowed Tibetan man who bought a sheep, which had been ceremonially exempted from slaughter in line with Buddhist practice, to accompany him as a spiritual companion. These are just a few examples of the documentary’s many interwoven threads.

On various online forums, the most frequently cited and circulated quote of the documentary is from a Tibetan woman who said that “only a kind heart is the best companion of the people. With a kind heart, nobody will feel confused or troubled.”

“Most of the previous literary or artistic products about Tibet played up the mystery and romance of the place, leading people to find it remote and strange. However, when you truly assimilate into the region, you will find the local people amiable, just like your neighbours,” Zeng told ChinaReport.

“That is the real Tibet we wanted to film,” he added.

Despite assistance from various government departments, the production team was still caught in numerous difficult circumstances while shooting, thanks to the formidable natural conditions on the plateau. According to Zeng, his production team spent more than a year shooting and faced a few life-threatening situations.

The experience that left the deepest impression was filming the residents in Pumoyum Co, the world’s highest village at about 5,100 metres above sea level, who were driving their sheep across a large, icy-bound lake. The migration happens at the coldest time of the year, and the air was so thin that everyone felt like they were constantly carrying around a 4060 kilogram bag of rice. Because of the difficulty breathing, the photography team members were not as talkative as usual. Many members, including director Zeng, had to go to the nearest hospital for treatment for severe altitude sickness.

But the final scene doesn’t reflect this danger: a panning shot instead shows several Tibetans leading flocks of sheep across the ice. The scene is shocking and solemn, set against the desolate surrounding environment.

In order to capture the best shots, camera crew members began to embrace the natural local conditions – they dove into the icy lake to film underwater despite the thin air, rode mules up to the Medog mountain village to film how the local people make traditional stone pots, and even climbed up a cliff to shoot honey gatherers, only to be attacked by a swarm of bees.

“We had about 60 cinematographers on the team and our cameras were running for over 200 days. All of us were under extreme pressure, both physically and psychologically,” said Zeng. “But we also quite enjoyed it.”

Sun Shaoguang, the director of photography, agreed. “We experienced many exciting moments. When I think about the shoot, I no longer feel the suffering, but rather remember it as interesting and legendary,” he said.

“Despite the hardships, I have to say that the experience of filming here was the most enjoyable of my life, since the local people were extremely tolerant toward our cameras – they just did what they would do under normal circumstances,” he added.

Due to limited funds and time, the production team has some regrets, the biggest of which, according to Zeng, was that they failed to capture shots of many animals that are closely related to Tibetan life, such as snow leopards and bears. Yet at the same time, they still believed that the documentary delivered.

Since it was released nationwide in late March 2015, Roof of the World has attracted a growing audience – on Youku, China’s equivalent of YouTube, for example, the documentary was viewed over 12 million times just two days after it was uploaded, and CCTV4 saw its ratings rise by 100 percent since it broadcasted the documentary.

Late last September, Roof of the World was made into a 90-minute film that aired at Canada’s China Tibet Culture Week two months later. The audience, composed mostly of Westerners, packed the screening rooms, and many spoke highly of the documentary. This enthusiasm was also seen among Chinese audiences when the film debuted at the 2015 Beijing International Film Festival in April. On douban.com, China’s most popular aggregator website for discussing literature and the arts, the documentary scored a coveted 9.1 out of 10 and earned around 700 viewer comments, most of which were positive.

“I was shocked by the stories in the documentary, which provided inspiration for my composition,” said singer and composer Xu Wei, who wrote and performed the documentary’s theme song. “The filming and editing are quite smooth and clean, and contain a large amount of information, just like music,” he added.

There are of course some criticisms, though they’re not as strong as the waves of praise. One netizen, for example, commented on douban.com that the stories are too loose and not profound enough. Another one remarked that he still sensed a whiff of propaganda. Nevertheless, the documentary, according to the producer Yan Zhanling, is a success in “making a Chinese documentary in an international way” – the production team has reportedly signed agreements with several foreign channels for overseas release, including National Geographic.

Zeng Hairuo told the media that he is planning to make a “second chapter” of Roof of the World, which will delve deeper into traditional Tibetan lifestyles. “I actually do not like it when people say that they want to travel there after watching the documentary,” he said in an interview with Shanghai’s Oriental Morning Post. “My purpose is to show the audience how to maintain a pure relationship with the environment and the people around them, just as the Tibetans do.”

Culture | by Shirong Chen The Play’s the Thing
Actors from the Chinese mainland and Hong Kong are returning this summer to London’s south Bank to stage Richard III and Macbeth in Mandarin and Cantonese. In the inaugural Year […]
China Report | by Li Jia and Liu Yutong Private Power
Despite unabated political tension, cultural exchanges between China and Japan have increased in recent months. These ties are expected to help ease diplomatic strain A 3,000-member Japanese delegation of tourism […]
China Report | by Rowan Williams and Shirong Chen Happy Music
One of China’s most successful composers has big plans for the future. Meet Xiao Ke, a soft-spoken man who hopes to bring his own musicals to London’s West End. “The […]