Down to the Roots of Economy

At the end of June 2015, China’s stock market lost more than a third of its peak value recorded just two weeks before. Trillions of US dollars in assets vanished and drastic volatility lasted for over two months. The government’s intervention, hesitant at first and then strong-handed, aroused controversy both domestically and internationally. The government-imposed “circuit breakers”, which shut down trading automatically when the market fell by a predetermined percentage, were triggered twice in early January 2016, once just minutes after trading began. Both the Shanghai and Shenzhen stock exchanges suspended the mechanism after four days of use.

On December 27, the Standing Committee of the National People’s Congress, China’s legislative body, granted a two-year authorisation to the State Council to try out a registration system for the capital market. Chinese companies that wish to raise funds through the Chinese stock market will no longer have to go through the lengthy process of getting approval from regulators, as they currently do under the existing Securities Law. Like companies in the United States, they will be able to go public as long as they have done their homework on information disclosure.

Recently calls for reshuffling the entire regulatory framework of China’s capital market have been unprecedentedly high.

The financial links connecting China with the rest of the world are bringing the two closer and closer together through capital markets. In his December 20 “letter to Santa,” Charles Li, CEO of Hong Kong Exchanges and Clearing Ltd. (HKEx), said HKEx was “getting ready for the opening of” its link with the Shenzhen Stock Exchange, a year after its link with the Shanghai Stock Exchange began operation. On November 18, China Europe International Exchange opened in Frankfurt, Germany, making the first yuan-denominated fund available in Europe.

How could this reform, expansion and chaos happen all at the same time? The future can be decoded by the past. Cao Fengqi, a professor at Peking University’s Guanghua School of Management and director of the university’s Research Centre for Finance and Securities, traced China’s capital market problems back to the market’s inception, and comments on how to propel it forward through reform. 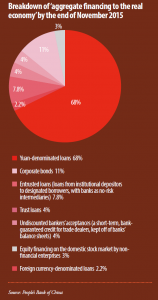 This has been proven by so-called ‘aggregate financing to the real economy’ statistics, [a Chinese index that represents] the total funds raised by Chinese enterprises from China’s entire financial
market. Between 2002 and 2014, it rose from US$300 billion to US$2.5 trillion. In 2002, 97 percent of the money was bank loans, and only 2-3 percent came from the stock market. While the share of bank loans was already down to 59 percent in 2014, the stock market contributed a mere 4-5 percent, only slightly higher than the 2002 figure.

This shows that other sources of financing, including foreign loans, borrowing through other intermediaries such as trust companies, or quasi-loans made through banks in other ways [mainly informal loans that aren’t on banks’ balance sheets], have taken over much of bank loans’ former arena. Neither corporate bonds nor the stock market have really advanced into the void left by banks’ retreat.

More than 25 years after China’s first IPO, listed companies hold nearly US$1.1 trillion in total funds, a figure that is tiny by any standard [e.g. compared with China’s GDP and the funds raised by Chinese companies on overseas stock markets].

CR: What has been keeping China’s capital market from functioning well?
CF: The fundamental problem lies in China’s capital market system. The purpose of establishing the market 25 years ago was to implement reforms on State-owned enterprises. The background then was that Chinese banks and budget funds could no longer feed heavily indebted state-owned enterprises (SOEs), so those SOEs turned to the stock market. In a market designed to raise money, companies never thought about how to reward investors.

Given this, there is an urgent need to address issues concerning China’s capital market system, including stock issuance and trading, dividends distribution, corporate governance and the regulatory framework.

CR: When you say the capital market needs further development, what do you refer to, specifically?
CF: Mainly the stock and bond markets. They are the direct links between investors and businesses, with no intermediaries. Listed companies own the money they raise from the stock market. They don’t owe. This is particularly important in supporting business startups and innovation. It is expected that raising capital through these two direct links will account for at least half of the total financing injected into the real economy, and down the road, maybe even more.

CR: What kind of capital market do we need in China?
CF: A well-functioning, diversified capital market is crucial to support China’s economic restructuring and urbanisation and to realise the country’s goal of doubling the 2010 national GDP by 2020. The capital market has to be built on market principles. That is not the case now. The China Securities Regulatory Commission does too much approval work and controls how many shares should be issued by which companies at what prices and when. The registration-based system for issuing stocks must be installed so that the market watchdog can focus on its proper duties, like cracking down on misconduct and defending the rights of investors.

Rule of law and transparency should prevail in the capital market. The existing Securities Law and Investment Fund Law are too general to be implemented effectively. The Securities Law is currently undergoing revision. Moreover, law enforcement is weak even when the law is clear. Illegal behaviours have gone unpunished in some cases.

Further internationalisation is our future path. When the Chinese yuan becomes an international currency and China’s capital account is open to the rest of the world, China’s capital market has to be strong enough to be the launchpad for Chinese companies and investors to join the global market.

Last but not the least, the boundary between the government and market has to be redefined. Government intervention is prevalent in China’s capital market, leaving little room for the market itself to play its role. The government can step in when the market fails, but the government must respect market rules. The government should confine its role to building the platform and providing services to it. Anything beyond this should be left to the market, where companies and investors make the judgement calls.

However, the financial market has become increasingly integrated, making a fragmented regulatory framework very problematic. For example, consumers’ money kept in [major Chinese payment platform] Alipay is invested in the money market [in safe, short-term debt securities] through Alipay’s partnership with Tianhong Asset Management, which also engages in peer-to-peer business. Which regulator is responsible for such a cross-sector operation? The joint meeting of the People’s Bank of China, the central bank, and the three market watchdogs, a cooperative mechanism established in 2013, decided that “each parent should take care of their own kids.” It means that each watchdog should identify the particular part of the operation that they are responsible for and put it under scrutiny. However, now it is nearly impossible to distinguish whose “child” is whose.

In this tangled market structure, relevant ministries fumbled with the aftermath of the stock market chaos in mid-June 2015. They lacked coordination and tried to pass the buck on to the next guy. This serves as a lesson about how a fragmented regulatory framework can fail an integrated market.