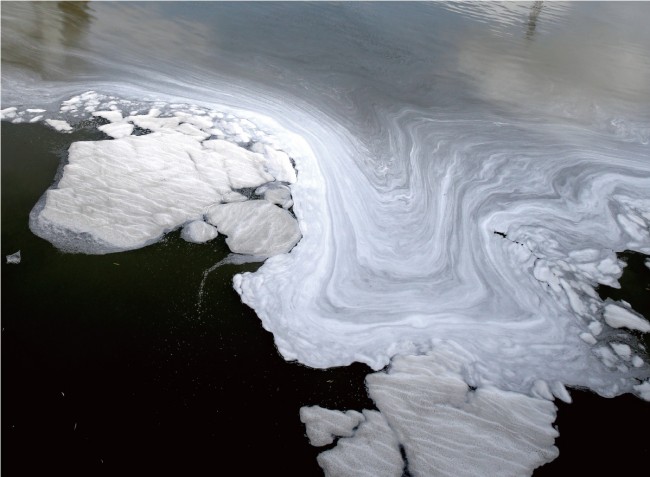 An increase in citizen reporting and NGO activity has exposed water pollution as one of the most hazardous side-effects of China’s economic miracle. With heavy-polluting industries often forming the backbone of local industry, can the government’s new action plan on water pollution clean the pipes without blocking the flow of development?

On April 6, 2015, Jin Zhongyi, director of the Haining Justice Bureau in Zhejiang Province, posted photos taken that day of a section of the local Qiantang River on Weibo, China’s Twitter equivalent. The river water in the photos, rushing out from a dam, appeared jet black. In a telephone interview, Jin told ChinaReport that his immediate impression was that enterprises in the upstream Xiaoshan area must have been dumping illegal waste water. With over one million Weibo followers, Jin’s post was soon reposted hundreds of times, arousing the attention of the local Zhejiang provincial environmental bureau.

Given that water pollution has been a chronic problem for over a decade in China, photos of dirty rivers are nothing new. However, Jin’s Weibo post happened to almost coincide with the April 16 release of the State Council’s Action Plan for Water Pollution Prevention and Control, a document long-awaited by environmentalists, aimed at taking the fight to those who pollute the country’s water.

“From 2010 to 2012, over 50 percent of GDP in Hangzhou was contributed by high polluting, energy-intensive industries including chemical manufacturing, printing and dyeing, and paper making, most of them located along the Qiantang River, ” Hu Wei, Hangzhou Environment Protection Bureau chief said at the annual Zhejiang Province “Two Sessions” political conferences in 2014. Hu further explained that since such industries
consume and discharge large amounts of water during production, they prefer to build factories closer to scaled rivers or waterways. Low water costs are a significant economic benefit, and these enterprises have developed into local pillar industries. Indeed, Hangzhou’s Xiaoshan District, upstream of the inky river photographed by Jin Zhongyi, is famous for its printing and dyeing industry.

The Action Plan addresses the phenomenon of industrial water pollution on a national scale: approximately 80 percent of China’s chemical and petrochemical projects are located along rivers in regions with a high population density. Of the 98 major pollution incidents in 2014, 60 were related to water pollution, and the number of “mass incidents” – the Chinese government’s euphemism for public protests – caused by water pollution has seen a significant increase.

Facing a severe pollution threat from manufacturing industries, the plan makes the crackdown on industrial pollution the top priority of its total 35 major measures to combat water contamination. As part of the plan, many small companies that fail to meet modern pollution standards could be forced to close. The document calls for the closure of small plants that fail to meet pollution control standards, including paper mills and oil refineries, by the end of 2016.

Meanwhile, 10 major industrial sectors, including paper-making, coking, nitrogen fertiliser manufacture, non-ferrous metals, dyeing and printing, food processing, API (active pharmaceutical ingredient) production, pesticide production, tanning and electroplating, will be put under special scrutiny as they adapt to clean production methods. Authorities will issue warnings to companies that discharge excessive levels of pollutants, and in some cases order the suspension of operations while improvements are made. If such companies still fail to meet standards, they will be forced to close. Starting from 2016, the authorities will publish the names of companies that have received warnings and have been shut down.

Such harsh measures are considered a concrete follow-up to the newly amended Environmental Protection Law promulgated on January 1, 2015, which will force operators in the relevant industries to prioritise waste water treatment. “Fines may do little to frighten polluters, but now they might face criminal charges, which will force them to pay attention to pollution control,” Wang Guoxiang, Deputy Chairman for Shanghai Electroplating  Association, told China Environment News in late April 2015.

Chen Yongqing, an official with the pollution prevention department of the Ministry of Environmental Protection (MEP), told China National Radio in mid-April that the rule would put industrial companies under public supervision.

“We will use different methods to supervise different companies. The rule will encourage companies to shoulder their social responsibility. Companies that obey the law will receive public recognition, while those that break the law will pay a heavy price,” added Chen.

The Action Plan will gradually eliminate “backward” industries, including small, unqualified companies, indicating a desire to steer the country’s economic development onto a more advanced and eco-friendly path. According to Chang Jiwen, vice-director general of the Research Institute for Resources and Environment Policies at the Development Research Centre of the State Council (DRC), only enterprises who obey the environmental law can survive this process, and thus local governments will be required to adjust their industrial structure.

The Action Plan, which was passed by central authorities on February 26, 2015, has been in development since April 2013, and draws on suggestions from 34 different government departments and assigns direct responsibilities to 15 different ministries. Aside from setting detailed pollution control measures in specific industries, the plan also requires cities to put extra effort into other aspects of water quality maintenance, such as treatment of “black and foul-smelling bodies of water,” and national tap water standards.

By 2017, major cities will be required to eliminate unsightly and foul-smelling bodies of water. Some major cities have already begun taking action on this front. In Beijing, for example, various sources confirmed to ChinaReport that a total 900 kilometres of the city’s waterways have already been cleaned, with another 680 kilometres to be cleaned within the next year. The notoriously sewage-filled Xiaozhong River in Beijing’s northeastern Shunyi District, for example, was undergoing a large-scale cleaning operation when ChinaReport visited in early May. Shunyi resident Li Yun said that the work had somewhat alleviated the bad odour in the area.

In terms of drinking water, the plan stipulates a comprehensive supervision process over water quality from source to tap, and encourages reform of water prices. Wang Jinsheng, with the National Environmental Emergency Response Team, said that these changes were significant. “There is now supervision of the whole process, which is a huge step forward. To ensure the quality of tap water, it is important to ensure the safety of the pipeline system. This will take huge efforts and manpower.”

Similar to the National Action Plan on Air Pollution Control issued on September 12, 2014, the plan states that the authorities will list the ten cities in China with the best and worst air quality once a year.

However, industry insiders told ChinaReport that some targets may be unrealistic. Xue Tao, deputy director of the Industrial Institute of the Environmental Academy of Beijing University and the E20 Platform, said that even in Beijing, water authorities are uncertain about the feasability of treatment of black and foul-smelling water. “Obstacles include both a lack of funding and a shortage of technological support,” added Xue.

China has increasingly strengthened investment in environmental protection in recent years. According to Zhang Yong, vice director from the National Development and Reform Commission (NDRC), China has invested a total of over 920 billion yuan (US$148bn) in soil management, air pollution control and clean water initiatives since 2014.

For example, in the printing and dyeing industry, a large number of enterprises across the country have been forced to close down or downsize production due to the pressure of pollution control.

Hu Kehua, from the China National Textile & Apparel Council, told ChinaReport that the plan is both an opportunity and a challenge for the textile industry. Scaled companies can normally benefit a lot insofar as they can upgrade their equipment and technology in time; yet for small or medium-sized companies, many would be forced to either merge with others or close down.

According to Xue Tao, the situation is compounded by China’s lack of affordable green technology. “The environmental industry market is very much divided. While private environment enterprises enjoy mature technology in certain fields like desulphurisation, denitrification and membrane technology, we have to admit the weakness of our existing technologies,” said Xue.

Enacting the government plan is expected to cost up to five trillion yuan (US$806bn) by 2020, creating nearly four million jobs in the process, potentially creating a boom in the water conservation industry.

Chen Yongqing expressed to the media that the implementation of the Action Plan would be beneficial in many ways by revitalising a flagging economy, creating new jobs and at the same time gradually improving water resources. “Water conservation, pollution control, ecological rehabilitation, ground water remediation, pipeline system construction… all of these will require a large amount of investment,” added Chen.

“The Action Plan is the central government’s promise to our society, the goals of which cover many complex issues. The responsibility to achieve these goals cannot be the government’s alone,” said Professor Fu Tao, director of Tsinghua University’s Water Policy Research Centre in mid-May, adding that the new dynamic will be “market-driven, with government guidance and participation from private enterprises and the public.”

It is estimated that in order to achieve targets around 4 to 5 trillion yuan (US$600-800bn) will be invested by 2020, of which around 1.5 trillion (US$240bn) will come from various levels of government, with the rest contributed by social capital. Xiu Jun from the China Development Bank recently told media that the plan could potentially create a market in the tens of trillions of yuan.

“Of course, there are many problems ahead,” said Professor Fu Tao. According to Fu, there is an urgent need for sound systems to combine social capital with government money, encourage technological innovation, assess performance and allow for government supervision. Presently, “build-operate-transfer” and public-private partnership models are most popular.

Since the release of the government plan, Fu Tao and his team have been holding forums in various major cities, inviting private entrepreneurs to explore cooperation possibilities with the government. However, due to the market’s newness, there is a tangible hesitance among private investors – most are keen to see detailed stimulus policies before taking action.

“The possibility for overall success is quite high,” commented Xue Tao. The government appears to be focussed on improving the environment and supporting service providers in the environment sector – an Action Plan for Soil Pollution Control is expected within the year. While the effects of the water plan may take some time to be felt, it will not likely be due to inaction.

China Report | by Li Teng and Wang Yan In Nature’s Name
Government officials have been caught profiting from composing fabricated environmental assessment reports, a practice that the Ministry of Environmental Protection has finally vowed to curb. ChinaReport speaks to whistleblowers who […]
China Report | by Wang Yan An Inevitable Flashpoint
An explosion at a controversial PX chemical plant, its second accident in 20 months, has further fuelled criticism of ongoing government support for construction of potentially dangerous and environmentally unproven […]
China Report | by Wang Yan Breaking the Silence
An independent documentary discussing China’s air pollution problem, released online in February and erased from most video sharing websites in March, has rekindled debate over how best to tackle the […]