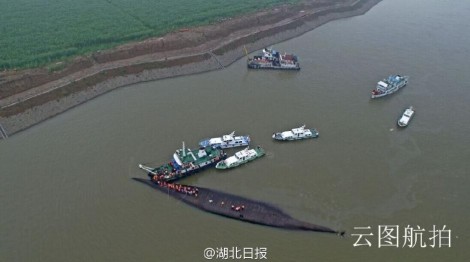 In China, five people have died and hundreds more are missing after the capsizing of a cruise ship carrying 458 people on the Yangtze River in Hubei province. The ship, the Eastern Star, is reported to have capsized around 10pm on Monday night at such speed that no emergency message was sent by the captain or crew. Authorities were only alerted to the ship’s capsizing after survivors had swum ashore. The ship’s captain and chief engineer have both survived, and have been detained. They claim the ship, en route to Chongqing from Nanjing, had been caught in a cyclone while many of the passengers were sleeping. While the majority of passengers were tourists aged between 50 and 80, passengers as young as 3 years old are reported to be on board. Rescue attempts are ongoing, though divers have struggled to operate in the river’s opaque water. The boat capsized in the Damazhou section of the Yangtze. At least 14 people have been rescued so far, and a salvage ship has been dispatched to right the capsized ship. Rescuers have been seen cutting into the ship’s hull to rescue those trapped inside.

Charles Kennedy, the former Leader of the Liberal Democrat Party, has died in his home in Scotland at the age of 55. Kennedy, who led the Liberal Democrats from 1999 to 2006, led the Lib Dems to their best ever election result in 2005. Kennedy stepped down as leader in 2006 after revealing a long-standing alcohol problem, and lost his seat in the 2015 general election to the Scottish National Party. He opposed his party entering a coalition government with the Conservatives, and did not play a significant role in the coalition government from 2010-2015. Kennedy was notable for leading the opposition to the Iraq War of 2003, his informal nature, and what some have described as a distinct absence of political cynicism. Britain’s leading political figures have paid tribute to Kennedy.

Greek Prime Minister Alexis Tsipras says he has issued a realistic proposal to Greece’s creditors in an attempt to secure a deal on the country’s debts. Tsipras’ statement comes in the wake of talks attended by the heads of the International Monetary Fund (IMF) and the European Central Bank (ECB) in Berlin. France’s President Hollande and Germany’s Chancellor Merkel also attended the talks, which aimed to defuse Greece’s financial crisis. Tsipras did not attend the talks, and says he has not been contacted by the IMF or ECB. Athens currently faces insolvency and must make €1.6 billion in payments to the IMF within the next few weeks, with the first payment of €300 million due by Friday. Greece also has the option of making the repayment in bulk at the end of June. Tsipras has said that his plan for Greece includes difficult concessions.

A mix of stories makes the headlines today. The Times leads with news of a “split” in the Conservative cabinet, as the Prime Minister “refuses to cut benefits”. The Prime Minister has “slapped down” colleagues wanting to cut child benefit, the paper writes, with a “Black hole” in the government’s £12 billion welfare savings plan still to be addressed. The Daily Telegraph leads with a statement from Health Secretary Jeremy Hunt saying that the NHS “has enough cash, now it must deliver”. According to Hunt, “lack of funding can no longer be used as an excuse” by the organisation. The Guardian leads with a report entitled “Shoot to kill: a US horror story”, which investigates shootings by the US police force. 464 people have been shot dead by police in the US this year, the paper writes, with 102 unarmed, and a large “disparity between numbers of black and white victims”. The Independent leads with news of a “Radical plan to put coal out of business”. According to the paper, a group of “Leading academics and economists” plans to combat global warming by launching a research initiative to make green energy cheaper than coal power within ten years. The Financial Times leads with news that US corporate deals have smashed “records set in dotcom and debt booms”, with US$243 billion worth of deals in May. The high volume has been fuelled by “Cheap credit and bullish boardrooms”, the paper writes.

On the Yangtze River capsizing: the capsizing of a cruise ship in the Yangtze River with 458 people on board has received considerable media coverage from UK media outlets. The BBC features a video report on the story, and also writes that the capsizing “will resonate widely”, given that the ship is “full of everyday tourists”, and has been “lost in the waters of the country’s best-loved river”. The Daily Telegraph writes that “Hopes were raised” by the sound of calling from within the ship, and also features a live update feed on the crisis as well as a video report. The Independent writes that over “50 boats and 3,000 people have been involved in the search effort”. The ship’s drifting downstream means that there is still enough air in the ship to give it buoyancy, the paper writes. The Guardian reports that “heavy rain and strong winds” are hampering rescue attempts.